Getting Your Feet Wet

by Barbara Early
I did something this week which required considerable faith. Something that, considering the circumstances, didn’t make a lot of sense: I planted seeds.

Now, I’m not talking about metaphorical seeds, such as seeds of kindness, seeds of change, or seeds of opportunity. I’m talking about literal seeds. In particular, strawberries, a few varieties of lettuce, and several types of peppers.

Now opening the little paper envelopes and burying seeds under the soil in the starter kit wasn’t very difficult. Neither was watering them or placing them in a sunny area of my living room. Yet it was an act of sheer faith. The reason? While I am writing this, temperatures are sinking into the teens, and my backyard is covered with a fresh coat of snow. And if the mercury doesn’t climb considerably before the seedlings get too big, I’m going to look a little foolish. I mean, what if spring never comes?

Even though sometimes it feels like winter weather will last forever, warmth is surely coming. I didn’t have to talk myself into it, or hype myself up. Now, I guess I could be assured that spring is coming simply because it arrives every year, but there is an even better reason: God promised.

While the earth remaineth, seedtime and harvest, and cold and heat, and summer and winter, and day and night shall not cease. Genesis 8:22

In fact scripture is filled with even more dramatic and exciting examples of people stepping out in faith, acting in opposition to circumstances, having only the promises of God to count on.

Noah built a boat long before it began raining, simply because God had told him it would. Joshua and the young nation of Israel marched around Jericho holding trumpets, probably looking a little sheepish after day three or four. Yet God’s direction and promise had been clear.
﻿
﻿﻿ 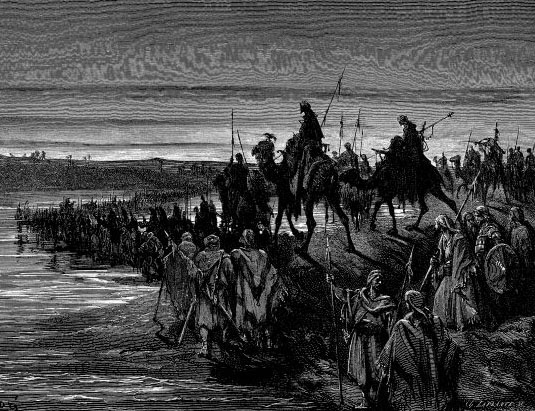 "The Children of Israel Crossing the Jordan" by Gustave Dore (d. 1883)
﻿﻿﻿One of my favorite stories of faith involves the crossing of the Jordan. The young nation of Israel had been wandering in the desert for forty years, led by Moses. Now under the leadership of Joshua, they needed to cross the Jordan River to finally get to their destination. Yet when they arrived, the rivers were flooded over their banks. God promised He would part the waters of Jordan when the feet of the priests carrying the ark touched the water. I can just imagine them walking toward the bank. If I were carrying the ark, I’m sure I’d be watching the surface of the river. And as we stepped closer and closer, I’d be looking for some kind of change—some sign the waters were receding. Yet the level didn’t go down. No currents on the surface indicated any change. It was only after they stepped into the water, that God parted the river and allowed them to walk through on dry land. They had to get their feet wet!

Scripture is filled with all kinds of wonderful promises. And those promises might be comforting to hear and ponder over, but they hold their most value when we step out—acting like we really believe them.

God has promised to never leave us (Hebrews 13:5). So in the dark times, when I feel most alone and discouraged, I can trust that He is only a prayer away. I need not despair.

God has promised to supply all my needs (Philippians 4:19). So when I have need of anything, I know He will not leave me helpless.

I don’t know how many promises there are in the Bible. One commentator said 365, another said there are thousands. I do know that God will never forget or fail to complete that which He has promised.

Simple question: Are you planting anything this year? Flowers or vegetables?

Harder question: Has God impressed on you the need to step out in faith in some area? To get your feet wet? Which scriptural promises are you relying on?

Barbara Early grew up buried in the snowy suburbs of Buffalo, NY, where she developed a love for all things sedentary: reading, writing, classic movies, and facebook scrabble. She holds a degree in Electrical Engineering, but her penchant for the creative caused her to run away screaming from the pocket-protector set. She taught secondary English and science for several years in a Christian school before home schooling her daughter successfully through high school. Barbara cooks up cozy mysteries with a healthy dose of comedy, and was a double finalist in the 2010 ACFW Genesis competition. When not reading or writing, she enjoys cooking, crafts, home-improvement projects, and spending time with her husband and daughter.
Posted by Barbara Early at March 27, 2011