In choosing a topic for a current event post, I certainly had a wealth of subjects to choose from. There's the downgrading of the government credit rating, a deadly helicopter downing in Afghanistan, riots in London, wild weather, and an ever-present wealth of crime, mayhem, and tragedy. It's almost too much. 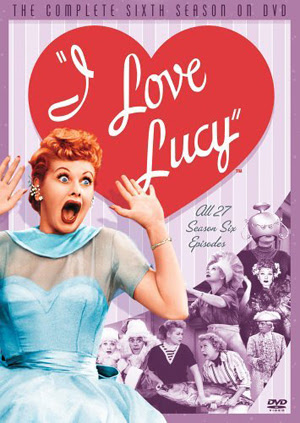 So I chose something lighter. Let's take a brief respite in the onslaught of bad news, to consider a frowsy redhead from nearby (to me) Jamestown, NY.

This weekend marked the 100th birthday of Lucille Ball. And Jamestown reveled with parades, tributes, shows, and an attempt to break a world record for the most Lucy impersonators in one location.

So why are we still talking about Lucy?

One thing I learned from Lucy is to persevere until you find your niche. Lucy tried her hand in a number of different showbiz roles. She left drama school after being told she had "no future at all as a performer." She was a disaster as a showgirl, getting repeatedly fired. Her movie roles led to her briefly claiming the title of the Queen of the B's. Yet her comic role on television as the American wife of a Cuban bandleader won the laughs and hearts of Americans for generations. And she did it, oddly enough, without strong language or er..."adult" themes deemed necessary by many of today's comedians.

I'm happy that I have brought laughter because I have been shown by many the value of it in so many lives, in so many ways. --Lucille Ball

Lucy also teaches us the power of laughter, and we love her because she makes us laugh. I Love Lucy has been in syndication since its original airing, so Lucy has been with us continually during every crisis and tragedy: during the Korean conflict , the Vietnam War, and both Gulf Wars. She was with us through 9/11, when we finally were able to unglue from the repeated showing of the devastation and the aftermath. She's been watched in prisons, hospitals, nursing homes, and shelters, and in many other languages on televisions throughout the world.

Now some might say that laughter is frivolous, that it only distracts us from the important things that demand our attention. And when taken to the extreme, that might be the case, as much as a diet of pure sugar is bad for the body. But taking time to laugh can reduce stress, and studies say, can reduce heart disease.

In fact, the Bible also attests to the power of mirth. Proverbs 17:22 says, "A merry heart doeth good like a medicine: but a broken spirit drieth the bones."

So while we have problems (and who doesn't!), yes, we need to pray, seek God's face, and deal with situations. But when that's done, it doesn't help to worry and stew. It's okay sometimes to take a break and laugh.

So have one on Lucy:

Questions for discussion: What is your favorite Lucy episode? Have you ever had a real life Lucy moment you'd like to share? Has laughter ever eased your difficult times?

Barbara Early grew up buried in the snowy suburbs of Buffalo, NY, where she developed a love for all things sedentary: reading, writing, classic movies, and Scrabble. She holds a degree in Electrical Engineering, but her penchant for the creative caused her to run away screaming from the pocket-protector set. Barbara cooks up cozy mysteries with a healthy dose of comedy and sometimes a splash of romance, and was a double finalist in the 2010 ACFW Genesis competition. Her novella, Gold, Frankincense, and Murder, will be released this holiday season from White Rose Publishing. When not reading or writing, she enjoys cooking, crafts, home-improvement projects, and spending time with her husband and daughter.
Posted by Barbara Early at August 08, 2011