What do you get when you cross Jane Austen with Indiana Jones and sprinkle in just a pinch of 1940s screwball comedy? 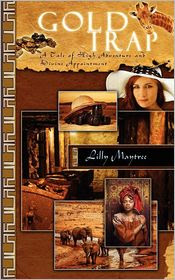 If you do it right, I think you get Gold Trap.

Subtitled “A Tale of High Adventure and Divine Appointment,” Gold Trap has some unique elements.  Let’s start with voice. The story is told in a close third person through the viewpoint of one Megan Jennings. While set in the present, Megan is a voice from the past. In fact, the purpose of this teacher’s high adventure is to follow the steps of her personal hero Mary Kingsley, Victorian writer and explorer, whom Megan emulates in speech, dress, and primness.

Of course those steps lead to Africa. And Megan’s most economical way of getting herself and her video cameras there (she wants to make a documentary) is to enroll in a Voodoo tour. So add to the mix an eclectic assortment of tourists and guides--with a psychic, a kindly but hard-drinking professor, and few con men thrown in.

Megan doesn’t get to spend much time on the packaged tour, however.  When the professor is kidnapped, his son, a handsome documentary producer, arrives and accuses her of involvement. And the two search for the old man, braving the wilderness alone. Um…yeah, there’s romance too. Megan’s divine appointment is about to take her life in a totally new direction.

Yes, it sounds like a quirky little story--and it is. And I mean that in a good way. Without a bonnet in sight, the location, voice, and characterization are different from most of what one encounters in Christian fiction today. And that, Dear Reader,  is precisely the point.

It also has one of the best book trailers I think I’ve seen.


I asked Lilly if there was a message in her novel that she wanted readers to grasp. She said,

I suppose for GOLD TRAP it would have to be that not only does God have a plan for our lives that is better than anything we could dream up, ourselves, it is also something we will love doing. Because He has created and equipped us for that very thing. “Divinely appointed,” you might say. A lot of us have a hard time believing that, though. But when you think about it, what could be more wonderful?


Read the rest of my in-depth interview with Lilly on my blog: Faith, Fiction, and the Occasional Felony.

Question: What do you like to see in a book that's a little out of the ordinary? Has anything surprised you in a book recently?

Disclaimer: I should disclose that the book is published by Harbourlight, an imprint of Pelican Book Group who are also my publishers, and I was provided with a copy by the author for the purpose of review.

Barbara Early grew up buried in the snowy suburbs of Buffalo, NY, where she developed a love for all things sedentary: reading, writing, classic movies, and facebook scrabble. She holds a degree in Electrical Engineering, but her penchant for the creative caused her to run away screaming from the pocket-protector set. Barbara cooks up cozy mysteries with a healthy dose of comedy and sometimes a splash of romance. Her holiday novella, Gold, Frankincense, and Murder will be released from White Rose Publishing in time for the holiday season. You can learn more about her writing on her personal blog: http://barbearly.blogspot.com/ or see what's for dinner on her recipe blog: http://bflogal.blogspot.com/.
Posted by Barbara Early at November 19, 2011