Earlier this year, Deb wrote on the trend of one-wording, choosing a word that capsulizes your goals or struggles of that year. Her word was "trust." I thought about it for a bit, and chose the word “focus.”

Admittedly, I have issues with focus. I have diverse interests, and it’s not uncommon for me to flit from one area of interest to another, without making meaningful progress on any. Whatever one may choose to do--writing a book, sewing curtains, constructing shelving units, starting a new diet and exercise program--goals cannot be mastered without a degree of focus, staying with one task until its completion, not jumping from task to task like a bee collecting pollen.

Let me introduce myself. Buzz. Buzz.

I’ve been having a terrible time, of late, sticking with tasks. Not that I lack discipline. (At least I don’t think I do.) And not that I lack the ability to complete them. (At least I hope I don’t.) I just need to Focus. Narrow down my energy to what is important--and then finish--before going on to the next interesting endeavor. Sounds simple enough.

Only God took my simple, attainable one-word, and turned it into so much more.

This past Sunday, a dear brother stood up in church to sing a solo. Before he began, he gave a brief testimony on what the song meant to him. It had a profound impact on me, so I asked him if I might share it.

More than a decade ago, my precious Maddie was desperately ill, and neither of us wanted to be in this situation. We were both praying for her to be healed, and one day in prayer, God's Holy Spirit broke through my torrent of words to show me another way. Using images, rather than just words, this scene played out in my mind:

I was standing in a long line in an opulent hall. At the front was a long table laden with precious gifts that looked to me like gold, jewels and treasures of priceless beauty. Rumors filtered down through the line that Jesus Himself was giving gifts to His faithful followers. I watched as person after person walked by, leaving the table with his gift, each beaming with inexpressible joy.

Then, I could see Him myself, and watched as His scarred hands took gift after gift, putting each into the hands of its recipient. At last, I was there in front of Him, eagerly awaiting the gift He would place into my hands. As I looked down at it, to my horrific disappointment, it appeared to be just a lump of dirt! I cried out in protest, but my wails were cut short by his voice chiding me. 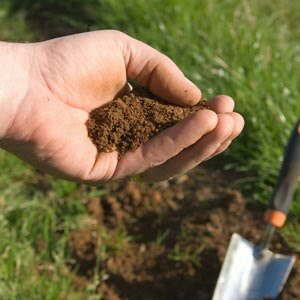 "Tom, you've been looking at all these gifts, and have fallen into covetousness because of it. Now stop looking down at your hands, and look up into My Face."

As I did, I saw overpowering love in his Eyes, and I understood that the gift He had chosen for me was the best possible expression of my Savior's love, given at exactly the right time, for the best possible result. And I understood that it is far more important to trust in the Holiness of the Giver of gifts, than to get the gift I thought I wanted.

In retrospect, I realized that many--possibly most--of the gifts that appeared to me to be treasures, had looked like lumps of dirt to their respective recipients, but were then perceived as treasures once the look of love in the face of Jesus changed each recipient's perspective, as mine had been. And that gratitude is not necessarily the inevitable result of getting what I want, but is rather a decision I make to accept with thanksgiving whatever the Lord provides, because I can trust His Wisdom, Power, Love and Unchangeable Grace.

And then he sang this song:

O soul, are you weary and troubled?
No light in the darkness you see?
There’s a light for a look at the Savior,
And life more abundant and free!

Refrain
Turn your eyes upon Jesus,
Look full in His wonderful face,
And the things of earth will grow strangely dim,
In the light of His glory and grace.

Through death into life everlasting
He passed, and we follow Him there;
Over us sin no more hath dominion—
For more than conquerors we are!

His Word shall not fail you—He promised;
Believe Him, and all will be well:
Then go to a world that is dying,
His perfect salvation to tell!

The testimony and the song reinforced one word in my heart: focus. But with a new direction.

The focus I needed was not just focusing on one task to completion. It was a pure focus on the face of Christ. On the face of Him who demonstrated the supreme love for me through his sacrifice, and who merits the focus of my love in return.

How could one focus on complaints, troubles, or even ambitions, and still look into the eyes of Jesus? And so all the Christian virtues--trust, gratitude, patience, love--all come to fruition when focused only on the face of Christ.

I could end the story there. And I had planned to. But there’s more. So if you’ll bear with me for a few more minutes.

When I was finding the lyrics to “Turn Your Eyes Upon Jesus,” I came across a note, that Helen Lemmel’s hymn was inspired by the words of Lilias Trotter, who wrote, “So then, turn your eyes upon Him, look full in­to His face and you will find that the things of earth will ac­quire a strange new dim­ness.” The source of this quote? A gospel tract entitled "Focused."

That got my attention. Although I have to admit--it was probably a good example of the lack of focus that I confessed to earlier--that I was soon hot on the Google trail, looking for more about Lilias Trotter and this tract.

I found the tract, but also a little history. Lilias Trotter, it seems, held great promise as an artist. John Ruskin, famed art critic, once believed women incapable of being truly great artists, but after meeting Trotter and seeing her work, predicted that with study, Trotter “would be the greatest living painter and do things that would be immortal.”

Lilias Trotter never achieved this potential--at least not with her painting. The reason is perhaps best explained in her tract entitled “Focused.”   It begins…

It was in a little wood in early morning. The sun was climbing behind a steep cliff in the east, and its light was flooding nearer and nearer and then making pools among the trees. Suddenly, from a dark corner of purple brown stems and tawny moss there shone out a great golden star. It was just a dandelion, and half withered - but it was full face to the sun, and had caught into its heart all the glory it could hold, and was shining so radiantly that the dew that lay on it still made a perfect aureole round its head. And it seemed to talk, standing there - to talk about the possibility of making the very best of these lives of ours.

For if the Sun of Righteousness has risen upon our hearts, there is an ocean of grace and love and power lying all around us, an ocean to which all earthly light is but a drop, and it is ready to transfigure us, as the sunshine transfigured the dandelion, and on the same condition - that we stand full face to God.

Later, she talks about focusing on the best, and letting all else fall out of focus. Apparently, in comparison to God and his service, her love of art grew pale.

And Satan knows well the power of concentration; if a soul is likely to get under the sway of the inspiration, "this one thing I do," he will turn all his energies to bring in side-interests that will shatter the gathering intensity. And they lie all around, these interests. Never has it been so easy to live in half a dozen good harmless worlds at once - art, music, social science, games, motoring, the following of some profession, and so on. And between them we run the risk of drifting about, the "good" hiding the "best" even more effectually than it could be hidden by downright frivolity with its smothered heart-ache at its own emptiness.

Trotter never encouraged people to weed out these things that take our focus from Christ, as if they were some legalistic list of sins to be avoided, but rather entreats us to focus on Christ, and predicts that, compared to his glory, all these other things will grow dim.

I’ll be the first to admit. It’s a scary proposition. And my lower lip is already sticking out as I think of things that are likely to fall away first. Mostly good and harmless things.

When thou saidst, Seek ye my face; my heart said unto thee, Thy face, LORD, will I seek. Psalm 27:8

Questions for discussion:
Easy: Have any tasks that you need to focus on completing?
Harder: We live in a world that has even more “side interests” than Trotter could have begun to imagine. How can we ensure our focus is on Christ?

Barbara Early grew up buried in the snowy suburbs of Buffalo, NY, where she developed a love for all things sedentary: reading, writing, classic movies, and Scrabble. She holds a degree in Electrical Engineering, but her penchant for the creative caused her to run away screaming from the pocket-protector set. Barbara cooks up cozy mysteries with a healthy dose of comedy and sometimes a splash of romance. Her holiday novella, Gold, Frankincense, and Murder was released in e-book format from White Rose Publishing in December 2011. You can learn more about her writing on her personal blog: http://barbearly.blogspot.com/ or see what's for dinner on her recipe blog: http://bflogal.blogspot.com/.
Posted by Barbara Early at February 10, 2012