Now that Thanksgiving is over, the holiday shopping season begins in earnest--not that it even waited for Thanksgiving to be over this year. It seems as soon as the turkey is cleared off the table, thankfulness is forgotten, and the mad dash to accumulate more stuff begins.

Now, like most people, I do buy gifts for a small group of family and friends--and I’ll admit to taking advantage of the markdowns to purchase things for the home, But I loathe crowded stores. So I’ve reverted to online shopping. Cyber Monday works great for me. I can sit in the couch in my jammies, steaming cup of coffee in one hand, while I click from store to store, department to department, filling virtual shopping carts. In a few days, a doorbell and a large thump alert me that the poor UPS and/or FedEx man (yes, they have met in my driveway) has dropped another load. Since I live in a rural area, and it’s a drive to the stores, I figure it saves me both time and money.

Sometimes there’s a little trepidation buying things sight unseen. Will those towels be as soft as the reviewers suggested they were? (Yep, they’re great.) Will that inexpensive dining room set be as lovely and as sturdy as the picture and reviews say? (Absolutely--my largest sight unseen purchase to date, and it’s wonderful.) Will those energy efficient light bulbs arrive unbroken? (Not a chance. Mailed those shards of glass right back.)

I have friends who never shop online. Too dangerous, they say. They want to be able to see and touch and smell the items they’re buying ahead of time. And that’s OK, I guess.

Now, you might be wondering why I’m talking about internet shopping on a day when we generally blog about faith. I’m getting there.

In the New Testament, shortly after Jesus’ death, the disciples met in an upper room--to console each other and discuss the reports that some had seen Jesus alive. When Jesus appeared to them, they were afraid at first, but later joyful.

But one disciple wasn’t with them. Thomas.

Something makes me think Thomas wouldn’t have made a good internet shopper.

When Jesus appeared to the group again, eight days later, Thomas was there this time. Jesus said to Thomas, “Reach hither thy finger, and behold my hands; and reach hither thy hand, and thrust it into my side: and be not faithless, but believing.”

Now Thomas believed, but Jesus went on to say, “Thomas, because thou hast seen me, thou hast believed: blessed are they that have not seen, and yet have believed.”

Now, Paul wrote that to the Corinthian church. This was a Gentile church, and most people had learned of Christ second and third and fourth-hand. They’d never seen him or heard him, met only a few who had, and didn’t, at that point, even have a fully complete Bible to read about him. 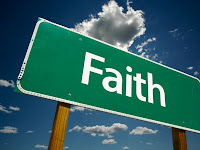 And yet they believed--not only trusting Christ for salvation, but even suffered persecution for that faith.

Now it’s OK to be a little nervous while trusting God--if that even makes sense. God can help our unbelief if that’s what we want. But as Christians, we need to do a lot of believing sight unseen. We believe God exists, even though we’ve never seen Him. We believe Christ was born of a virgin, lived a perfect life, never sinned, yet died for our sins--even if we never witnessed any of that personally. We believe we have a home in heaven waiting for us, even though we have only the vaguest of descriptions. And that Jesus will one day return for us, but we don’t know when.

But personally, we also trust him to guide our paths, to reign victoriously in our lives in spite of our circumstances, to help us deal with the difficulties of life and even deal with other people. We know He will direct us as we make decisions and He will comfort us in distress.

Question: Do you shop online or prefer stores? Buy anything Black Friday or Cyber Monday? And more seriously, what are you trusting God for?

Barbara Early grew up buried in the snowy suburbs of Buffalo, NY, where she developed a love for all things sedentary: reading, writing, classic movies, and Scrabble. She holds a degree in Electrical Engineering, but her penchant for the creative caused her to run away screaming from the pocket-protector set. Barbara cooks up cozy mysteries with a healthy dose of comedy and sometimes a splash of romance. Her holiday novella, Gold, Frankincense, and Murder was released in e-book format from White Rose Publishing in December 2011. A three-book cozy series from Berkley (Penguin) is slated to be released starting in spring 2014 under the pen name Beverly Allen.You can learn more about her writing at www.barbaraearly.com
Posted by Barbara Early at November 29, 2012