Dolled Up to Die by Lorena McCourtney 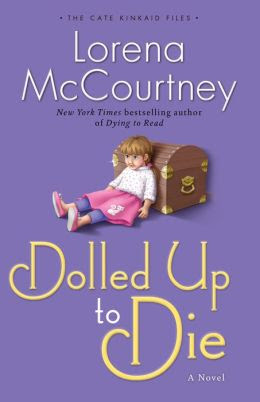 We can only do so many reviews here on Inkwell, but what happens when two of us discover we’re getting ready to review the same book? A panel discussion, of course!

The book? The second in Lorena McCourtney’s new cozy mystery series about assistant private investigator Cate Kinkaid. Susan Johnson and I sat down over a cup of tea to share our impressions. Well, virtual tea.

Barb: Cozies are often an escape for the reader. Quirky characters and settings draw us in. I particular enjoyed the mostly glass house they nicknamed the Ice Cube. I'd love a tour of the place. Was there a particular person or place in the book that stood out to you as a person you'd like to meet or a place you'd like to go?

Suzie: I really enjoy cozies as long as the characters aren't too quirky. There was a series I used to enjoy with quirky characters, but somewhere around book number five, their behavior bordered on lunacy and their quirks were no longer enjoyable little side-stories. Instead they were obnoxious and quickly heading toward stupidity, so I stopped reading that series. I am SO happy to report that the quirks in Lorena McCourtney's Dolled Up to Die are not zany. They are just the right mix to keep me pleasantly entertained.

Barb: Like the woman who makes the life-sized dolls, such as the one on the cover.

Suzie: I liked the vision of the Ice Cube, as well. But where I really wanted to tour was Octavia's house. It sounded so fun for her, that I just know if I told my husband about it he'd probably try to build one for Cleo Junior.

Barb: Ah, a house specially designed for a cat in mind…

Suzie: Why is it, do you think, that a lot of mystery writers include a cat in their novels? Oh, and I look at that cat as a character it its own right.

Barb: Oh, absolutely. And Kate's cat Octavia, whom she adopts in the first book after her owner is killed, is a great example. In some mysteries the cats solve the case. There’s something both cozy and mysterious about cats. They’ve been standard fare since Koko and Yum-Yum came on the scene in Lillian Jackson Braun’s books, starting in 1966. Probably before that. My daughter bought me a framed quote for my office of Poe: I wish I could write as mysterious as a cat. So there’s a long history there.

Suzie: Considering all the different types of mysteries out there, do you prefer cozies with the amateur sleuth over mysteries with professional investigators or the hard-boiled police procedural?

Barb: Oh, I’m a cozy girl, through and through. I occasionally read the harder boiled stuff, but I love the cozy. They’re like coming home. It’s relaxing. I think I got hooked when I was spending a lot of time with my mother during her struggle with ALS. When you’re surrounded by trouble, you want an escape. And the hard-boiled stuff seemed depressing, with its gore and high body counts. Cozies, on the other hand…every night I could escape, even for a little while, into a small town with quirky characters and a nice puzzle to solve. Yeah, someone dies, but it’s not somebody we’ve gotten to know or like--and they usually have the decency to not bleed all over the pages.

Suzie: I love the amateur sleuth, myself. But I do have a hard time finding a series that holds my interest for long because of the wackiness that eventually gets out of hand. I'm happy that Lorena McCourtney is writing this series. She's done a stellar job, in my opinion. I really enjoyed the pacing and the multiple surprises. And I can't wait for the next book that I believe she's wrapping up right about now.

Barb: Something to look forward to!

Suzie: Writers often have to give their publisher a list of comparables - a list of books or authors, stating that the writer's book is aimed toward readers who like author A and author B. Considering that, Barb, do you have any comparables for Dolled Up to Die?

Barb: You know, for the past few years in Christian fiction, cozies have been scarce. I remember preparing to go to my first ACFW conference a few years back, and trying to find agent and editor appointments. As I was going down the list, I kept seeing “No cozies.” They’re as popular as ever, though, in the ABA market. New ones every month from Berkley. I would hope that Lorena’s success with this series--and her Ivy Malone series (which is also a good read) might signal a change in direction for CBA cozies.

Suzie: I do have one comparable. Years ago, Mindy Starns Clark wrote a series about a blogger named Tulip who fell into crime solving. I think readers who enjoyed that series would really love this one.

Barb: True. I enjoyed that series, as well.  And our own DeAnna has one coming out in less than a month--a historical which we’re going to be talking a lot about. Rules of Murder, written as Julianna Deering. It’s an historical, but it’s also a cozy in the sense that the detective is an amateur

Cozies usually have a main character who is not a professional crime solver. And Lorena’s Cate fits the bill, in that she is only an assistant private investigator with a lot to learn. How would you like to see her grow as the series progresses? How should she stay the same?

Suzie: I really like cozies where the main character is not a professional. I enjoyed Cate in both books, and I would like to see her eventually get her PI's license. But mostly, of course, I'd like her to find love. It's the romantic in me. I just can't help it. I'm kind of partial to the computer nerd as her love interest, so I hope he sticks around. What I really would like to see, if she does find true love, is a relationship where he is supportive of her career. I get a little bored when the husband or boyfriend nags and complains and worries about the ever-dedicated female sleuth.

Barb: I’d like to see the romance develop, but I do like to be teased a bit, too. Only somewhere you have to draw the line and get the two crazy kids together. I have one author who’s been stringing me along for over twenty books, and they’re barely holding hands. That’s frustration. Still, I keep buying her books, so she must be doing something right.

I’d like to see Cate succeed as a PI, too. But I have to admit to enjoying her struggles as she learns, so I hope she doesn’t advance too fast. Those foibles go a long way to increasing self-confidence. Mine, not hers! But seriously, I think it helps us to identify a little more, if she’s not quite perfect--to imagine ourselves in her shoes, which is what good fiction does.

And Dolled Up to Die is good fiction.

When Cate Kinkaid receives a frantic call about a triple homicide, she drives to the scene against her better judgment--aren't triple homicides more up the police department's alley?--only to find that the victims are not quite who she expects. Now she has a new rule to add to those she's learned in her short stint as an assistant private investigator: always find out if the victims actually have human DNA. Because these three do not.

But who would shoot this nice lady's dolls? What possible reason could the shooter have? And then there's the startling discovery of another victim, who definitely does have human DNA . . .

With tension that is matched only by humor, Dolled Up to Die is the exciting second book in Lorena McCourtney's The Cate Kinkaid Files. Mystery fans won't find a place to stop and take a breath in this fast-paced and intriguing tale.