I was reading something the other day--sorry, can’t really share what it was--but the context was talking about evil in the world, and the writer made a comment about how evil men murdered Jesus.

And it stopped me in my tracks. Was Jesus murdered?

Through the years there’s been a lot of finger-pointing regarding the death of Christ. Certain groups of anti-Semites--who, by the way, had little regard for Christ and his teachings--used the idea that the Jews killed Christ to justify their hatred and unwarranted persecution of the Jewish people. Hitler, for one, saw the crucifixion as payback for Jesus driving the moneychangers out of the temple. (Hitler missed the fact that Jesus was a Jew, and that He did not drive all the Jews out of the temple, only those who were taking advantage of the people through usury.) Whether Hitler was genuine in his warped belief, or whether it was convenient to his own political purposes, it’s anyone’s guess. But Hitler killed an awful lot of Christians in his day, too.

Others point out that the Jews of the time had no power to crucify anyone, and that Romans killed Jesus. What about Pilate washing his hands? And crucifixion was a Roman method of execution. (Odd that Hitler would kill Jews yet ally himself with Italians, huh?)

But the people demanded his death, remember? Asking to free Barabbas and to crucify Jesus…

However all that finger-pointing misses the mark.

If Jesus were murdered, then he’s a victim. But if he willingly gave his life, defeating death in the process, he’s a victor.

When we think about the crucifixion, it’s easy to develop a kind of sympathy for the crucified Jesus. We read how he was unjustly tried. Friends desert him. Witnesses lie as they accuse him. He’s beaten, whipped, spat upon. That jagged crown of thorns is forced onto his head. Made to carry a heavy cross through throngs of mockers. Stripped of his garments. Nailed to the wood and lifted up for all to see. Blood clotting from his wounds, the taunting calls of those around him. The struggle to breathe…

It’s easy to evoke an emotional response. We’re both sorrowful and indignant. But to focus solely on this pathetic Jesus is to present an incomplete message. Jesus wasn’t murdered. He gave his life, willingly. Because he loved us. To pay the penalty for our sin--and because of our sin. And not only that, he didn’t stay dead. He rose again, defeating the power of death and hell. And ascended to the right hand of God the Father. Where he prepares a place for us. 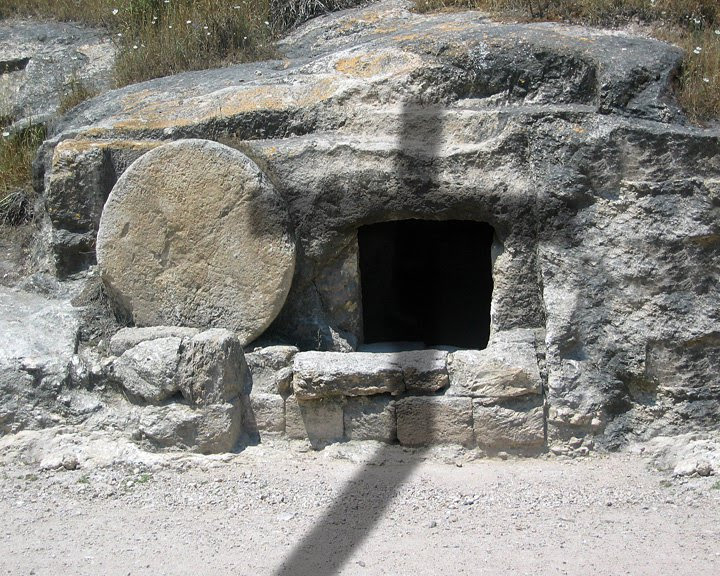 Whew! Not to be flippant, but those are some rather lofty accomplishments for a murder victim to achieve after his death.

A few years ago, I was contemplating the crucifixion, and I wrote a poem, well, lyrics, since there is a tune. The poem was a study in contrasts, comparing the darkness of the crucifixion to the Man who was the Light of the World.


Jesus stood at his trial there in Pilate’s dark hall.
In the judge of the earth was found no fault at all.
For he came to his own, salvation to bring,
But no man would have him as king.


Calvary, Calvary, hill of his death
Giver of life to my soul
It was for me, that he die on the tree
He was pierced to make me whole.

“Hail, King of the Jews,” they mockingly said,
Cruelly plucked out his beard, placed the thorns on his head.
Then these soldiers of dust, these men made of sod
Did spit into the bright face of God.

They stripped him and whipped him and mocked him with glee.
Feet that walked on the sea, were now nailed to a tree.
And that hands that healed others and did much good
Were pierced and were nailed to the wood.

Great thirst now from whom living waters did flow,
The true light of the world into darkness did go.
The eternal “I Am,” the Great Lord of Hosts
Cried out, and he gave up the ghost.

And that’s where it ended. And all that is true. But I’ve been thinking it’s an incomplete picture. So I added another verse:


He was laid in a tomb. A great stone sealed the door.
But he rose from the dead, and now lives evermore.
For no man took his life, the gift was his own.
For sin he did freely atone.

And the final chorus would be:


Victory, Victory, O’er sin and death.
Heaven’s gates fling open wide
Jesus by grace, prepared us a place
That with Him we might abide.

Question: Are you feeling like a victim or a victor today?

Barbara Early grew up buried in the snowy suburbs of Buffalo, NY, where she developed a love for all things sedentary: reading, writing, classic movies, and Scrabble. She holds a degree in Electrical Engineering, but her penchant for the creative caused her to run away screaming from the pocket-protector set. Barbara cooks up cozy mysteries with a healthy dose of comedy and sometimes a splash of romance. Her holiday novella, Gold, Frankincense, and Murder was released in e-book format from White Rose Publishing in December 2011. Barbara also writes as Beverly Allen, who has a cozy mystery series coming in 2014. You can learn more about her writing at www.barbaraearly.com