Great Storytelling Lessons from Dr Who

Well, this past weekend marked the big 50th anniversary celebration of Doctor Who, and a day of fish fingers and custard (you’ll get it if you’re  a Doctor Who fan) led me to consider the cause of the frenzy. What quality or qualities make for a series that elicits such fanaticism, even after fifty years? And can you bottle it?

Rich, evolving characters. One of the special treasures of Dr. Who is a title character who is constantly changing, although never out of character. We don’t necessarily meet a different person after each regeneration, but we see the same one from a different angle, a different point of view, and at a different stage in his life. 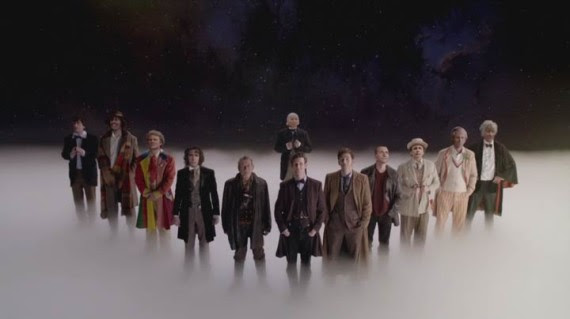 The changing companions also provide unique windows into the Doctor’s personality. Will we see the playful side? The romantic side? The serious side? But not only windows, since the Doctor’s trusted friends also have the propensity to change him. Rose, for example, turns him from the jaded, warring hero into something more balanced but more complex. The youthful Amelia brings out his playful side.

There’s a richness in characters that don’t remain completely static. Real people don’t. They work toward their dreams, make and lose friends, and are changed by love, hate, rebirth, death, and the whole extremes of human experiences. When fictional characters do this, too, they become more real to us, and more compelling.

Unanswered Questions. One of the biggest mistakes beginning novelists make is to try to tell the reader too much of a character’s backstory at the beginning. We don’t want to know someone’s life story if we don’t know them--like the stranger next to you on the airplane who won’t shut up. We only want to know more about a person’s history once we come to love them--or at least are intrigued by them. And then when clues are doled out as in a grand mystery, we can’t get enough.

But backstory isn’t the only opportunity to pique the reader with a question. Foreshadowing is another tool, peeks into the future (admittedly much easier when your character is a time traveler). What will happen? How will the decisions made today affect the future? But never too much information. Spoilers!

And don’t forget the cliffhangers, those “endings” that force you to read “just one more chapter” and make you plan your calendar around that next episode. Leaving the audience with those unanswered questions makes them think, wonder, imagine, theorize, and hope.

Crossing Genres. As the plot develops, there can be elements of mystery, history, adventure, and romance. And even noir, Westerns, and space operas. You never know what you’re going to end up with. There’s a freshness in breaking out of the formula, sometimes, and taking the plot--and the person enjoying it--on an unpredictable adventure. That’s why there can be a body in a romance and a romance in a mystery. And a touch of the other-worldly almost anywhere. There are times to conform to genre expectations and times to transcend them. 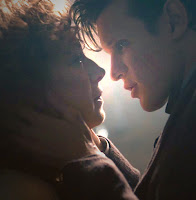 Boost of Emotion. One cannot be a master storyteller without the ability to make the audience laugh and cry. And the greatest masters can make you do both almost simultaneously. There’s a poignancy in humor, and a glimmer of hope in grief. And a twinkle in the more irascible of old men. The deeper emotional response can only be elicited when we are drawn into the characters. We can laugh at any old fool, but we will only cry for those we truly care about.

Ageless message. The interesting thing about science fiction, is that while the story proceeds, it’s often about something entirely different--an underlying message we might not even consciously be aware of, but if we’re paying attention, it will nag at us as we consider the deeper meanings. Isn’t that true with all great fiction? It engages thought.

If you’re super-attentive and a Dr Who fan, you might have noticed something in the outline of this post: Rich, evolving characters, Unanswered questions, Crossing genres, Boost of emotions, Ageless message. If you want a mnemonic, how about “Run U Clever Boy And...Remember” (Sorry for the chat-speak!)

Remember. The final mark--at least for this post--of great storytelling is that it is memorable. Like fairy tales read to us in bed and those shows and cartoons we grew up with, we don’t forget great stories. They linger in our minds and imaginations. And inhabit our dreams.

Question: What stories have ignited your dreams?

Barbara Early grew up buried in the snowy suburbs of Buffalo, NY, where she developed a love for all things sedentary: reading, writing, classic movies, and Scrabble. She holds a degree in Electrical Engineering, but her penchant for the creative caused her to run away screaming from the pocket-protector set. Barbara cooks up cozy mysteries with a healthy dose of comedy and sometimes a splash of romance. Her holiday novella, Gold, Frankincense, and Murder was released in e-book and audio format from White Rose Publishing. Barbara also writes as Beverly Allen, and her debut cozy mystery novel, Bloom and Doom, is coming in April 2014 from Berkley. You can learn more about her writing at www.barbaraearly.com