Mr Monk and the Last Goodbye

It was July, 2002, that the first episode aired. Monk was a made-for-cable show, back before they became trendy, about a former homicide investigator (now a consultant) suffering from severe obsessive-compulsive disorder. Adrian Monk burst onto the scene, no tie, shirt buttoned to the top, waving his hands in the air as he ferreted out tiny clues that everyone else missed. The premise, it seems, was that his OCD drew his attention to the smallest thing out of place, which often turned out to be just the piece needed to solve the case.

But this was no ordinary cop show. The brainchild of Andy Breckman, Monk drew writers from the comedy arena, several having written for Saturday Night Live, and starred Tony Shalhoub, whose antics as a supporting character on the sitcom Wings often (at least in my opinion) stole the show. Rounding out the cast were a crusty police captain, his Barney-Fife-like lieutenant, and a smart-mouthed nurse. The results could have been a hot mess. It could have been a mad combination of comedy, drama, and crime fiction pieced together like Frankenstein’s monster. Yet it worked somehow. And more than worked, capturing the hearts of critics and the audience, winning eight Emmy awards and airing 125 episodes in its eight-year run, remaining the most watched scripted cable show on television, until recently passed by The Walking Dead.

While the last episode aired in December 2009, Monk also inspired a bestselling series of 19 tie-in novels, fifteen writing by Lee Goldberg, and the last four penned by Hy Conrad, both of whom had written for the show. (Adrian Monk would have preferred 20.) With the January 2015 release of the last book, Hy Conrad informed readers that this would be the last of the Monk books, which inspired this goodbye tribute.

All this information and more can be obtained from Wikipedia and IMDB, but those sites can't explain the place Monk held in the hearts of the viewers who tuned in. Besides the beneficial effects of laughter and the mental challenge of a deliciously twisty mystery, I believe Monk also reminded viewers that if they didn't measure up to society's norms, and even if their contributions in life were undervalued, they themselves had merit. In fact, they could end up the hero.


Monk has also influenced several members of Inkwell as writers, and we’ve used the show as an example in countless conversations, both on the blog and behind the scenes. Personally, I doubt if I would have become a mystery writer without its influence.

I caught my first episode of Monk, several seasons in, when I was home recovering from surgery. USA was showing marathons of old seasons, and it didn’t take long to get hooked. Hooked? More like obsessed. Before long, I wasn’t just watching Monk, but re-watching Monk, binge-watching (before binge-watching became a thing), and analyzing every detail. I joined the message board, where we, sometimes heatedly, discussed all the minutiae of Monk. I read the tie-ins, went on to read a bunch of the fan fiction, some of which was truly dreadful, which made me wonder if I could do better. I gave it a try, also writing some truly dreadful fan fiction (which is NOT anywhere on the Internet).

In fact, it was Lee Goldberg who unwittingly launched my career when I read a blog entry he wrote, railing on fan fiction. The gist was basically, “If you think you’re so good, why don’t you try something original.” There might have been an expletive or two. And despite the fact that I really didn’t think I was all that great at the time (and I was right), the idea of trying something original caught and stuck.

But many of the earliest fiction lessons I learned from Monk. I studied how the writers twisted a mystery and wove in comedy while not pulling the viewer out of the story. More importantly, I learned it’s possible for a character to make you laugh and to make you care, deeply, at the same time.

It was a bittersweet moment when I saw a promotional photo from The Crime Scene showing last month’s releases, including my second published novel, in a stack anchored by the latest—and sadly the last—Monk book. 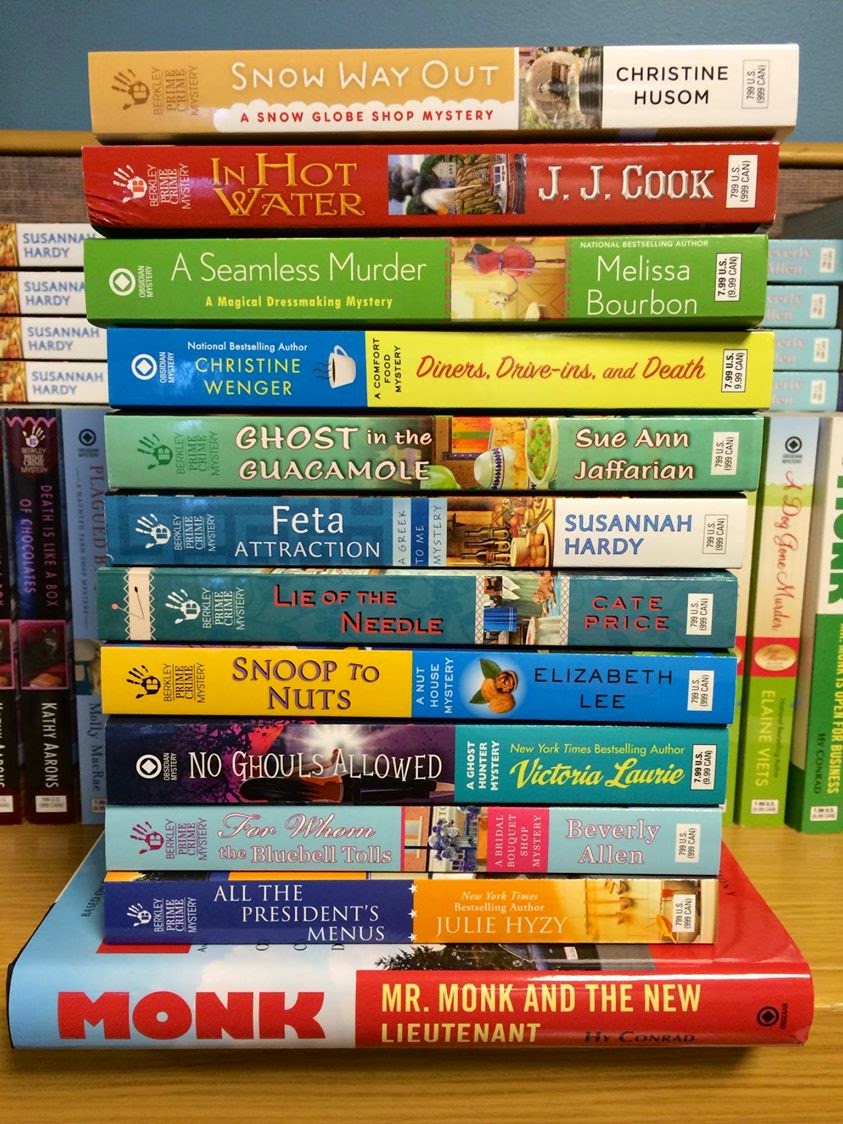 But what a foundation the writers have laid for us!

Questions for discussion: Did you watch Monk? Does a favorite Monk moment spring to mind? What did Monk mean to you? And writers, did you glean any fiction writing tips from Monk?

Barbara Early grew up buried in the snowy suburbs of Buffalo, NY, where she developed a love for all things sedentary: reading, writing, classic movies, and Scrabble. She holds a degree in Electrical Engineering, but her penchant for the creative caused her to run away screaming from the pocket-protector set. Barbara cooks up cozy mysteries with a healthy dose of comedy and sometimes a splash of romance. Her holiday novella, Gold, Frankincense, and Murder was released in e-book and audio format from White Rose Publishing. Barbara also writes the Bridal Bouquet Shop Mysteries as Beverly Allen, including Bloom and Doom, For Whom the Bluebell Tolls, and Floral Depravity from Berkley Prime Crime. You can learn more about her writing at www.barbaraearly.com
Posted by Barbara Early at February 02, 2015