For the Love of Books

Hello, my name is Barbara Early, and I'm a book-aholic.

As a writer, I guess I shouldn’t be all that happy about used book sales. After all, when a used book is sold, the author doesn’t see a penny of royalties. And that includes mine.

But it’s hard for me, as a reader, to stay away. Since the books I bought were fifty cents to a dollar (and half price on Saturday), the prices were at least a tenth of retail, so that book-buying dollar goes a lot farther.  Some books were pristine, some already well-read, others collectible. Occasionally, I’d find a special treasure. Or one that’s special to me.

The book sale that I attend every year is sponsored by the American Association of University Women in Buffalo, NY, so the profit that is made on the book goes into the hands of a charity, rather than a used book seller.

And perhaps it’s rationalization, but I’m more likely to take a chance on authors I’ve never read or heard of. Maybe I’ll get hooked, and that means I’ll buy more of their books later.

And the guilt melts away not long after I see table after table of books. From that point on, it’s a giddy rush. A treasure hunt. And soon I’m lobbing books into a foldable cart that, yes, I bought mainly for this sale—although I also now use it to cart my promotional materials to signing events.
And I make good use of the hand stamp, filling my cart, taking books out to my car, and starting all over again. So much so that they’ve noticed me.

And some of the treasures and oddities I encountered this year. 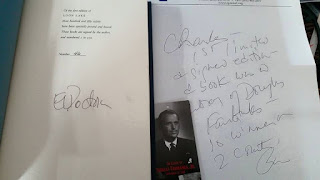 Now, if I had noticed this while at the sale, my conscience probably would have made me go back to tell them what I'd found. But that didn't happen. I picked up this book because, even on half-priced day, I've noticed there are "pretty" antique-looking books. And it's kind of fun to collect some at 50 cents a piece, then go home and see if there are any treasures among them.

This is a signed, limited and numbered first edition of Doctorow's Loon Lake, with the provenance that indicates it came from the library of actor Douglas Fairbanks. Kind of cool. 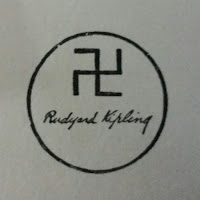 And this had me doing a double-take, and then hitting the Internet. Apparently Kipling often used a swastika symbol in his books, a Hindu symbol for good luck, before it was adopted by the Nazis. The two volumes of Kipling I picked up both pre-dated the rise of the Nazis, and both contained this symbol in the front matter of the books.

More about Kipling and the swastika here: http://www.kiplingsociety.co.uk/facts_swastik.htm

A new to me mystery series:

Mr. and Mrs. North. No, I didn't score the first edition in the picture, but I found several hardcover volumes of this husband and wife sleuthing team from a 1940s series also penned by a husband and wife team (the Lockridges). Apparently, the series spawned a radio program and a movie. Sadly, one volume I found had to be discarded because of excessive mold I didn't notice until I opened the cover. Looking forward to checking it out!

My half price haul also included a bunch of first editions (some lovely, some serviceable) of Daphne duMaurier, Victoria Holt, Earl Stanley Gardner, and Zane Grey among others. And a delightfully old edition of Dickens that took me about an hour to determine wasn't a rare volume worth hundreds.

And a little Austen...well, Sense and Sensibility and Sea Monsters, since I enjoy a little camp.

Ways to support your authors, even if you bought used? Write a review. Yeah, you got a deal on a book, but help the writer spread the news to paying customers. Tell your friends and book club members about that book you enjoyed. Is the book you bought part of a series? Splurge on retail for the next one.

And do you know of a great book sale? Invite your favorite author to attend.

Question: Do you buy used books? Do you have a favorite find?
Posted by Barbara Early at June 01, 2015