The Soundtrack of Our Lives

I recently had the joy of discovering John Williams’ music on Amazon Prime. I’d downloaded his “Greatest Hits” and listened to them on the way to church yesterday. Now, I’m not new to Williams’ music, and, most likely, neither are you. For he is the composer of many of Hollywood’s most iconic soundtracks. Star Wars. Superman. Jurassic Park. ET. Raiders of the Lost Ark. Jaws. Harry Potter. Seen any of those? Or watch the Olympics?

And in case you missed those, he’s earned 49 Academy Award nominations (second only to Walt Disney), so I’m sure there’s something familiar there. I’ll leave the list to the good folks at Wikipedia.

Honestly, I was looking for instrumental music that I could write to. Something inspiring. And this is some of the best instrumental music out there. Encompassing almost every mood imaginable, evoking place, sparking drama, his music swept away me into the conflict of Star Wars. The soaring melodies of the Superman theme made me feel as if I was no longer confined to the passenger seat of our Civic, but as if I could leave the ground and fly. (Do not attempt this at home.) When Indiana Jones started, I found myself wandering  in some exotic bazaar. Many of the themes made me want to see the movies all over again, or interested me in films I’ve yet to see.


And I got to thinking of what a tremendous honor it would be to write a story that Williams composed a score for. What would it sound like? Could I ever develop a theme noble enough or a story that resonated enough to inspire such a lyrical tribute? (The answer is probably no. Never. Not on your life. Sigh.) 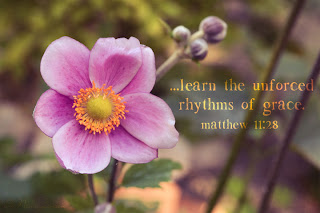 And then I got to wondering what the soundtrack of my own life would sound like. As a Christian, I would hope that it would contain the rhythms of grace as a central motif, but I must admit, I’d be afraid to listen to the score of my own life. There are probably many times when that central theme has been overshadowed by discordant dreams and ambitions, the more enticing themes of entertainment, and the steady, unrelenting beat of selfishness. While the Composer worked to create a masterpiece in my life, how often have I played back an uncertain tune, a blaring note, or forged ahead in inferior compositions of my own device, ending up in an atonal mess that leaves others grasping their ears.

O, Lord, today let me follow Your tempo and direction.

Question: What is the soundtrack of your life?
Posted by Barbara Early at August 03, 2015