Things I Learned While Editing

As I'm writing this, it's three something in the morning, and I'm up because A. I'm prone to bouts of hypochondria anyway, B. when I did wake up, I realized I hadn't written a blog post for today, and C., when I'm done here I need to jump into my copyedits for DEATH OF A TOY SOLDIER, due tomorrow. (I've finished reviewing them, but I do like to read through the whole book again at this point). So rather than being creative and pithy, I thought I'd share a little about the process and how it's going.

Let me start by saying that I love a good edit.

I ran into a writer at some book event--I don't remember too much about it except her comment, which went something like, "You mean editors change your book? I don't think I could do that." She was aghast. I was a little aghast at her aghastness. (Aghastitude? Aghastiscence?) I think it goes back to a the old joke: How many writers does it take to change a light bulb? I don't know. Writers don't change anything.

Honey, if you want to be a professional writer, you have to learn to love a good edit.

Words don't always fall from my lips like spun gold. At times I make mistakes. I have errors in research. Some sentences come out convoluted and clunky, or could be easily misread. One time I had a van that turned into a truck, which then magically appeared in a parking lot, even though someone else had driven it away a scene earlier. Things like this happen in a manuscript that you write over the period of months. You mis-remember the details. But the reader, who reads that same book in the period of a few days--or sometimes at one sitting--will catch every mistake and contradiction.

So I don't look at an edit as someone trying to <gasp> change my book. Rather I have the opportunity for several trained and experienced professionals to scrutinize my work and make it a better experience for the reader--which only makes me look good. What's not to love?

And I always learn something in the process:

Did you know that Tim Hortons doesn't have an apostrophe? It has something to do with laws in Quebec about signage in English, and the apostrophe is an English construct. Fascinating. I had to look it up.

The original spelling of tiddlywink is tiddledywink. And that is apparently still the preferred spelling in Webster's, which most publishers use.

The en-dash, longer than a hyphen but shorter than the em-dash, does have a place in my writing. I'd never had the occasion to use one before. But apparently it is the correct choice in the phrase "Sherlock Holmes–style magnifying lens" because of the compound modifier containing a proper noun. Which I just think is pretty nifty.

Still, sad to say, some mistakes will make their way into even well-edited books.  I like to think of the process as something like running grain through outstretched hands, and editors try to pull out the pieces that don't belong, like removing stems, empty shells or small pebbles out of a pot of beans before you cook them. The more skilled hands that filter through a manuscript, and the more passes that are made, the more mistakes get pulled out. Ideally. Although sometimes fixing a problem might create another, or a glaring problem in one spot obscures another.

Those, my friend, are what keep us up at night.

Question: For writers, what have you learned from a good edit? For readers, what's the most interesting thing you've caught that got past editors into a book? (No names please!) 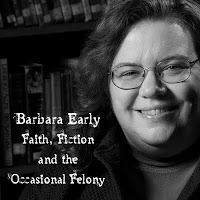 Barbara Early grew up buried in the snowy suburbs of Buffalo, NY, where she developed a love for all things sedentary: reading, writing, classic movies, and Scrabble. Barbara cooks up cozy mysteries with a healthy dose of comedy and sometimes a splash of romance. Writing as Beverly Allen, she penned the Bridal Bouquet Shop Mysteries, including Bloom and Doom, For Whom the Bluebell Tolls, and Floral Depravity from Berkley Prime Crime. You can learn more about her writing at www.barbaraearly.com.   **And DEATH OF A TOY SOLDIER, the first Vintage Toyshop Mystery, is now available for pre-order! **
Posted by Barbara Early at April 04, 2016