Night at the Museum: Secret of the Tomb


As mom to three boys, my movie-going experiences are often limited to offerings Mom can sit through that are still boy-friendly. We did two family movies over the holidays: Big Hero 6 (a kind of Wall-E meets anime mash up) and the third (and last) installment in the Night at the Museum franchise.

My boys loved the first Night at the Museum movie—so much so we bought the DVD and they still watch it. (Middle son even went through a phase where he watched it regularly.) Down-and-out Larry Daley (Ben Stiller) takes a job as night guard at New York’s Museum of Natural History, only to discover that the displays come to life when the sun goes down. But can lovable loser Larry rally the sundry wild animals, famous historical figures, and even a talking rock when villains threaten to end their nightly adventures? The cast members are well suited to their roles, and the film has just enough fantasy and silliness to appeal to children while still having enough sophistication for adults to enjoy the jokes. (And fortunately, the bathroom humor was mild enough even for Mom’s sensibilities.)

As a former resident of the D.C. area (whose husband once lost our oldest son in the Smithsonian’s Museum of Natural History—yikes!), I looked forward the sequel (Night at the Museum: Battle of the Smithsonian), only to find it immensely disappointing. The whole thing felt flat. We watched it once, and never bothered getting a copy on DVD. So, I approached Night at the Museum: Secret of the Tomb with some trepidation.

In Secret of the Tomb, something is wrong magic that makes the museum displays come to life. Alas, the solution lies with a 4,000-year-old mummy in London. How can Larry arrange transatlantic travel for the gang of artifacts?

Once in London, Larry and friends use the magic to bring the exhibits in the British Museum to life. Fans of British drama will appreciate Dan Steven’s (Downton’s Matthew Crawley) portrayal of Lancelot. Of course, the joke about newly awakened Lancelot crashing a production of Camelot went over the boys’ heads, but Mom enjoyed it (especially the Hugh Jackman cameo). And the fight inside the Escher drawing is appropriately weird.


Verdict? Much better than the second movie, and probably worth it just to see Robin William’s final on-screen role. (His last movie credit, to release later this year, is a voice-only part.) 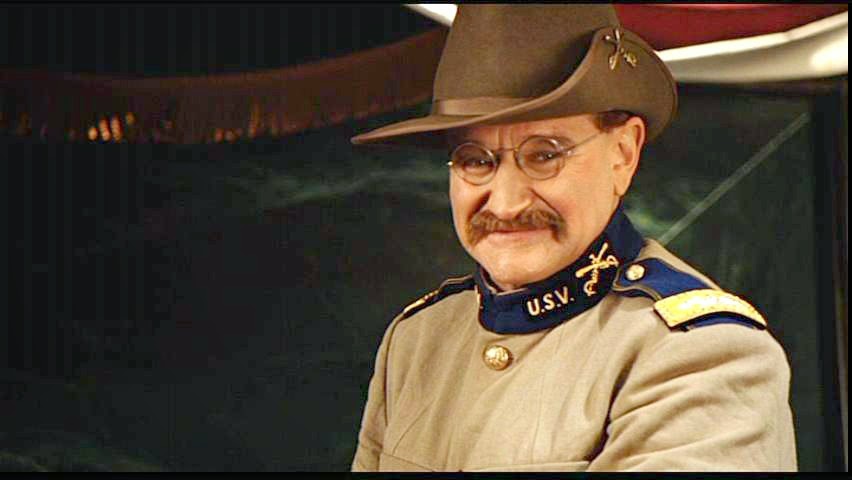 The late, 93-year-old Mickey Rooney--also in his second-to-last-role--made a cameo as Gus (one of the former night guards/bad guys in the first movie) from a wheelchair. As a bonus, I’ve always had a soft spot for Dick Van Dyke, so I was happy to see him still spryly dancing in his short appearance as Cecil.

Sequels are seldom as good as the original, but this one recaptures some of the magic (yes, pun intended).
Posted by C.J. Chase at January 16, 2015