THE HEART OF A KING by Jill Eileen Smith, Reviewed by Nicole Cook #INTERVIEW 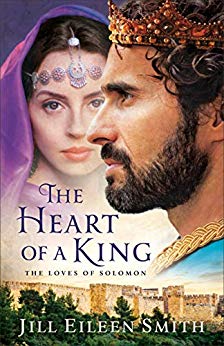 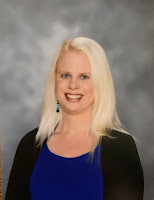 Nicole: I am delighted to have author Jill Eileen Smith join us today at Inkwell Inspirations to discuss her latest biblical fiction novel, The Heart of a King, which was chosen as the July book club selection for the Avid Readers of Christian Fiction Facebook Group. Jill Eileen Smith recently led a live Facebook chat in the Avid Readers Group to discuss her book with the members of the group.

Jill, thank you so much for joining us today! 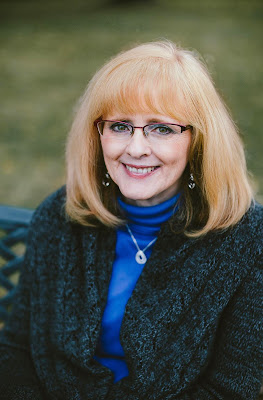 Jill: Thank you for inviting me, Nicole!

Jill: Not really. Each woman in Scripture is unique in her own way and I enjoy getting to know their stories—as far as Scripture will allow. I also enjoy imagining the how and why things happened the way they did. I may be wrong in my imaginings, but each woman teaches me something along the way. As for books of the Bible—again, not really. I don’t have a favorite verse either because it keeps changing depending on my life’s circumstances.
Nicole: The Heart of a King, is a fascinating look into the life of King Solomon, his incredible wisdom granted by God, his numerous foreign wives and many indulgences, which ultimately led to his downfall. What message or inspiration do you hope that people will get from reading The Heart of a King?

Jill: First of all, thank you for reading it. I’m glad you enjoyed the book!

I hope people will learn what I’m still learning and that is this: We love God because He first loved us. But once we begin to love Him, we must guard our hearts lest we end up loving the blessings or gifts He grants to us more than we do Him. In other words, we need to love the Giver more than the gift. Solomon didn’t appear to do that and it cost him dearly.

Nicole: How do you decide which individuals from the Bible you are going to write about? Is it a personal decision or does your publisher play a role in choosing the topics of your upcoming novels?

Jill: It’s a combination of both. I might propose an idea and they’ll say, “let’s do it”. At other times, my ideas are met with hesitance or they don’t see a way the book will fit my audience so they turn it down. But sometimes, we revisit an idea and it gets accepted. For instance, I proposed Joseph’s story to them some time ago, but it wasn’t the right time. After The Heart of a King was in process, we proposed it again and the time was right. With that contract, however, they want two more novels about biblical woman who are “TBD” – to be determined. When we get to that point, we might have some back and forth discussion if what I’d like to do doesn’t sound good to the committee. It’s complicated because the publisher has to believe that the book will sell well before they can agree to it. All the work that goes into just one book isn’t cost effective if my readers would not find it worth reading.
Nicole: The Heart of a King takes readers back to ancient Israel and brings Scripture to life in a powerful way that allows readers to better understand and experience the words of God. What type of research do you complete prior to writing your biblical novels to make them as authentic and realistic as possible?

Jill: Research starts with Scripture. If I know the story, I might read a commentary or two before I reread the scriptural section, but to know the characters and the setting and the people and what was happening at the time, Scripture is an absolute must for research. I’ve been known to study genealogies, though I know a lot of us like to skip those unusual names! But they can be key to figuring out parts of the story—depending on the story.

I also study life and times books and sometimes I will study the secular history that is happening at the same time—IF that history is known to us. Often it is not. But we can glean from archeology, studying pagan belief systems that the Israelites would have come up against or had influencing them. Maps and geography, what kinds of furniture, tools, food, drink, etc., are all important to know. I might try out a recipe as I did for my next book, just to see what their food tasted like. Much of my research in cumulative, in that, I’ve studied so much of it in the past, that I don’t always have to put as much time into research, depending on the character. For instance, I knew King David’s life pretty well before I wrote The Heart of a King, so I knew the background of Solomon’s life. My main research about the women in the book came from studying Solomon’s writings.

Nicole: I love being a member of the Avid Readers of Christian Fiction Facebook group, organizing the book club, and participating in so many wonderful discussions within the group.

As a reader, I get to share my love of Christian fiction with the other members in the group, and I have discovered so many new-to-me authors who have become must-read authors.

From an author’s perspective, what do you like best about participating in the Avid Readers of Christian Fiction Facebook Group, and what has been your favorite part of having The Heart of a King as the book club selection this month?

Jill: I must admit I am new to the group, so I’m still getting to know how things work. My assistant, Amanda Geaney introduced me to you all, and I’m grateful for the chance to interact with new readers and to see how excited they are to read Christian authors whose work they love. Word of mouth recommendations coming from people who love God and love to read books that honor Him is a great way to find good stories.

I was truly honored to have The Heart of a King chosen for the book club selection for July 2019. The interview was fun, but I wish I could have seen the readers face to face. I don’t know of a platform that offers that with a group. But I still enjoyed meeting readers and thank you, Nicole for facilitating the chat and all of it! I hope to become more involved once this year of too many deadlines is over!
Nicole: Can you share any information about your 2020 release, Star of Persia: Esther’s Story? Esther’s story is one of my favorites from the Bible, so I can’t wait to read it!

Jill: Star of Persia is a little different than most books on Esther that I’ve read in the past. I attempted to mix the historical writings of Herodotus and others with regard to Xerxes’ character and the character of his wives with the Scriptural story. It was tough to do because Esther and Vashti are not mentioned outside of Scripture. Xerxes is said to have married Amestris and some scholars speculate as to whether Vashti or Esther could have been Amestris. But the character of Amestris does not fit the character of either Vashti or Esther as they are given in the Bible, so I added her in as another wife. Kings did have multiple wives, so it wasn’t a stretch to think that possible. I truly hope the story gives readers a unique perspective of Esther’s story, but doesn’t detract in any way from the truth of the Bible.

Nicole: Jill, thank you again for joining us today! This has been a pleasure to chat with you!

Jill: Again, thank you for having me. It has been my pleasure as well.

NICOLE'S REVIEW:
Award-winning author Jill Eileen Smith’s latest biblical fiction novel, The Heart of a King, is a fascinating look into the life of King Solomon, his incredible wisdom granted by God, his numerous foreign wives and many indulgences, which ultimately led to his downfall. Jill Eileen Smith is a master at bringing Scripture to life and realistically filling in the details which encourages readers to dig deeper into the Bible and discover more about the word of God.

Portions of this book were previously published as e-books by this author (The Desert Princess, The Shepherdess, Daughter of the Nile, and The Queen of Sheba), so readers will thoroughly enjoy how all of these stories come together to tell a more complete narrative of King Solomon’s life. This novel focuses on four important loves in King Solomon’s life, while also exploring the relationships Solomon had with his parents, King David and Bathsheba, one of his half-brothers, Adonijah, and most importantly, his relationship with God. Readers will learn about his first wife (and mother of his heir) Naamah, Abishag the shepherdess, Siti the daughter of an Egyptian pharaoh, and Nicaula the queen of Sheba.

King Solomon was a highly charming, wise ruler of Israel, whose seven hundred wives, hundreds of concubines and extravagant life of excess was in contrast to the teachings and obedience that God asked of him. Jill Eileen Smith’s eloquent writing style thoroughly captivates readers and keeps them invested in the novel until the very last page. The Heart of a King is highly recommended for readers of biblical and historical fiction. Readers will be eagerly awaiting Jill Eileen Smith’s March 2020 release, Star of Persia: Esther’s Story.

*I received a complimentary copy of this book from Revell Publishing and was not required to write a positive review. All opinions expressed are mine.

Back Cover Blurb:
King Solomon was wealthy and wise beyond measure. He could--and did--have anything he wanted, including many women from many lands. But for all his wisdom, did he or the women in his life ever find what they searched for all of their lives?

In this engrossing novel, you'll find yourself whisked away to ancient Israel, where you'll meet Solomon and four of the women he loved: Naamah the desert princess, Abishag the shepherdess, Siti the daughter of a pharaoh, and Nicaula the queen of Sheba. As you experience the world of Solomon through his eyes and the eyes of these women, you'll ask yourself the ultimate question: Did Solomon's wisdom ultimately benefit him and those he loved . . . or did it betray them?

Author Bio:
Jill Eileen Smith is the bestselling and award-winning author of the biblical fiction series The Wives of King David, Wives of the Patriarchs, and Daughters of the Promised Land, as well as the nonfiction book When Life Doesn't Match Your Dreams. Her research into the lives of biblical women has taken her from the Bible to Israel, and she particularly enjoys learning how women lived in Old Testament times. Jill lives with her family in southeast Michigan. Learn more at www.jilleileensmith.com.

The Avid Readers of Christian Fiction Facebook Group is a wonderful discussion group for book enthusiasts to talk about what Christian fiction books they are reading. Participation in the group is the perfect way to discover many new Christian fiction authors and books. Members can also choose to participate in the book club within the group. The group is comprised of numerous Christian fiction authors and readers and is very well moderated. Any readers or authors interested in joining the group can click on the following link and answer a few questions to be added. The questions are easy and are meant to keep out spammers. https://www.facebook.com/groups/AvidChristFicReaders/ 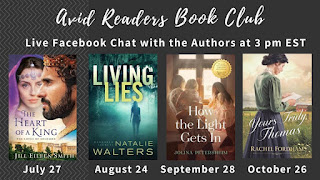 The August book club selection for the Avid Readers of Christian Fiction Facebook Group is Living Lies by Natalie Walters.