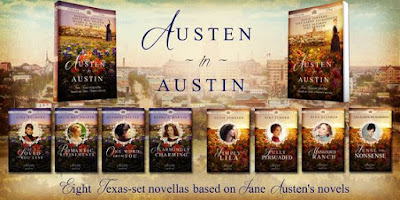 Back in 2009, when I was first learning the writing industry and seriously seeking publication, God joined me with a group of ladies to help me along my quest. I was invited to join Inkwell Inspirations, a new writers blog comprised mostly of writers who had won writing contests (I had just won the Touched by Love contest) but were still unpublished. Over the next years, we would become not only blogmates, but also close friends, prayer partners, and in many ways a writing team. So it's not surprising that we decided to band together on a writing project, and Austen in Austin was born.
It was a labor of love, as the published ladies sought to help the unpublished ladies achieve that esteemed goal, although at this point each of the Inkies has several published works to their names. Several more years passed before the dream became a published reality, but I'm happy to share it with you today.

As you can see, these eight fun Texas-set novellas are based on Jane Austen's novels. The Ladies of Inkwell Inspirations had such a great time working together inventing these stories with their overlapping settings and characters and their Austenian plot lines, and I just know that you'll enjoy them too! They're written by some great established names in Christian fiction like Lisa Richardson, Gina Welborn, and yours truly, as well as some Inky authors who you might not have read yet, but will soon become favorites. I highly recommend reading the stories in order for the full experience of the overlapping characters and settings. The ebooks are a great deal at only $3.99 each for a volume of four delightful stories!

Volume 1 includes:
If I Loved You Less by Gina Welborn, based on Emma
A prideful matchmaker examines her own heart when her protégé falls for the wrong suitor.

Romantic Refinements by Anita Mae Draper, based on Sense and Sensibility
A misguided academy graduate spends the summer falling in love . . . twice.

One Word from You by Susanne Dietze, based on Pride and Prejudice
A down-on-her-luck journalist finds the story of her dreams, but her prejudice may cost her true love . . . and her career.

Alarmingly Charming by Debra E. Marvin, based on Northanger Abbey
A timid gothic dime-novel enthusiast tries to solve the mystery of a haunted cemetery and, even more shocking, why two equally charming suitors compete for her attentions.

Order Volume 1 in print or ebook

Volume 2 includes:
Simply Lila by Suzie Johnson, based on Lady Susan
Yearning to find a real-life hero, a wallflower must learn to live outside the pages of an Austen novel.

Fully Persuaded by Niki Turner, based on Persuasion
A brokenhearted artist struggles with the shame of her family s bankruptcy and the return of her first love whose proposal she d spurned because he was poor.

Mansford Ranch by Dina L. Sleiman, based on Mansfield Park
An aspiring novelist with a keen eye for character must determine who is worthy of playing her own leading man.

Sense and Nonsense by Lisa Karon Richardson, based on Sense and Sensibility
A would-be missionary is determined to make it to Ceylon, but when her funds disappear, she has to accept help from the man she most wants to avoid.

Here's what people are saying about Austen in Austin:

"They had me at the title! What's not to love about a collection of novellas patterned after Jane Austen's classic novels and set in the historic capital city of Austin, Texas? The result is as delightful as the premise." ~ Mocha with Linda

"Austen in Austin is one of the most well executed novellas I’ve read...All of the novellas are interrelated, so where one author leaves off another picks up months or years later, with a new lead character and a familiar cast. I enjoyed the continuity as well as the familiarity which this team of authors developed. If I Loved You Less probably held the closest to Austen’s works. In contrast, Alarmingly Charming struck me as an improvement on the original (because truthfully, I did not enjoy reading Northanger Abbey). All in all, these stories are irresistibly sweet romances with subtle elements of faith." ~ Shelf-Esteem

And in case you're wondering, yes, you can purchase the novellas individually in ebook format, but at $2.99 each, it's a much better deal to buy a set of four for $3.99.

Be sure to check out these fun novellas and share them with your friends!
Posted by Dina Sleiman at October 14, 2016