Anyone who has hung around the Inkwell for long, knows that I have an abiding passion for a man not my husband (gasp!) Luckily the man is fictional. He is in fact, the inimitable Sherlock Holmes. I’m quite certain that the good Mr. Doyle had no idea what he was doing when he created his sleuth, I’m just glad he did it anyway.

There aren’t nearly enough “real” Sherlock stories and so, over time, hungry fans have set up such a ruckus that new authors have created a smorgasbord of pastiches. One of the very best that I’ve seen is a reimagining of Sherlock as a modern day consulting detective. The episodes to date have been updates of the original stories. Some of them looser interpretations than others. 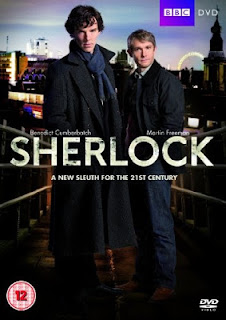 I was skeptical to begin, but the show hooked me within a few minutes. Our John Watson, played by Martin Freeman, is British army doctor returning from Afghanistan, which doesn’t sound nearly as outlandish as it would have done a dozen years ago. In fact it’s made me wonder if that was the seed idea for someone when it came to the idea of the whole series. Watson is a great blend in the series, he’s not portrayed as a dimwitted acolyte, but a smart, devoted friend, who doesn’t mind handing back some of what Sherlock dishes out.

Sherlock is played by Benedict Cumberbatch, who manages to balance his character’s insufferableness with moments of humor and even quietly repressed warmth. He might not show his friends that he cares by saying a kind word, but touch Mrs. Hudson and you might find yourself suffering a terrible “fall.”

Created by Steven Moffat and Mark Gatiss (who also plays Mycroft Holmes) this show is smart and witty. Mr. Moffat is also the brilliant evil genius behind the twists and turns of the last several seasons of Dr. Who. (Why Rose?! How could you do that to her and the Dr!! You’re tearing my heart out!) Sorry. Back to Sherlock, the casting as you may have gathered from the above is spot on, and the only problem I have with it is that I can’t get any more! 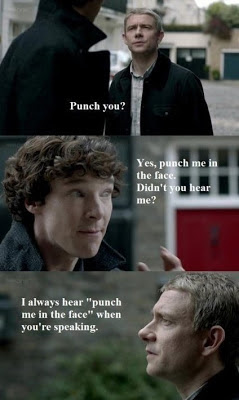 Only six episodes have been released to date. A new set of three is in production, but for Sherlock fans it has been an interminable and unkind wait. The last episode was “The Reichenbach Fall.” And you know what that means, right?! It means speculation, darn it! How can it be resolved? I have my ideas, but it just can’t be right, Sherlock is smarter than me, so what did he come up with? 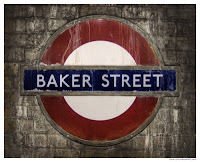 The drought should end before the end of the year. In the meantime, at least there’s Netflix which has the first two seasons available. They’re also available as DVDs.  One word of caution, not all the episodes are kid friendly-particularly A Scandal in Belgravia, which introduces The Woman.

Have you seen Sherlock? What did you think? Does anyone want to offer their theory about Reichenbach? 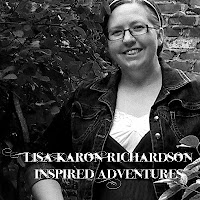 Influenced by books like The Secret Garden and The Little Princess, LISA KARON RICHARDSON’S early stories were heavy on boarding schools and creepy houses. Now, even though she’s (mostly) grown-up she still loves a healthy dash of adventure in any story she creates, even her real-life story. She’s been a missionary to the Seychelles and Gabon and now that she and her husband are back in America, they are tackling a brand new adventure, starting a daughter-work church in a new city. Her most recent novel, Diamond in the Rough, (May, 2013) was co-authored with Jennifer AlLee, and is the first in the Charm and Deceit, series from Whitaker House. Book two, Vanishing Act, is coming in September as is a novella from Barbour entitled “Midnight Clear,” part of the Mistletoe Memories collection.