Welcome Guest Blogger Roseanna White. Roseanna is one of our favorite authors here at Inkwell, so make sure to note that she has a free novella available right now! Links are available at the bottom of the post. 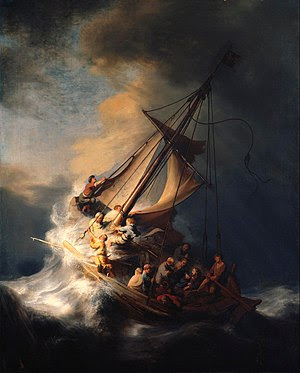 
37 And a great windstorm arose, and the waves beat into the boat,
so that it was already filling.  38 But He was in the stern,
asleep on a pillow. And they awoke Him and said to Him,
“Teacher, do You not care that we are perishing?”
39 Then He arose and rebuked the wind, and said to the sea,
“Peace, be still!” And the wind ceased and there was a great calm.
40 But He said to them, “Why are you so fearful? How is it that you
have no faith?”  41 And they feared exceedingly, and said
to one another, “Who can this be, that even the wind
and the sea obey Him!”

Now, I've read those words approximately a hundred times, and I'm guessing everyone else has too. And I've always gotten out of it what the disciples did--wow, did you see that? The wind and waves obey Him! This Man rules the weather!!

Which is awesome. Truly, amazingly awesome.

I've also been struck before by His rebuke of the disciples--they'd just witnessed an amazing miracle, when He fed the 5,000. But they still didn't quite get it . . . and Jesus calls them on that, on their lack of faith.

But as I was reading this section this time, something new hit me.

He didn't have to do any of that. Ever pause to consider that? It wasn't His time to die. He still had a whole lot to do. There was no possible way that the storm was going to hurt that little boat with its most precious cargo, and Jesus surely knew it. He had no fear, and it wasn't just because He knew He could calm the storm--it was because He knew it wasn't a threat.

And, maybe, because He knows they wouldn't have heard him until that fear was gone.

But He chose the one that calmed his friends. That soothed their fears. And then, then he reminded them to have faith.

Because You calm the storm. And then You remind me that it was in Your hand all along.

Roseanna M. White pens her novels under the Betsy Ross flag hanging above her desk, with her Jane Austen action figure watching over her. When she isn’t writing fiction, she’s editing it for WhiteFire Publishing or reviewing it for the Christian Review of Books, both of which she co-founded with her husband.

The first novel in her Culper Ring Series from Harvest House, Ring of Secrets, released in March, and the sequel, Whispers from the Shadows, is coming in August. In the meantime, you can download a novella of the intervening years for free! Fairchild's Lady is set on the eve of revolution in France, following a British spy as he attempts to rescue two French ladies from the impending tide of terror. You can download it at Amazon, CBD, B&N, iTunes, and GooglePlay