Back at the end of January, I posted about Mazo de la Roche, the writer of the Jalna series, and how I had recently discovered that she had spent vacations close to where my genealogy research had taken me in York County, Ontario. I included mention of her autobiography, Ringing the Changes, and forewarned about a post where I wanted to relay her first steps into publishing. This post will be of interest to writers who I'm sure can relate to Mazo's struggles, and also to readers who like to know details of how books are created. 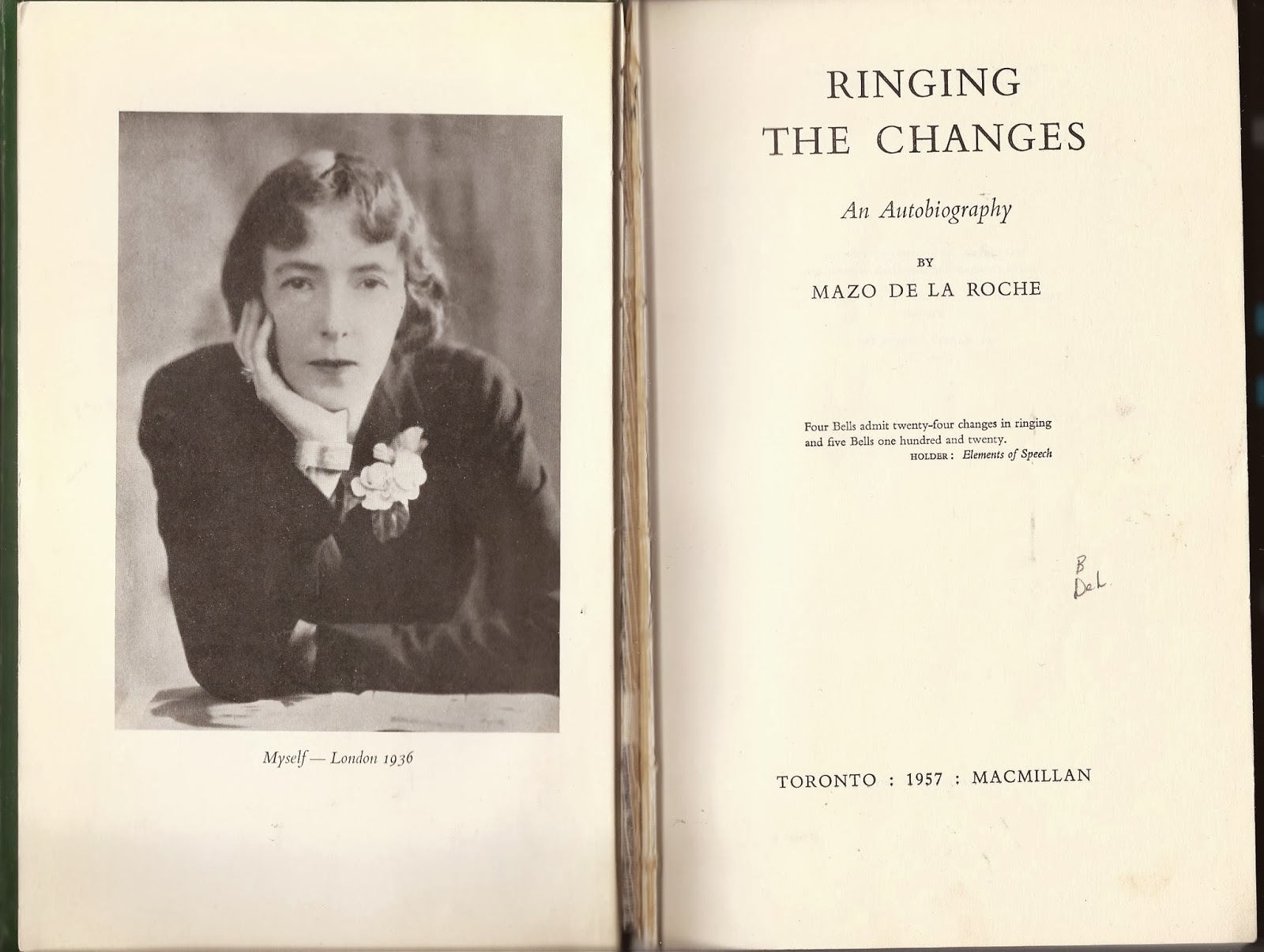 Mazo was twelve years old when she first became inspired to write. "I had the idea that I must work myself up into a state of excitement before I could write of what was in my mind." So she'd lie rigid on her sofa and imagine the scene. Then she'd get up and write it down, not type it although she had access to a typewriter, but write it long-hand. Back to the sofa to imagine the next part, and so on until she had her story finished. She caught herself in the mirror once, flushed cheeks and eyes glittering from the excitement of her story, and then in later years admitted how ridiculous it sounded.

When her first story was done, she sent it to Munsey's Magazine without return postage - something that came later with experience. After weeks of waiting for the postman, she received a small envelope from the magazine with an acceptance letter and the promise of a $50 payment. Although she doesn't say which story this was, my research shows that her first published story was The Thief of St. Loo published in Munsey's Magazine in November 1902. (Click the link to read it.)

After selling several more short stories, she submitted what she considered her best effort...and then waited and waited... It didn't help that on a return trip to the post office the girl at the wicket said someone had found a stamp on the floor just after Mazo had left. She had put so much hope in this story, that depression hit hard and it was followed with a physical decline in her health. She doesn't really give it a name except to refer to her nerves and that she was ill for months before she received an acceptance letter and accompanying check for the story she feared was lost in the postal system. By that time, she was too weak to walk and was sure she was dying and would never write again.

It was three long years before she could bring herself to write a creative paragraph, and so it was slow going, a little each day. One day while on a vacation she had an incident with her travelling stove which was heated by methylated spirits. She wrote, "A blaze shot ceilingward. I screamed, but only the spiders heard me...When I had somehow quenched the flames, I peered into the looking-glass. My eyebrows and the fringe of hair on my forehead were gone!"

Several days later with her manuscript completed, she joined her family at a Lake Simcoe cottage in York County and although her family were happy to see Mazo looking so healthy, her mother's first words were, "But darling, where are your eyebrows?"

This story was also quickly accepted and published in Smart Set magazine. Mazo once wrote, "I always was surprised when my stories were accepted. I was equally surprised when they were not."

After the war ended, Mazo said she sold second rights to ten of her short stories which had previously been published in American magazines. An editor at the Canadian Home Journal bought them for $1000. To put it into perspective, in 1920, a loaf of bread costs 12 cents, a pound of bacon 42 cents, and a pound of coffee was 47 cents, with a few cents higher costs in New York and Washington.

However, her happiness was short-lived when she received a letter from the Montreal Authors' Association questioning the validity of entering the same play in two contests, and requesting their prize money back. Mazo didn't return the money because she'd already spent it. The upshot of this incident was that she received an apology from the Canadian Authors' Association.

Mazo's story of her first meeting with a publisher reached out to me as a kindred spirit. Wanting to look her best, she dressed with great care and then put on an old sweater before checking to ensure the furnace had enough coal to last until her return. She didn't realize until she was in the publisher's office and went to take her coat off that she'd forgotten to remove her shabby sweater, holes and all. The room was too hot to continue wearing her coat, but she had to endure until her host stepped out for a moment. Moving quickly, she removed her coat and sweater before tossing the sweater out an open window. However, she was left with the expectation that her sweater would suddenly re-appear at any moment.

She thought her second novel would be better since she had moved to a beautiful setting in Nova Scotia and proceeded to fill her novel with all sorts of interesting details. Upon reading it, though, she thought it sounded "guidebookish", but that it would make a great film. Her publisher thought otherwise. He said he would publish it, but he really didn't think it was worthy. The valuable lesson learned here is to write what you know.

Mazo's first three novels brought acclaim abroad, but mixed reactions - mostly negative - from Canadian reviewers. She wrote, "One Toronto critic in particular was so violent that his review was almost a classic in abuse." She went on to say, "The reviews...meant a great deal to me. At that time reviews had the power to depress me or to give me confidence. They helped to bring out the mettle in me -- to give  me heart of grace in the writing of my next novel."

The reviews changed in 1927 when Jalna won the $10,000 prize from the American magazine, Atlantic Monthly.  The Canadian Forum said, "Jalna opened the eyes of Canadians to the fact that Mazo de la Roche possesses distinctive qualities as a writer... de la Roche was writing just as well a year ago as now, but only now are her countrymen commencing to realize that she has style..."

Suddenly, Mazo was popular, but speaking engagements and parties were demanding on her nerves. Instead of working on Whiteoaks, she was struck by migraines which her doctor blamed on overstrain. He prescribed a series of electric treatments, but they only seemed to make her headaches worse. One day a well-meaning nurse advised her to quit the treatment, which Mazo did.

With only a couple chapters of Whiteoaks written, it was time to work. With her paper, pencil, penknife for sharpening her pencil, and dictionary ready, she sat down prepared to write. She says, "Only a writer who has suffered an attack of nerves, such as I had passed through, can quite understand the effort of beginning, the tremendous eagerness to put down the first words, the fear of defeat, of breakdown. I knew what I wanted to write. The words were at my hand. But could I write them? One line I wrote. Then a strange rigidity struck my nerves. The pencil would not move. I could not budge it. Helpless I stared at the paper. One line! One line of ten words! And I could not - not to save my life - write another."

It would be too sad if I ended this post here because that one line of writing energized Mazo. It may have been just one line, but it was one line and it encouraged her to try again the next day. From one one, to one paragraph, to a full page by the end of the week and she was on her way once again...

Can you imagine what would have happened if Mazo hadn't attempted one or more lines the next day? You don't need to be a writer to try one more line. Mazo inspires me because of what she accomplished despite her problems.

What about you? Is it time for you to try one more line, one day at a time?
Is there something in this post that inspires you? 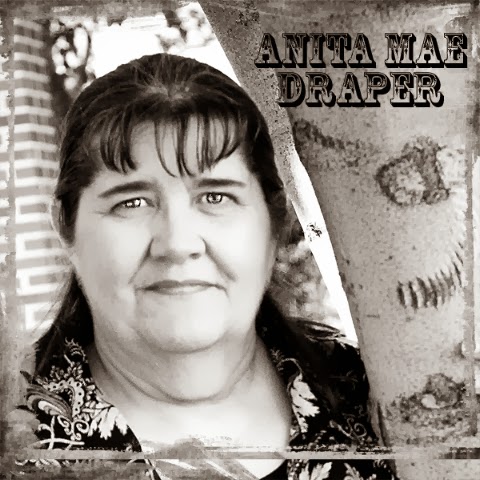