If you saw my last post, Antique Cookbooks Part 1 1890 - 1906, about old cookbooks I bought at a museum auction, you'll find this is a continuation although the first cookbook overlaps by 5 years.

First up is a frail pamphlet made of newsprint that's missing its cover and copyright page, although page one states the title as Aunt Kate's Cakes and Candies Book, and at the very bottom of the last page Dundee and London: John Leng & Co., Ltd, is stated.

With the title and publisher I was able to ignore the dozens of cookbooks attributed to three or more dozen aunts and unwrap the layers to reveal that Aunt Kate is the pseudonym for Helen Greig Souter, an author who wrote several books on household subjects, aided by her popularity as the writer of Aunt Kate's Page in The People's Journal.

According to the Robert Mondavi Institute for Wine and Food Science, the cover of Aunt Kate's Cakes and Candies Book is "blue paper with image on front of woman at stove watched by 3 girls and a boy" (verbatim). The original cost was 1d (1 penny). I couldn't find an image of the exact cover, but here are 2 versions to give you an idea - on the left is a One Penny issue, and on the right another edition of my book, but years later as it shows the price as 2 pence. 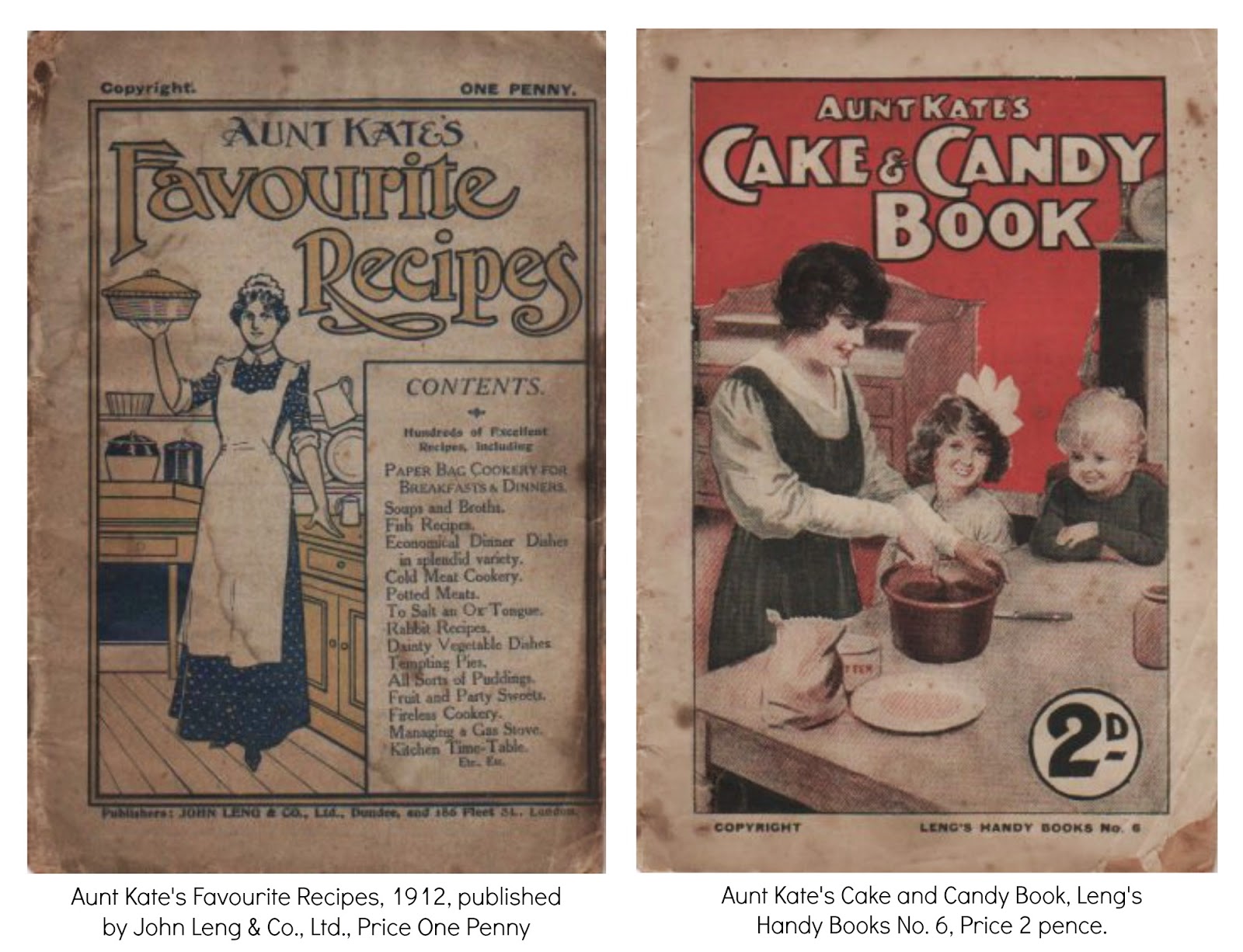 Aunt Kate's 48-page booklet had 3 pages which caught my eye including this one on candy recipes:

I won't show the other 2 pages that caught my attention here because they're really hard to read, but they were recipes and instructions for making ale, beer, and wine. As I read over them, the song with lyrics of strawberry wine floated through my thoughts, but my eyes latched onto the elderberry wine. Not that I've tasted elderberry wine, but my family values elderberry for its healthful properties in fighting throat and lung infections. Would elderberry wine have the same benefits? I guess it's a moot point though because we left our elderberry tree in the yard of a previous home.

The next cook book I'd like to show is not only missing a cover, it's also missing the first and last couple pages. However, because it was put out by the Zam-buk people who sell the medicinal salve/balm for every mishap, there is a Zam-buk full page ad on every second page and the title, Cookery Recipes at the top of every page. So that's what I googled.

The result was that I discovered the pamphlet, The Zam-Buk Book of Cookery Recipes, was printed in 191-. Nothing else on the internet gave a clue as to the actual year, but upon reading the fragile pages, I discovered an ad on pg 11 which gave a testimony dated 8th January 1912.

Considering all the ads, there are a surprising number of recipes which include the ingredients and instructions in a brief 4 or 5 lines in this little pamphlet. And I wasn't kidding when I said the pages were fragile, because as I unbent the folded corners prior to photocopying, small pieces of paper started falling off which stopped me right quick. I suppose 100 yr old newsprint deserves the dignity of being left alone.

Bringing some color to this post is the Five Roses Cookbook Bread Pastry Etc, 1915, by Lake of the Woods Milling Company Limited, Canada. Note the oilcloth cover, but ignore the white tape holding the covers together.

Although this 136 page book is put out by the Five Roses Flour Company, I only counted 5 or so pages of advertising including the 2 pages below which show the available sizes of flour for sale.

There were several pages of color photos of bread products, but instead of showing those - which look the same as today's versions - I thought I'd show you some of the recipes instead.

This page is eye-catching because of the spelling of cooky in the header, but cookies in the recipe titles. Also note the recipe for Ammonia Cookies which would be a great alternative for today's cough syrups.

A couple things on this next page caught my eye, namely the Yankee and Spanish Buns. The advert at the bottom is interesting because it states the use of Not-Bleached ~ Not-Blended flour, two things to show the purity of the grade. But I always thought non-bleached was modern and that everyone embraced bleached flour back then when it was introduced. Who knew it was a historic selling point?

The last cookbook for this post is The Best Way Book No. 3: 1200 Household Himts & Recipes, 1916, Amalgamated Press Printing Works, Southwark, London, U.K, with an original price of 6 pence.

As you might guess from the title, there was a series of Best Way books in the early decades of the 20th century and while I can't guarantee there are 1200 household hints in this book, its 146 pages are chock-full of recipes and ideas for healthy living.

This 5"x7" hardcover cookbook has been well used and several recipes have been written into blank spaces, a treasure for sure, but what stands out are the pages of Vegetarian Recipes because I hadn't realized the term was used back in 1916.

Other pages that drew me in were the ones on feeding children and infants and it was here that I found a full-page ad for store-bought canned baby formula.

The book includes pages on feeding invalids, laundry, housekeeping, and as shown below, money-saving tips and wartime economy.

This would have been a very valuable book of information at the time, and even today as it gives us a glimpse into early 20th century life. 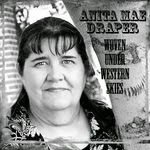 Anita Mae Draper is retired from the Canadian Armed Forces and lives on the prairie of southeast Saskatchewan, Canada with her hubby of 30 plus years and the youngest of their 4 kids. She writes cowboy stories set in the Old West, and Edwardian stories set in the East.  Anita Mae's short story, Riding on a Christmas Wish is published in A Christmas Cup of Cheer, Guideposts Books, October 2013. She is honored that Guideposts Books have chosen a second short story, Here We Go A-wassailing,  for inclusion in the 2014 Christmas Cheer II book set.   Anita Mae is represented by Mary Keeley of Books & Such Literary Agency. You can find Anita at   http://www.anitamaedraper.com/