Blurb:
Needing to finish her thesis in order to keep her job working with youth in a residential treatment center, Shana Arnold sequesters herself on Creighton Rice’s Nebraska ranch. She expects the secluded hideaway to provide a peaceful environment. What she doesn't expect is to become the victim of identity theft and a crazed home invader.

Creighton Rice has been content to live alone with his God--until he meets Shana. He's drawn to her, but must fight the attraction. Getting close makes him face a lifetime's accumulation of scars. Plus, Shana doesn’t share his faith. But when Shana's life is threatened, Creighton must protect her--even if it means letting her in.

Will Shana discover that even when a woman loses everything, she can regain courage and strength through faith in God, and can Creighton allow God to heal scars and open the door to a lifetime with Shana? 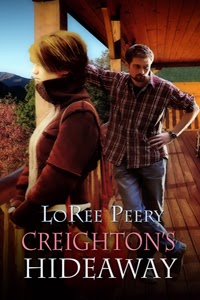 Excerpt:
I lift up my eyes to the hills—where does my help come from? My help comes from the Lord, the Maker of heaven and earth.—Psalm 121:1-2

A lilting soprano voice jolted him back to his childhood, and drew him like the legendary Lorelei. Chill bumps rose on his arms. The sensation rendered him as speechless as Shana’s kiss had the day before.
Creighton wound his way through the trees into the open, and stood transfixed when he spied the subject of his thoughts. An open hymnal was balanced on her upraised knees. Notes soared pure and light as Shana sang the lyrics to his mother’s favorite song.
God was surely present in this place. He closed his eyes and listened to Shana continue all the way through to the fourth verse. Shana lifted her chin. Her face glowed.
His heart picked up its pace, and his cheeks grew warm. Were there tears clogging his throat? Something he was slow to name filled his soul.
Then it came to him as Shana rose to her feet. Humbled. She’d humbled him.
God had given him a gift in this dark haired sprite who offered her friendship. And he had been too obtuse to appreciate its magnitude. Creighton’s feet remained in place as though they were stuck in a mucky feedlot.
“Hi.” She closed the gap between. “Is something wrong?”
“That song,” his voice rasped like a cornhusk. Creighton cleared his throat and tried again, “It’s my mom’s favorite. I grew up with her singing, especially when she pinned the sheets out on the clothesline to dry in the wind.”
Shana hugged the hymnal close. With a comical scrunched up face, she asked, “Did I slaughter it? I sight read the notes.”
“Not at all. It was beautiful. Your voice is lovely.”
“Thanks. I don’t sing much anymore.”
“Well, here’s your chance to use it. Come to church with me in the morning?”
The sky glowed pink and purple. While orange streaks danced along the horizon, he waited for her answer.
“Creighton, I left my business clothes in Lincoln. I only brought country clothes back with me.”
“No problem. We’re casual. But Rita has things up at the house.”
Reflections of the sun turned her cheek golden. “You’re right! She offered them to me. Guess I forgot.”
“So, do you want to check them out now?”
“Why not? Don’t think I have a hot date or anything.”
Creighton didn’t want to think of Shana dating. Instead, he nodded at the hymnal. “That belonged to my mom. She had one in almost every room of the house.”
“Did she sing in the choir or something?”
“Actually, she played the church organ.” He reached out his hand. “Here, let me carry that.”
Creighton tucked the old volume underneath his arm and wrapped his fingers around Shana’s hand.
She gave a secretive woman’s smile that tugged deep at his midsection.
They strolled through the brush strokes of sunset. A burst of reflected gold painted the clouds rosy pink in the east. The majestic sky squelched any more words.
At the ranch house, he laid the hymnal on the counter and ran his hand up to the light switch in one smooth movement.
“Rita tell you which room was hers?”
“Second on the other side of the bathroom.”
“Help yourself.” He entered the living area and turned on two lamps. “Since I didn’t feed you yesterday, I’ll rustle up something to eat.”
She turned down the hall.
How long would he be able to keep his dark side from Shana?

Bio:
A Nebraska country girl, LoRee Peery attempts to see God’s presence every day. Often that gift comes from nature, and she is most relaxed in the outdoors. The call of a cardinal draws her to look for the distinctive flash of crimson. A meadowlark’s melody always transports her to the farm where she grew up. A rainbow holds special significance, since one appeared the day of her father’s funeral and means the promise of the Lord’s presence in her life. She clings to I John 5:4 and prays her family sees that faith. You can find her at www.loreepeery.com or the Pelican Book Group sitehttp://tinyurl.com/kwz9enk