by Susanne "Dowager Duchess is #1" Dietze

My friends across the pond are enjoying another season of Downton Abbey (as are some of my American friends, thanks to the internet). The British television series about the fictional Crawley family (the Earl of Grantham, his wife and daughters) and their servants in the early decades of the 20th century is an international hit...and quite addicting. While I'm very, very curious about my friends Bates, Edith, Tom (stay away from that pushy schoolteacher, Tom!), and the rest of the upstairs/downstairs gang, I've held out from peeking online to see episodes.

Still questioning the wisdom of this. I could have answers!

But I wouldn't necessarily be able to speak about them, which is half the fun.


Meanwhile, I have my Downton Abbey possessions to comfort me (yes, this is a sad joke).

Last year I scored for Christmas. Mom gave my daughter and me D.A. necklaces that are super fancy. Here's my daughter's necklace. (You can buy them on Amazon, Macy's, The PBS Store, or even on the R.M.S. Titanic--they're everywhere!).

I was also given Downton wine last year (according to the label, it was chosen by butler Carson). I photographed it next to Downton Abbey wrapping paper, which I found at World Market right after Christmas (they also sold D.A. china, white with little gold and black flourishes).

Christmas dessert was taken care of, too, since I was given a D.A. plum pudding. It was dense, sweet, and chock full of raisins.

And this year my friend gave me some D.A. tea. It's delicious!
Looks like there are lots of new D.A treats for 2014, too.

Scouring Amazon, I found new goodies for this year. Behold, a cd of Lord Grantham's favorite Christmas tunes! Elizabeth McGovern (Cora) sings! The classical pieces look fabulous. Of course, this isn't the first D.A. cd. There's a soundtrack out, too. (I've heard it, and it's great.)
I think this cookbook may end up on my Christmas list, because I want to eat just like Lady Mary does (assuming she eats chocolate, tea sandwiches, and opera cake).
Want another book with pretty pictures? It includes photos, anecdotes, and recipes for "kedgeree, orange marmalade, asparagus tarts, cream of watercress soup, Irish stew, lemon barley water, meringues with red berries, parmesan straws, Christmas pudding with brandy butter and more." I'm not sure how I feel about lemon barley water, but if Carson serves it, I'll go for it!
Looks fun to me. But if your budget is a little tight (and $11 for an ornament isn't ridiculous sounding, which it is to me) why not bring a little D.A. to your tree with this bell pull?
If only I could ring for Carson.

Speaking of Carson, he's written a book on staff management. It'll be out Nov. 25.
﻿
Is there nothing that man can't do?

Last but not least--because I could go on forever, trust me--is the official board game. This is something I may have to buy so I can play with my local D.A.-fan friends, and haul in a suitcase to next year's ACFW for some cutthroat competition with a few Inkies.
Whom shall I be? Why am I even asking this when Tom is an option? If Deb Marvin beats me to that punch, I'll call the Dowager.
Oh wait, looks like our options are Faceless Anna and Faceless Barrow (aka Thomas, not to be confused with Tom, thank you very much). I'll pick the red Anna.
﻿
Squee! Roll the dice and have a sip of D.A. tea while the Christmas cd plays in the background. We're on! 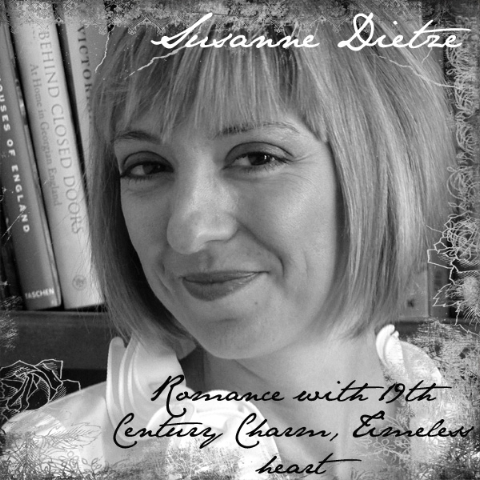 Susanne Dietze writes historical romance and has a bit of a Downton Abbey addiction. Just a bit. You can visit her on her website, www.susannedietze.com