Happy 6th Blog-o-versary To Us!

It's been 6 years since Gina Welborn realized a dream of bringing a group of female inspirational writers together for the purpose of friendship and support by way of the Inkwell Inspirations blog. Read Gina's inaugural blogpost where she introduced us to the world.

A mere couple of weeks later in September 2009, several of us met for the first time at the American Christian Fiction Writers (ACFW) conference in Denver, Colorado. The conference is now our annual destination for get-togethers - a time for tears and laughter as we share our rejections, accomplishments, and bloopers - a physical embodiment of Gina's dream.

Inktropolis has never been stagnant. As time passed, opportunities arose, and priorities changed. Some initial members moved on, and others took their place. And some of us have been there from the start.


Just because some Inkies can't make it to conference, doesn't mean they are forgotten.


Whether it's news of an award nomination or result, or the offer of a contract, we've prayed for each other and offered tears of comfort and congratulations regardless of the results.

And speaking of contracts, we have news to share. Three years ago, eight Inkies decided to create a novella series we called, Austen in Austin, where we took 8 Jane Austen heroines and transplanted them in late 19th century Texas. This past June, WhiteFire Publishing contracted all eight of our novellas and Inky joy flowed.

Thanks WhiteFire Publishing! And thank you to Roseanna White for designing our fabulous book covers and promotional aids. 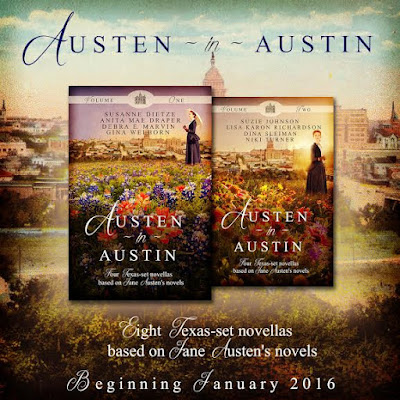 But best of all, the paperback version of Volume One is available for pre-order on Amazon right now!

Volume Two will follow along in September 2016 with novellas by Suzie Johnson, Lisa Karon Richardson, Dina Sleiman, and Niki Turner. And coming soon are the complete volumes, as well as individual novellas in ebook format.

As for the Inkies as a group, publication of the Austen in Austin series means every Inky has now reached publication status! Yay!!!

We want you to share our success! Leave a comment on this blogpost before midnight tomorrow Sept 1st, 2015, and we'll draw one name for each $25 Amazon gift card.


The Inkies will be giving away Austen in Austen Volume One postcards while at the ACFW conference in Dallas, TX this September. If you see us there, just ask and it's yours. 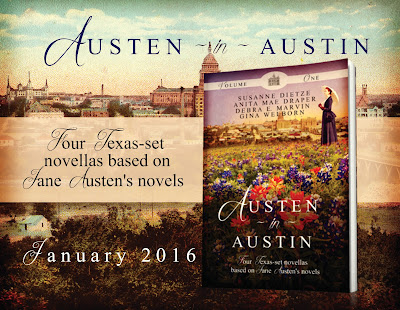 Don't forget to leave a comment with a way of contacting you and we'll put your name in the draw for one of the $25 Amazon gift cards.