Welcome to a Q and A session with one of my long-time favorite authors, Sandra Bricker. If you've not yet picked up one of her books, I  hope this will inspire you. ~~ Suzie 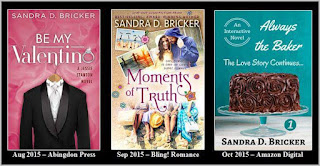 Q: YOU ALWAYS SEEM TO HAVE SOMETHING NEW AND EXCITING GOING ON. TELL US ABOUT YOUR WRITER LIFE THESE DAYS.

A: Thanks! It’s good timing because I actually have a lot to talk about. This month, in particular. I was fortunate enough to sell a series close to my heart last year to Abingdon Press, so I’ve been able to spend a great deal of time with a new cast of characters that I’ve come to love. The Jessie Stanton novels started with On a Ring and a Prayer this past spring. I had no idea how readers would receive it because it was my first novel after transitioning from “Laugh-Out-Loud” romantic comedy to “Live-Out-Loud” romantic fiction.

Q: WHAT DOES THAT MEAN, EXACTLY?

A: Well, I was branded early on in my fiction career as someone who wrote fun, entertaining books that were kind of quick, fluffy reads. I’m not complaining, of course, because I loved those books and characters. So did my readers. But I started feeling like I had something more to say. After all, my own personal life has been pretty dramatic … so I pitched a story with a thread of drama to it.

Q: TELL US ABOUT IT.

A: Each of the three books revolves around Jessie Stanton. Jessie grew up in Slidell, Louisiana, and spent most of her adolescence dreaming of escape. When she does, she lands in Malibu, California, and finds everything she always thought she wanted.

Q: THAT’S A FAMILIAR STORY FOR YOU, ISN’T IT?

A: Extremely. I was a Cincinnati kid who also lived in Slidell, and eventually ran away to L.A. For Jessie’s story, we meet her after 12 years of marriage, living in 4,000 square feet of dream house with a BMW in the garage, jewels in the safe, and a dreamy Neil Lane rock on her finger. Jessie couldn’t really ask for more. Until one fateful afternoon anyway when everything crumbles to nothing. That’s when Jessie sets out on her three-book odyssey.

Q: SO THE FIRST BOOK CAME OUT IN THE SPRING. WHAT ABOUT THE NEXT TWO?

A: Book 2 is called Be My Valentino, and it comes out in about … (checking watch) … a few days! In the first book Jessie sold her Neil Lane ring, packed up all her designer labels, and opened a store called Adornments where customers can rent out her slightly used duds. She also became entwined with the mega-cute surfer dude who was the only private investigator she could afford. Well, by the time Valentino opens, Adornments has become the place to be for D-List stylists and wannabe celebs who can’t afford their own designer labels. Jessie’s relationship with Danny takes a dramatic turn, but Jessie really struggles with the concept of putting her faith (and heart) into another relationship after what she’s been through already.

Q: AND BOOK 3? TELL READERS ABOUT THAT ONE.

A: Book 3 will come out next spring. It’s called From Bags to Riches, and it brings Jessie’s renegade husband back onto the landscape. He brings confusion, deception, and charm to the table. Jessie and Danny have to make some decisions and untangle some knots in order to see if they can even think about their happy ending.

Q: WE CAN ALREADY SEE THE MORE DRAMATIC TURNS YOU MENTIONED. WHAT ELSE ARE YOU WORKING ON?

A: Maybe two of my most exciting projects are coming up in the near future. At the end of September, the novel I consider “the book of my heart” will be released by Lighthouse Publishing of the Carolinas. Moments of Truth is about five very unique women, each of them with their own relationship challenges. They started out as a monthly book club and evolved into a weekly get-together over food, wine and girl talk … with the book talk eventually falling by the wayside. I’ve always been a big beliver in Girl Power, so this was a really fun book for me to write because of that … but also because it reaches beyond my traditional spot in the CBA market. Out of the five women in Moments of Truth, only one comes from the Christian perspective. I did that on purpose. Perhaps because I came to the Lord later in life, I’m keenly aware of how someone’s Biblical values can color outside the lines and touch almost every life around them. I was able to use one of my characters to demonstrate that.

Q: YOU HAVE SOMETHING SPECIAL FOR YOUR READERS RELATED TO MOMENTS OF TRUTH, DON’T YOU?

A: I do! I’m a longtime believer in the magic that happens when women join forces. Because of that, I have a special website set up for the book, and I’m inviting readers to submit stories and pictures of themselves with their BFFs. Each month, I’ll choose one to be featured on the site in honor of Girl Power!

Q: YOU SAID THAT WAS ONE OF TWO MORE PROJECTS YOU’RE WORKING ON. WHAT’S THE OTHER?

A: The second is a labor of love for my readers. I’m taking the characters from my Another Emma Rae Creation series and writing something that picks up with Emma and Jackson still living in Paris after their wedding. What will be different about Always the Baker: The Love Story Continues is that it will be released in ebook form only and in three separate novella-length sections. This will give readers the opportunity to vote after the first and second parts on which direction the plot will go, and I’ll write it just for them. They’ve always been so profoundly invested in Emma’s story that I thought they might really have fun with something like this.

Q: WHY RELEASE IN EBOOK FORMAT ONLY?

A: Well, because I need that format to allow readers to vote in between releases. After all three parts have been released, I’ll probably go back and publish the whole thing in both ebook and print, but for now I’m just looking at the first one coming out in November and giving readers a chance to have a hand in Emma’s future.

Q: AS ALWAYS, THERE’S A LOT TO TALK TO YOU ABOUT. THANK YOU FOR JOINING US AND SHARING YOUR NEWS WITH OUR READERS.

A: I’m so happy to do it. Thank you for having me!

BIO: SANDRA D. BRICKER was an entertainment publicist in Los Angeles for 15+ years where she attended school to learn screenwriting and eventually taught the craft for several semesters. When she put Hollywood in the rearview mirror and headed across the country to take care of her mom until she passed away, she traded her scripts for books, and a best-selling, award-winning author of LIVE-OUT-LOUD fiction for the inspirational market was born. Sandie is best known for her Another Emma Rae Creation series for Abingdon Press. As an ovarian cancer survivor, she gears time and effort toward raising awareness and funds for research, diagnostics and a cure.
Posted by Suzie Johnson at August 07, 2015