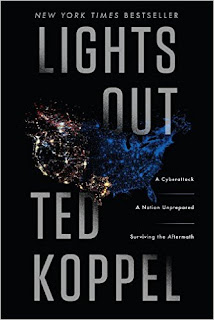 Lights Out: A Cyberattack, A Nation Unprepared, Surviving the Aftermath is the latest entry into the pantheon of doomsday literature. What makes it unusual is the fame and stature of its author, Ted Koppel, former anchor for ABC News’ Nightline program. While there have been many other “We're all going to die!” books published over the years, Koppel’s name and access to friendly media interviews have brought this one more attention than most.

Why would anyone want to read something so potentially depressing? For one thing, people kind of like to be frightened. No, really. Consider the popularity of horror novels, slasher flicks and roller coasters. Okay, only one of those is my “thing,” but I can’t deny that the adrenaline rush of a 100-foot drop keeps me paying amusement parks’ big entry fees. Thing is, those scares don't cost us much other than a few bucks (and in the case of a horror novel, maybe a night's sleep). We know roller coaster rides are actually safer than a drive to the grocery store, and as I tell my husband whenever he gets queasy watching a graphic scene in a television drama, "It's only a prop, honey. It's not a real body."

However, the world is experiencing a great deal of turmoil right now, which moves apocalyptic claims past mere fiction to the realm of possibility. Sure, there have always been wars and natural disasters, but they tended to be localized. A civil war going on in Rwanda? How sad, but it wasn’t part of my vacation plans for this summer anyway, so why would that concern me? Now we are witnessing chaos on a global scale. A civil war in Syria? As a matter of fact, that does impact me because ISIS has supporters and imitators all over the world. The “Pax Americana” of the past 70 years is coming to a close, and the technology which makes our lives so pleasant – we live better than humans of any other time – can be used against us.

Last year I was the victim of cyber theft. I don’t even know whose computers got hit. My grocery store’s? My credit union’s? Somehow, hackers had gotten both my credit card and ATM card information. It couldn't have been from the breech of Target's systems the year before because (since I had used both at Target during the time frame in question) I had called the credit union and insisted they replace both. (They kept arguing it was unnecessary. I was adamant that they issue me new ones. I won.) The credit union called about the suspicious activity on the credit card. I only found out about the ATM issue two days later when I went to use the card and it rejected.  The fact the hacker had made a new ATM card and had obtained my pin showed how sophisticated the theft was. Fortunately, VISA removed the charges from my bill, and my credit union made good on the money stolen from my account. I guess the credit union person believed me when I claimed I hadn’t driven 200 miles and back in a snowstorm to use an ATM. Or, more likely, I was only one of many victims that week.

My hackers just wanted quick cash, like the Russian mafia that hit one of my computers with ransomware a few months earlier and then offered to give me a fix for a “small” fee. (Uh, thanks, but no.) But what if someone with truly evil intentions was able to breach the security systems guarding the computers that control our lives and economy?  Imagine a power outage stretching across dozens of states and lasting weeks or even months.

The subtitle of Lights Out – A Cyberattack, A Nation Unprepared, Surviving the Aftermath – reveals the book’s organizational structure. The first part details the likelihood of a successful attack on the American electrical grid and its consequences. The second (shortest) section claims the government is woefully unprepared to deal with a large-scale, extended-time outage. The final portion of the book highlights people and groups who practice emergency preparedness, so the reader can develop a plan.

What is my verdict? Well, first let me say this is a powerful book. A couple days before Christmas, I picked it up at the library on my way to take the boys for haircuts. There I was at the barbershop, reading while I waited, when the lights went out. Everyone in the shop got a good laugh when I showed them what I had in my hands. And then I took the book with me when we traveled to visit my husband’s family for the holidays. The day after we arrived at my sister-in-law’s house, an ice storm knocked out the power for 18 hours. Reading the thing in the dark for the second time, I began to wonder if God wasn’t giving me a visual message. You can bet I returned the book to the library as soon as we got home, before further electrical mishaps befell my family.

Beyond the funny coincidence, I always have mixed feelings about the whole “prepper” lifestyle. Some of the cases presented in Lights Out cross the boundary between precautionary and extreme – you know, the people with 25 years worth of MREs, a solar power system that could run an aircraft carrier, and enough firepower to conquer a small country. On one hand, I think of verses like Luke 12:27 (Consider the lilies how they grow: they toil not, they spin not; and yet I say unto you, that Solomon in all his glory was not arrayed like one of these.) that remind me God is ultimately in control. That said, dependence on God didn't stop Nehemiah from rebuilding the wall or David from taking up a sword. God wants us to use our brains and do our part to protect ourselves and our families.

But I struggle to find balance. How much is too much? Can too prepared cross over to too paranoid? How many precautions should one take against the unforeseen, and at what point should one hand the entire mess over to God?

I meant to add this earlier, but for those who have the time, this is a longer interview Koppel gave: