Do you recognize this plant?

Yes, it's the time of year when this obnoxious weed invades my yard. Leaves be three, leave it be, they say. Yeah, well good luck with that, unless you intend to spend the next four months indoors. In my little corner of paradise, poison ivy grows everywhere.

It's pretty easy to spot twining up the trunk of a Japanese cherry tree. 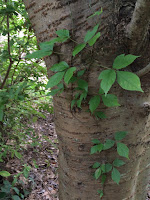 It's not as easy to see in the grass. 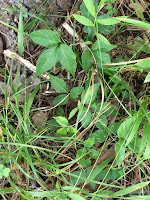 And here it cleverly hides among cute, inoffensive English ivy. 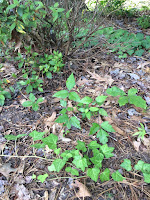 Every year I get out the sprays to rid my piece of ground of this itch-inducing plant. I'd rather not resort to chemicals, but there are few alternatives to ridding oneself of a plant that can't be touched. Did you know that a person can get a poison ivy rash without even touching the plant? All you need is to come into contact with something (gloves, shoes, clothing, pets) that brushed against the leaves. (This actually happened to one of my aunts, who got a reaction from washing her husband's blue jeans. Sounds like as good an excuse to avoid the laundry room as any.)

But here's the worst part. No matter how much I fight the creepy creeper, it always comes back the next year. Just when I think I've won, it invades from another direction.

As I had the spray out for the third time this year, I realized it's a lot like the sin in my life. I fight it constantly, but every time I think I have it under control, I find it growing in another spot. Like poison ivy, this is a battle I will fight for my entire life. Fortunately, I don't fight alone as there is one who gives me the ultimate victory.

Blessed is the one    whose transgressions are forgiven,    whose sins are covered.
Blessed is the one    whose sin the Lord does not count against them    and in whose spirit is no deceit.
When I kept silent,    my bones wasted away    through my groaning all day long.
For day and night    your hand was heavy on me;my strength was sapped    as in the heat of summer.
Then I acknowledged my sin to you    and did not cover up my iniquity.I said, “I will confess    my transgressions to the Lord.”And you forgave    the guilt of my sin.
-- Psalm 32:1-5 (NIV)
Posted by C.J. Chase at June 29, 2016