Hi gang! Susanne here, and I am tired but happy! Just got back from Romance Writers of America's Annual Conference in gorgeous San Diego. (I am biased about my hometown, but it's a great place to be.)

It was a blast. Wednesday I attended the Annual Meeting for Faith Hope And Love chapter, where the winners of the IRCA and Touched by Love Contests were announced. Congratulations to all!
RWA had some big news this year--The inspirational category for RWA contests will have a name change!


Later, I passed out Bingo sheets for a Faith Hope & Love Chapter Bingo game at the Literacy Signing. If you stopped by the tables of the FHL members who were signing, you got a sticker of their book cover for your Bingo sheet. If you got Bingo, you could get entered to win a nice Amazon gift card!

The workshops were amazing, as usual. Soon I'll share a few highlights in another post, but a few of the workshops I attended were Series Bible: The Savior of a Long-Running Series, presented by Jaci Burton and Jill Shalvis; Chemistry by Sherry Thomas, and Winning the Promo Game (part of the PAN retreat).

Networking is always a fun and important part of writing conferences. The Harlequin Pajama Party offered just one of the many opportunities I had to catch up with old friends and make new ones!
Some things were new to RWA this year, like The Swag Shoppe.

In the past, attendees were given a tote stuffed with free books when they arrived at the conference. The sponsored books represented a variety of genres: YA, historical, sweet, erotica, etc, so as you can imagine, not everyone wanted every book she received. What to do with those books you don't want? Well, some attendees took them home. Others started stacks in public areas so passersby/other attendees could take their extras.

To address the waste, this year attendees were given a voucher good for one visit to the Swag Shoppe. Once inside, we could take one of anything we wanted--but there was no going back. I scored a RWA 2016 beach towel, a selfie stick, a a BPA-free water bottle with a fruit infuser, and of course BOOKS!

The Swag Shoppe is not to be confused with the Goody Room, which was open to all attendees whenever they wanted to peek in. Authors could leave promotional swag for others to take, but the rules this year stated all items must be in a container--no leaving postcards, books, pens, magnets, band aids, etc on the table. I dropped by a handful of times to pick up swag. There is no excuse for not having a pen handy at RWA!

A milestone for me? I got to attend my first Harlequin party. WOW! Fancy! It was held at the Omni hotel nearby.
And while we're talking fancy, I have to mention the Gala. RITA and Golden Heart winners were announced--congratulations to the winners! Special congrats go out to Kristi Ann Hunter who won the Inspirational category with her debut novel, A Noble Masquerade.
I look forward to going through my notes, processing, and applying what I've learned--and looking up all my new friends on Facebook! But today, I think I'll take a nap first. 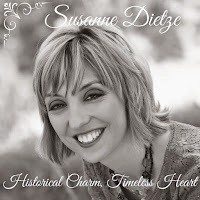 Susanne Dietze began writing love stories in high school, casting her friends in the starring roles. Today, she's the award-winning author of over half-dozen historical romances who's seen her work on the ECPA and Publisher's Weekly Bestseller Lists for Inspirational Fiction. Married to a pastor and the mom of two, Susanne loves fancy-schmancy tea parties, cozy socks, and curling up on the couch with a costume drama and a plate of nachos.