(Note from Jen: Although this article comes form Randy's Advanced Fiction Writing E-Zine
his advice on creating good habits can be applied to any area of life. Enjoy!)

We all know people who seem to sail through life. They always have it together. When things go right (which is most of the time), they’re always working productively or playing hard or flossing their teeth. When things go wrong (which seems to be rare), they surf right over those glitches and carry on.

I think we all secretly despise those people. They seem to have their lives on autopilot, never struggling. That’s not fair. 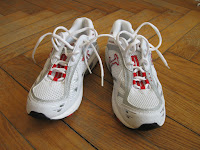 My hunch is that these people actually do struggle, but we just don’t see it. They put in serious effort, but they put in their effort in a different way than most of us do.

These annoying people put their effort into creating good habits. I wrote about the habit of making habits in this column in January. Since then, I’ve had some new thoughts on it. If you missed that column, you might want to read it now. If you’ve forgotten it, you might want to review it on this page.

It takes some serious effort to build a habit. Once you’ve got a good solid habit going, you don’t have to put in much will-power to keep it going. The habit keeps going under its own steam. You just maintain it. You appear to be coasting.

The conventional wisdom is that it takes 21 days to get a habit running under its own steam. But that only works if you can actually get through those 21 days. And it’s easy to sabotage that startup effort by trying too hard.

Let’s look at an example to see what can go wrong.

You decide you’re going to get back in shape. Back when you were younger, you used to run five miles per day. You can do that again, right? Sure you can. So you get your exercise gear all together, you set your alarm, and you wake up tomorrow all charged and ready to go.

You limp back home, thinking that you’re not 18 anymore. You ice your knee. You get cleaned up. And you dial back your expectations to 2 miles per day for tomorrow.

Tomorrow morning when the alarm goes off, every muscle in your body is sore. Your knee still hurts. And you decide you’d better give yourself a recovery day.

You wind up in recovery for three weeks, and finally your knee feels better. Then you either repeat the whole thing, or else you give up.

What went wrong was that you put two hard things together in the same place. It’s hard to instantly raise your daily mileage by five miles. It’s also hard to form a habit.

But don’t. Do a ridiculously easy workout until your habit is firmly in place. Why? Because you’re doing something else that’s already hard—you’re using your will-power to build a habit.

That’s very hard. Don’t make it harder on yourself. Make it ridiculously easy to do it every day.

When you do that, you WILL do it every day. You may feel stupid for “only” doing such a little bit. Don’t. You’re not being stupid. You’re being smart. You’re exercising your will-power to get yourself in the groove.

Once that habit’s solidly in place, ramp it up. Not a lot. Ramp it up a little. If you were walking half a mile a day, boost that to walking three quarters of a mile. Or jog the last eighth of a mile at an easy pace. Or whatever. And stick to that new regime for a ridiculously long time. Maybe a week. Maybe two.

Life is not a sprint, it’s a marathon. Habits that you build now that you keep in place for the next thirty or forty years will give you ridiculously great benefits.

You may know writers who put in eight or ten or twelve hours of writing, seven days per week. You may feel horrible because that’s not you.

It’s not me, either. It’s not most writers.

Make it a habit to do that on a set schedule—five or six or seven days a week. Without fail. No excuses. (And why would you make an excuse to skip a ridiculously easy thing that you enjoy doing?)

Thirty or forty years from now, you’ll look back on a long career in which you produced an amazing amount.

You may never be one of those obnoxious people who sail through life without a struggle. So if you’re going to struggle, put your effort into the things that matter.

Building a daily writing habit is a thing that matters.

Even if it’s ridiculously easy.

Award-winning novelist Randy Ingermanson, "the Snowflake Guy," publishes the free monthly Advanced Fiction Writing E-zine, with more than 14,000 readers. If you want to learn the craft and marketing of fiction, AND make your writing more valuable to editors, AND have FUN doing it, visitwww.AdvancedFictionWriting.com.

JENNIFER ALLEE was born in Hollywood, California, and spent her first ten years living above a mortuary one block away from the famous intersection of Hollywood & Vine. Now she lives in the grace-filled city of Las Vegas, which just goes to prove she’s been blessed with a unique life. When she’s not busy spinning tales, she enjoys playing games with friends, attending live theater and movies, and singing at the top of her lungs to whatever happens to be playing on the car radio. Although she’s thrilled to be living out her lifelong dream of being a novelist, she considers raising her son to be her greatest creative accomplishment. To find out more about her novels, visit her website at http://www.jenniferallee.com
Posted by Jennifer AlLee at August 10, 2016