Criss Cross was very suspenseful! A page turner!
Poor Holly Smith is constantly running from her past and can’t get close to anyone! She is a free-lance photographer who rarely makes friends but finds one in her upstairs neighbor girl, Jace, who is in a wheelchair. After being attacked right after a photo shoot, Holly finds a father figure in the detective assigned to her case. 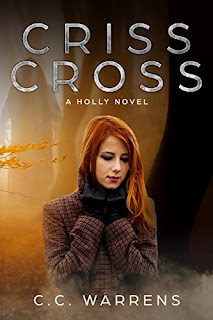 It is a very bumpy ride for Holly to figure out who is stalking her. It’s someone from her past but trauma has blocked out her memories before age ten. Can her new guardian, Detective Richard Marx, help her unravel her broken memory and the puzzle of who wants her dead? And once one puzzle is solved is another one close behind?
Holly has a fledgling faith but circumstances and people help her to grow amidst the turmoil.
This is the first in a series.
If you like Lynnette Eason, DiAnn Mills or Irene Hannon, you will most likely be riveted by this book!
Well done C.C. Warrens!
Amazon Link

Holly is living on borrowed time, but when mysterious footsteps follow her home and a cryptic note shows up on her door, she realizes her time is running out. The man she's hiding from has found her. Or has he? When people start dying and old, forgotten memories begin to surface, holly finds herself wrapped up in a terrifying mystery with God, a pushy southern detective, and a killer with one thing on his mind: her.

*I was given an e copy of this book by the author but was not obligated to review, nor give a positive review. All opinions are my own.*
Posted by Debra E. Marvin at February 13, 2018