One of my favorite mystery/suspense authors has done it again!
Dangerous Illusions is the start to a new series: Code of Honor. And this novel has suspense galore. It also has a capable hero and the requisite damsel in distress. But with Irene Hannon— even if you take a good guess at what is going to happen—she doesn’t skimp on the thorough details to make this one a terrific read! 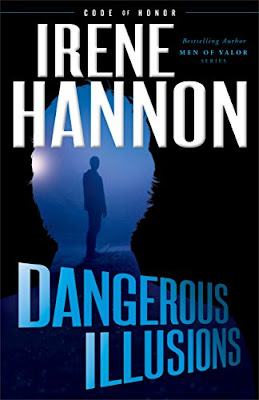 One reason I like Irene’s stories is that they take place in St. Louis, where I spent many years. She peppers her settings with places I used to frequent.

This story had some fresh elements to it including dropping in the Russian Mafia!
Trish Bailey is a very likeable art teacher in the inner city. But she also has a trust fund and has inherited her parent’s house in an upscale suburb of St.Louis. She has had her share of tragedy but is methodical and resolute and has a strong faith in Christ.
Colin Flynn is a detective and has caught the case involving the apparent accidental death of Trish’s mother. Can Trish and Colin get to the bottom of some unsettling circumstances ? What other things will they uncover? Can they embark on a new romance and will Trish pass the scrutiny of Colin’s two lifelong friends?


If you want a thrill ride pick up this book! Irene Hannon never disappoints!


Trish Bailey is on overload trying to deal with a demanding job, an ailing mother, and a healing heart. When a series of unsettling memory lapses leads to a tragic death--and puts Trish under police scrutiny--her world is once again thrown into turmoil.
Detective Colin Flynn isn't certain what to think of the facts he uncovers during his investigation. Did Trish simply make a terrible mistake or is there more to the case than meets the eye? As he searches for answers, disturbing information begins to emerge--and if the forces at work are as evil as he suspects, the situation isn't just dangerous . . . it's deadly.

Bestselling and award-winning author Irene Hannon captures readers with a mind-bending story that will have them doubling back to retrace their steps--and figure out what they missed!


*I was given an e copy of this book by the author but was not obligated to review, nor give a positive review. All opinions are my own.*