Story. It's the backbone of novels, movies, plays, even epic poems. Yes, witty dialogue can make you laugh and well-executed setting can put you "there," but at the end of the day, we remember the story. If you've ever told a friend about a great new movie and she asked, "What's it about?" -- that's story.

A good story is powerful because it taps into universal human aspirations and desires and emotions. Indeed, even God speaks to us in stories -- the stories of the Old Testament, the parables of Jesus.

Mythologist Joseph Campbell was one of the first to look for patterns in stories. What were the common elements in the world's great stories? What story structure appeared over and over? Did great stories progress in similar ways? Years later, Christopher Vogler was working as a consultant for Disney in the 1980's when he distilled Campbell's work into a 7-page memo that electrified Hollywood.

1. The Ordinary World. We first meet the hero in his ordinary world, living his ordinary life. It's cynical Rick in his Casablanca bar where he never drinks with customers and sticks his neck out for no one. Oftentimes, the ordinary world is an okay place, and yet our intrepid hero may express feelings of dissatisfaction. Something is missing. Think of Luke Skywalker dying to get off his uncle's farm. Or consider when we first meet Belle in Beauty and the Beast. What is she doing? Singing about her boring life in a boring town: There goes the baker with his bread like always/The same old bread and rolls to sell/Every morning just the same....

2. Call to Adventure. Suddenly, the hero is presented with a challenge to take action. The call to adventure is Luke Skywalker cleaning a droid--and seeing a hologram of a beautiful woman pleading for help. It's Frodo, inheriting a dangerous ring. It's a shepherd hearing God speak from a burning bush. Or it's a fisherman hearing a rabbi say, "Come. Follow me."

3. Refusal of the Call. While the ordinary world might be boring, our hero knows it's safe. Fear of the unknown or danger may well cause our hero to offer excuses. I have to help my uncle on the farm, says Luke. I can't speak well, says Moses. Nineva? No way, says Jonah. I won't sell my houses and lands to follow an itinerate rabbi, says the rich young ruler. 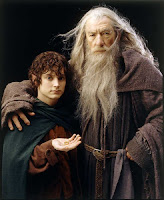 4. Meeting of the Mentor. Fortunately, our hero has a mentor who encourages him to take up the challenge. The mentor trains and advises the hero, seeing that he attains the skills he'll need for the tasks ahead. Mentors push you to be a better knight or a better king or just a better person. Think of Obi Wan Kenobi serving in this role for Luke Skywalker, Merlin for Arthur, Naomi for Ruth, and Ananias for Paul.

5. Crossing the Threshold. If you are familiar with ancient history, you know what happened when Julius Caesar crossed the Rubicon with his army. When a hero crosses the threshold, he too has taken an irrevocable step. He has accepted the call and has left his ordinary world for the adventure ahead. Remember Luke returning to the farm, only to find his family dead? He leaves with Obi Wan to join the rebel alliance. Romeo abandons Rosaline forever and pledges to marry Juliet. Peter, a lowly fisherman so cowardly he denied knowing his Lord, suddenly preaches to a crowd of thousands.

6. Tests, Allies, and Enemies. Once a hero has committed to the cause, he will find that commitment tested. A life of adventure is never easy--isn't that what our hero initially feared? He will make allies who assist him, like Luke teaming up with Han Solo or Dorothy meeting the Scarecrow, Tin Man and Lion. And then he will also encounter enemies who will try to foil his aspirations. After his defeat of Goliath, David made a friend in Prince Jonathan and gained an enemy in King Saul. Moses reconnected with his brother Aaron and earned the enmity of Pharaoh.

7. The Inmost Cave. Here, the hero comes to a dark and dangerous place where he will have to face his fears. To rescue the princess, Luke Skywalker has to board Darth Vader's ship. Belle accepts the call to rescue her father but now she has to live in the Beast's castle forever. Daniel violates the law to pray and must now accept the punishment of death in the lion's den. Peter preaches to the masses--and ends up in prison for his troubles. 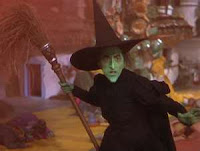 8. The Supreme Ordeal. Dark, scary caves come with troubles. The time has come for the hero to confront his deepest fear, to look death in the eye if he ever hopes to escape the cave. Dorothy must confront the Witch in her own castle. Ruth must risk rejection or worse by approaching Boaz on the winnowing floor in the dead of night. Elijah must face down Ahab, Jezebel and all 450 prophets of Baal.

9. The Reward/Seizing the Sword. It seems as if the hero has completed his journey. He faced the supreme ordeal and overcame it. Woody and Buzz have become friends and made it to the moving van just in time. Rick has reconciled with his old flame Ilsa. Moses has led the people through the Red Sea to the edge of the Promised Land. After years of being a wanted man, David is finally king.

10. The Road Back. Unfortunately, victories are often incomplete. The hero must recommit to finishing the journey. Woody and Buzz reach the van, only to have Scud the dog attack before they are safe. The Beast has fallen in love only to have the castle attacked by the local mob. The spies return from Canaan with a report of giants in the land, and the people refuse to enter. Elijah's great victory is followed by flight into the desert to escape Jezebel's wrath. Peter is rebuked by that upstart Paul for not treating Gentile Christians as equals.

11. The Resurrection. The road back comes with severe testing in the ultimate climax. Belle must convince Beast to fight back--but is she too late? In Casablanca, Rick gets Ilsa and her husband onto the plane, only to have a Nazi officer show up. David is king only to watch his own son try to kill him and take the kingdom away. Joseph must at last confront the brothers who sold him into slavery and decide between forgiveness and revenge.

12. Return with the Elixir. The hero has overcome his trials and tribulations and can now enjoy his reward. Luke Skywalker gets a medal of commendation. Belle and her Beast (now a handsome prince) dance while their friends look on. Frodo sets sail for the undying lands. King David proclaims his son Solomon as the king to follow him. Joseph and his brothers live happily ever after in Egypt. The prodigal son is accepted back into his family.

Now that you understand the structure of the world's most famous stories, you may never watch a movie the same way again. But what about you? Did you find yourself in there? Are you currently refusing the call? In a dark cave? On a road back?

Every person is the hero of his own life. The ordinary world--the fallen world where we live--may leave us dissatisfied, but still, it seems safe and familiar. We each receive a call to adventure, to a new life in Christ, which we must either accept or refuse. Mentors come along beside us to offer wise counsel and encouragement. We make allies who will help us face trials, and unfortunately, we encounter enemies who will try to make us stumble. There are the dark times when we feel we will never leave the scary caves of life. And then there are the times when we feel like we are in an endless loop of triumphing over one adversity only to have to face another ordeal. But we recommit to the adventure, to finishing the journey so that we will someday say with Paul, "For I am now ready to be offered, and the time of my departure is at hand. I have fought a good fight, I have finished my course, I have kept the faith: Henceforth there is laid up for me a crown of righteousness." (II Timothy 4: 6-8)

Where are you on the "Christian's Journey"?

C.J. Chase writes for Love Inspired Historicals. Her debut novel, the winner of RWA's 2010 Golden Heart award for best inspirational romance, will be available in August under the title Redeeming the Rogue. C.J. lives in the swamps of Southeastern Virginia with her handsome husband, active sons, one kinetic sheltie, and an ever-increasing number of chickens. When she is not writing, you will find her gardening, watching old movies, playing classical piano (badly) or teaching a special needs Sunday School class. You can read an excerpt of her book at: http://www.cjchasebooks.com/
Posted by C.J. Chase at June 08, 2011