by Niki Turner
This weekend, the community where I live will reenact a massacre. Sounds strange, doesn't it?
One warm July weekend 13 years ago I walked out of my house in the evening to get something out of the car and heard the sound of Indian war whoops echoing through the valley.
"What on earth?" I asked.
"Just rehearsals for the pageant," I was told. The "massacre."
Or an "incident," depending on who you talk to. I know, it's SO politically incorrect, no matter how you look at it, but it has been going on for the last 73 years, and no one seems compelled to quit. Hey, to each their own.
The Meeker Massacre is widely regarded as the last Indian uprising in the United States. The Thornburg battle, a direct result of the massacre, took place just a few miles from my house (more on that in another post.)
In 1879, Indian agent Nathan Meeker and the rest of the white male settlers (numbers vary from seven to 10) at the White River Agency in northwest Colorado were killed by Ute Indians. The women and children were captured and held hostage for weeks until Ute Chief  Ouray and his wife Chipeta were able to orchestrate their release. It's said that Meeker's daughter Josephine's arguments kept the hostages alive until their release.
One might think he was a hero (after all, there's more than one town named after him). But heroes have to have heroic characteristics. In my opinion, Nathan Meeker lacked those essential qualities.
Don't misunderstand me, every great hero has flaws (except Jesus, of course). But as writers, as builders of heroes, we have to be careful to differentiate between a flawed hero and an antihero. A flawed hero can be loved, because his basic character, his motive for action, is essentially good. An antihero, on the other hand, may rise to a position of power and authority, but his motives are skewed.
As with most of the controversial treatment of Native Americans by the American government, there are conflicting variations of the history that led up to the attack on Meeker and the other white settlers. Meeker was appointed as Indian agent by his friend, Horace Greeley, to whom Meeker was indebted financially. His dream? To establish a perfect, Utopian community. He and Greeley had established Union Colony (present day Greeley, Colo.) in hopes of achieving that dream, but although the colony was a success, Meeker wasn't satisfied. He accepted the assignment of Indian agent in northwest Colorado, supposedly with the idea he could take the Indians there and create a perfect socio-political-economic community.
The Indians weren't what he was expecting.
First, they were hunter/gatherers, not farmers. The very idea of farming seemed foolish to them. The menfolk went on extended hunting excursions, harvesting the plentiful elk and deer in the area, and the womenfolk foraged and took care of the homestead. Staying at home and plowing the ground was a ludicrous idea, as far as the Utes were concerned. Meeker refused to back down. First, he moved the white settlement smack into the middle of the land the Utes used to pasture their beloved ponies. Second, and what some consider the last straw, he plowed up the ground where they gathered to race their ponies. 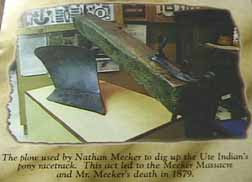 The Ute warriors dragged Nathan Meeker through the streets of the Agency he was in charge of, poured sugar into his mouth (he spoke sweet words to them) and then drove a barrel stave down his throat (he speaks with two mouths.) No one who reads the story can deny the symbolism employed by the Utes in the death of Nathan Meeker.
Some say Meeker was an outright liar who frequently made promises to the Indians and then failed to keep them. Others say he was a visionary and idealist, innocently caught in the crossfire between his dream of creating a Utopian society and a bunch of heathens who refused to change their ways. Some say he had a violent temper, and by words and actions provoked the Utes to reciprocate with uncharacteristic violence.
Others say he was merely misunderstood, a man of great dreams and ideals, if weak communication and diplomatic ability.
Personally, I see a case of a man's vision taking him places where his character was not strong enough to keep him. A man so committed to his idealistic vision he forgot about the souls, the lives of the people to whom he was responsible. He valued his personal vision and goals above the human beings around him.
When we look back at history, whether we're examining pirates, Indian agents, Confederate generals or English royals, sometimes it's difficult to determine who was right and who was wrong. As writers, it's important to realize there were heroes and antiheroes on both sides of every conflict. Our job is to create heroes, not antiheroes.
What makes an antihero? I suppose it depends upon your definition of a hero.
In my mind, a true hero is one who, above all else, values honesty and humanity. If it means he has to adapt, even compromise, for the sake of saving souls and remaining true to his word, he'll do so. He'll show mercy when an antihero will only mete out justice. As described in Psalm 15,
He swears to his own hurt,
and does not change;
Ps 15:4 NAS
Sometimes holding fast to your own promises is painful. Sometimes it costs you something to keep your word. But the one who does, that one is a hero, and those men (and women) are few and far between, in fiction and in reality.
Can you think of an "antihero" in fiction or in history? Who comes to mind?
Is there, in your opinion, one essential characteristic of a true hero/heroine?
Posted by Niki Turner at June 28, 2011