Behind the Wheel with Alice Ramsey: The First All-Female Road Trip

by Susanne Dietze
Alice Huyler Ramsey drove for miles, searching for the yellow barn without success. The  barn served as a landmark in an American Automobile Association’s guidebook, which motorists relied on for navigation back in 1909, but the brightly-painted building, which indicated she should make a turn, was not where the guidebook said it should be.

Little did Ramsey know that the pro-horse farmer who owned the barn painted it green in order to foil her attempt to be the first woman to drive an automobile across country. 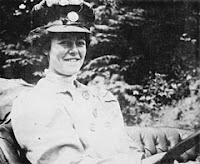 But not for long. As she would throughout the journey when she hit dead ends or rough terrain, Ramsey backtracked, corrected, and continued westward on an adventure of a lifetime.

Ramsey wasn’t out to prove anything. Making the 3,600 mile drive from New York City to San Francisco wasn’t even her idea. But it was one she embraced—and executed—with gusto, seizing the opportunity and letting it take her where it would.

In 1908, Ramsey’s husband John bought her an automobile.  Just 22-years old, she took driving lessons at the local Maxwell-Briscoe dealership in Hackensack, New Jersey and spent the summer putting 6,000 miles on her new car. After she participated in a 200-mile endurance drive, a Maxwell-Briscoe sales manager with the too-fabulous name of Cadwallader Washburn Kelsey saw an advertising opportunity in her, and he proposed the cross-country trip (all expenses paid, of course) to prove that a Maxwell was so safe and reliable, even a woman driver (!) could drive one across America.
Ramsey said “yes” and invited a few friends along: her sisters-in-law Nettie Powell and Margaret Atwood, and 16-year-old Hermine Jahns, none of whom could drive. On June 9, 1909, Ramsey kissed John goodbye, cranked the Maxwell’s engine, and set off from New York City.

On the road, Ramsey and her companions showed flexibility and resourcefulness. They slept under the stars some nights, and spent others in grand hotels when they paused for publicity stops (one hotel in Wyoming gave Ramsey a present to take with her: bedbugs). When restaurants or locally-offered home-cooked meals weren’t available, the ladies procured tins from general stores and picnicked alongside the road. 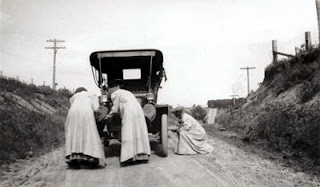 Ramsey changed a dozen flat tires, cleaned spark plugs, and ran out of gas—little wonder considering that checking the fuel tank required the removal of the entire front seat cushion. Another day, Powell and Atwood carried ditchwater to the radiator using their silver toiletries holders.

Needless to say, progress was slow. The car’s speed topped at 42 mph on the Cleveland Highway, but most of the roads Ramsey traveled were unpaved and landmarks weren't always reliable. Hired drivers and supporters guided Ramsey when possible, but she was often on her own regarding directions. A few protesters popped up along the way, but they were not against female drivers, as far as I can tell. Most of them, like the farmer with the yellow barn, were pro-horse.

Aside from dealing with the car, Ramsey had almost-daily meetings with the press and found herself in danger more than once. Her path crossed a manhunt searching for a killer in Nebraska, and in Nevada she and her friends were surrounded by a Native American hunting party.

Ramsey and her companions arrived in San Francisco on August 10, 1909—59 days after they set out. Both driver and sponsor seemed pleased with the result of the trip. Maxwell-Briscoe saw an increase in car sales, and Ramsey (who got to keep the car) and her friends returned home, proud of their accomplishment. Ramsey settled back into her life, bore two children, and in 1917 her husband John was elected to Congress. He never learned to drive, relying on his wife, who continued driving until her death in 1983. 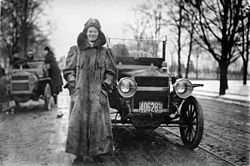 In 1961 she published the story of her journey, Veil, Duster, and Tire Iron, one year after she was named AAA’s “Woman Motorist of the Century.”

I like to think of her as much more than a motorist, however. Alice Ramsey was presented an opportunity for adventure doing something she enjoyed, and she embraced it. She persevered, even when others tried to make things difficult.  Her husband’s support, the fellowship of friends, and the reminder of her goal no doubt made the difficult times more tolerable. She kept on driving, sometimes off course, but she kept moving.

And she didn’t turn back.

Serious Question: The story about the farmer painting his barn green to thwart Alice made me think about her mettle. When someone disapproves of you or makes accomplishing your goals difficult, are you disheartened or energized to prove them wrong?

Fun Question: Have you taken a memorable road trip? Where did you go and what did you see?

Susanne Dietze has written love stories set in the nineteenth century since she was in high school, casting her friends in the starring roles. Today, she writes in the hope that her historical romances will encourage and entertain others to the glory of God. Married to a pastor and the mom of two, Susanne loves fancy-schmancy tea parties, travel, and spending time with family and friends. Her work has finaled in the 2010 Genesis Contest, the 2009 Gotcha! Contest, and the Touched By Love Contest, 2008 and 2009. You can visit her on her personal blog, Tea and a Good Book, http://www.susannedietze.blogspot.com/