A Harvest of Hope

﻿
﻿In keeping with the theme of the busyness that consumes our lives, I almost forgot I had signed up for today's devotional. I was so busy, you see...

For anyone who has slept through the past month, I have a book out right now. (Redeeming the Rogue. Available at Walmart, Amazon, Barnes and Noble, etc., etc.) Remind me to schedule my books for release in the winter from now on. August, you see, is harvest season. 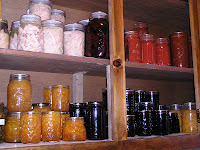 No, I'm not a farmer, but I'm not far removed from my farming roots. I have a vegetable garden, fruit trees, and berry bushes. I frequent U-pick orchards for those things I don't have. And then I fill my pantry and freezer.
The ancient Israelites were an agrarian culture. Unlike their nomadic ancestor Abraham who lived in a tent and traveled from place to place, they built fortified cities. Their law contained specific provisions relating to the inheritance of land and reserving part of their harvest for God, the priests, and the poor. We see an example of both laws in practice in the world's first inspirational romance novel -- the book of Ruth.

As I was attempting to juggle my hours among canning jam, chauffeuring kids, and writing a novel last week, my mind kept returning to Ruth. I love that story. I always try to imagine what must have been going through Boaz's mind that day he looked out at his grain field. He'd grown up in Bethlehem--spent his whole life there, most likely. It was a small town where everyone knew everyone else. There are no secrets in a small town. As the country song says, "Everybody dies famous in a small town."

And then one day at the height of the harvest, Boaz noticed a woman he'd never seen before. She was young, poor, and diligent--a foreigner who left her people and religion behind. The more he learned about her, how she had left her own country to care for her mother-in-law, the more intrigued he became. Of course, he married her at the end of the book. (As I said, the world's first inspirational romance.) They had a son, who had a son, who had a son -- who became a king.

I admit, the romance draws me back to that story over and over--not necessarily a good thing because it keeps my focus off the more important message of God's provision.

God gave the Israelites specific instructions for taking care of the poor, both Jewish and foreign. The law forbid landowners from completely reaping a field, orchard, or vineyard. They weren't to harvest the edges of fields, beat olive boughs more than once in a season, or pick up what fell to the ground.

Ruth followed behind the harvesters, gleaning what they left behind. It was hard, hot work that lasted from morning until evening and yielded meager results for the amount of labor expended. But God took care of Ruth. He rewarded her tenacity and compassion by providing her with far more than her daily bread.

Isn't it interesting that God didn't instruct the people to just give the poor part of their crops? God provides for our needs, but He expects us to do our part. From the very beginning, even when all was good in the Garden of Eden, God expected Adam to care for the garden.

In the last two weeks, we've been buffeted by a fresh round of dire economic news: a shaky stock market, the financial and societal chaos in Europe, predictions of another rise in unemployment over the next twelve months, ballooning debt. When the bad news seems overwhelming, we need to reconsider the Old Testament lessons. Work diligently. Take care of each other. And trust God to provide for our needs.

Have you seen God's providence during difficult economic times? Can you suggest some ways God can use us to minister to others who are suffering economic hardship?

After leaving the corporate world to stay home with her children, C.J. Chase quickly learned she did not possess the housekeeping gene. She decided writing might provide the perfect excuse for letting the dust bunnies accumulate under the furniture. Her procrastination, er, hard work paid off in 2010 when she won the Golden Heart for Best Inspirational Manuscript and sold the novel to Love Inspired Historicals. Redeeming the Rogue is an August, 2011 release. You can visit C.J.'s cyber-home (where the floors are always clean) at cjchasebooks.com
Posted by C.J. Chase at August 21, 2011