by DeAnna Julie Dobson
Practically everyone knows about Agatha Christie, the multi-million-selling mystery writer. If you are a fan of the golden age of crime fiction, you're probably very familiar with her work and the work of Dorothy L. Sayers. Their creations, Hercule Poirot, Miss Marple and Lord Peter Wimsey among others, are justly celebrated. But who today remembers there was a third, to my mind equally great, lady who was their mystery-writing contemporary in the 1930s, '40s and '50s, the wonderful Margery Allingham? 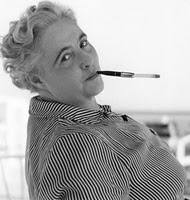 Perhaps I'm the only one who missed out, but after years of enjoying Christie and Sayers, I only relatively recently discovered Allingham and her delightful creation, Albert Campion. Campion, of course, is not his real name. His noble (perhaps royal?) relations would have been shocked to have their name bandied about in the newspapers in conjunction with Albert's crime-detecting adventures, so he chose a pseudonym. One, as we come to find out, of many. 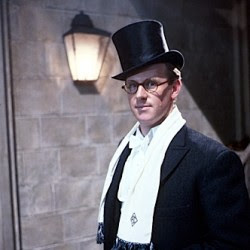 In fact, one of his most successful methods of solving cases is to hide who he is, convincing everyone around him that he is inoffensive, bland and unintelligent, hiding his sharp mind and his dogged determination to find the truth. His manservant, Magersfontien Lugg, who was a cat burglar "until he lost his figure," is a Cockney delight and well worth the price of admission all by himself. 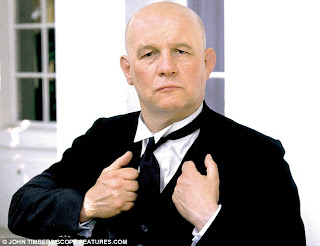 Together, Campion and Lugg solve some of the most wonderfully plotted mysteries I've ever read. In my opinion, they surpass some of Christie's and Sayers', and are consistently excellent. And, the icing on the literary cake, eight of the twenty-one Campion novels were made into movies for the BBC. Peter Davison ("All Creatures Great and Small," "Dr. Who" and "The Last Detective") and Brian Glover (specializing, as he liked to say, in playing "bald-headed, rough-looking Yorkshireman") were pitch perfect as Campion and Lugg and, in true BBC fashion, the sets, costumes and supporting actors bring Allingham's books and the 1930s to brilliant life.

I can't recommend this series (the books and the videos) highly enough, though I haven't yet had the chance to read the last seven books (drat those deadlines!). Officially, the first book is The Crime at Black Dudley, but don't judge the series by that one. Campion is only a rather eccentric supporting character in it. He really hits his stride in the second book, Mystery Mile, and just gets better and better from there.

So, if you like an intelligent, authentic period mystery with a plot that meshes like the gears of a fine watch, check out Margery Allingham's Albert Campion. You won't be disappointed.