Have you ever attended a party in a carriage?

Well, don your best traveling costume and hop on in, because we're on the move today, from colonial Virginia to Regency England...evading danger, solving mysteries, and maybe encountering a bit of romance. (Oh, of course there's romance! Who do you take us for, anyway?)
Get ready for two times the excitement as we celebrate a double-Release Party...

Both Inkies' historical romances release tomorrow, Feb. 5, but we just couldn't wait to get the party going.

In the spirit of all good parties, contemporary and historical, there will be delightful nibbles and noshes served while we travel along these unpaved, rutted byways. What pretty scenery we pass through! With all of this green, we could very well be in either Virginia or England, where the novels are set (convenient, don't you think?).

Oh my, the carriage is pulling to a stop. Is the ride over already? Nonsense! We're pausing to accommodate the arrival of our waitstaff.

Why, there's Graham Sinclair, hero of Lisa's book, The Magistrate's Folly. I see he's keeping the tea tray perfectly balanced as we resume our ride down the road.

And here is our pastry server, looking very serious as he prepares to offer us a selection of sweets. 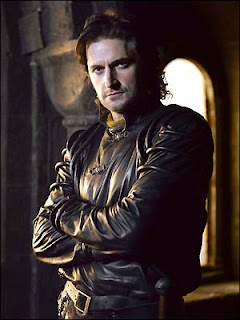 This is far more enjoyable than eating fast food in the car!
Something curious has happened. We're no longer alone on this country road. Say...There are magistrates in both of these books. Are we in some sort of legal trouble? Why else would we have picked up a military escort? (British, of course.)

Ah, I hear music. That explains everything. Look who's marching alongside our carriage for our entertainment.


What a divine road trip! More tea! I'm so glad we aren't in danger like the heroines of Lisa and C.J.'s books.

Speaking of our poor heroines, what sort of trouble are they into, anyway?

Alone in a gentleman's bedchamber, rummaging through his clothing—governess Leah Vance risks social ruin. Only by selling political information can she pay for her sister's care. And the letter she found in Julian DeChambelle's coat could be valuable—if the ex-sea captain himself had not just walked in.


As a navy officer, Julian knew his purpose. As a new earl, he's plagued by trivialities and marriage-obsessed females. Miss Vance's independence is intriguing—and useful. In return for relaying false information, he will pay her handsomely. But trusting her, even caring for her? That would be pure folly. Yet when he sees the danger that surrounds her, it may be too late to stop himself….

Oh my, our two heroines do have a bit of a bumpy road ahead, don't they?

The carriage will make a circuit around the park all day. Feel free to read, enjoy more biscuits, and view the lovely scenery.

Should you choose to descend from the carriage, be sure to allow one of the waitstaff to assist you. Then come back all week to learn more about our Double Releases! And be sure to leave a comment, including your email address, to be included in a drawing for a giveaway of Lisa's book.

Would you rather purchase? Lisa and C. J.'s books are available on Amazon and wherever inspirational fiction is sold.