Snow on the Tulips

In a Christian romance market dominated by the great trifecta of prairie, Western, and Amish settings (with an occasional Regency tossed in for “variety”), something different is reason to celebrate. That said, I’ve been rather ambivalent about the recent rise of WWII romance novels. I haven’t quite pinpointed my reason, although I have some theories.

First, I don’t really consider WWII far enough in the past to be truly historical. Factor in the cars, planes, short skirts and authentic video footage of major events, and WWII really wasn’t that long ago. No, I’m not that old (even if I might feel like it some days), so the setting doesn’t feel contemporary either. However, I lived close enough to the events there was a constant stream of books and movies and newspaper articles about the war for pretty much my whole life. It has just always felt…near.

Then there are the lengthy separations. A romance needs a hero and heroine who spend time together so that the reader ends the book convinced these two people belong together. That’s just hard to arrange in a war-time setting. (It’s also probably one of the reasons I prefer settings dealing with the personal and societal changes that happen in post-war years.)

And let’s face it, the military uniforms of WWII are just not as attractive as those of the Regency era. Go ahead. Call me shallow. But you know it’s true.
With all that said, however, when I learned about a recent novel titled Snow on the Tulips, I knew I just had to get it. For one thing, the book takes place in Friesland, and I haven’t read a Friesland setting since…never. For another, the 1945 end-of-the-war time period and Resistance hero/local girl heroine solves the problem of lengthy separations. Furthermore I had recently been reading (non-fiction) about the Hongerwinter (Hunger Winter) of 1944-1945, so the setting felt more accessible to me than it otherwise might have.

Because of the unusual setting, let me begin with a short geographical background. Friesland is the northwestern-most province in the Netherlands. Though technically outside the Dutch Bible Belt (yes, there really is such a place, and it even has its own Wiki entry), it is primarily rural and has more in common with the conservative parts of the country than the anything-goes Dutch cities like Amsterdam. It’s also a little different ethnically from the other provinces. The Netherlands might be a small country, but surprisingly it has two official languages: Frisian (spoken almost exclusively in Friesland) and Dutch (spoken everywhere).

After the invasion of France on D-Day, the Allied forces pushed into the southern part of the Netherlands by late 1944. However, the offensive stalled out for the winter, leaving the northern provinces under Nazi occupation for another six months. Food became so scarce that winter that approximately 22,000 Dutch died of famine during the Hongerwinter. Being rural, Friesland didn't suffer from the extreme deprivations felt elsewhere. However, as the Nazis became more desperate, their actions became even more cruel. 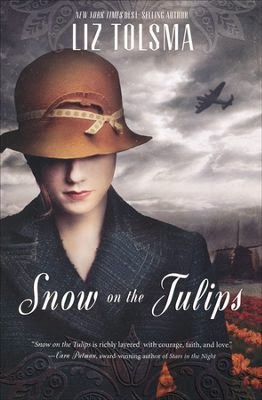 A stranger’s life hangs in the balance. But to save him is to risk everything.

The war is drawing to a close, but the Nazis still occupy part of the Netherlands. After the losses she’s endured, war widow Cornelia is only a shadow of the woman she once was. She fights now to protect her younger brother, Johan, who lives in hiding. When Johan brings Gerrit Laninga, a wounded Dutch Resistance member, to Cornelia’s doorstep, their lives are forever altered. Although scared of the consequences of harboring a wanted man, Cornelia’s faith won’t let her turn him out.

As she nurses Gerrit back to health, she is drawn to his fierce passion and ideals, and notices a shift within herself. Gerrit’s intensity challenges her, making her want to live fully, despite the fear that constrains her. When the opportunity to join him in the Resistance presents itself, Cornelia must summon every ounce of courage imaginable. She is as terrified of loving Gerrit as she is of losing him. But as the winter landscape thaws, so too does her heart. Will she get a second chance at true love? She fears their story will end before it even begins.

The book opens with a short glossary of approximately 40 Dutch, Frisian, and German words used throughout the book, and I need to add a disclaimer of sorts. Though my Dutch ancestors did not emigrate from Friesland (they came from the southwestern-most province), I grew up in a town settled by Frisians. That, combined with my years in a Dutch-background church, made many of the words already to familiar to me. I don’t think the author overuses the foreign words, but I can’t speak to the ease or difficulty others might have with the non-English words.

The initiating event of this book draws inspiration from a true story of a Nazi mass execution that left one of the victims (barely) alive. Widow Corrie DeVries lives in her deceased parents’ home with her 20-year-old brother Johan. The Nazis have been conscripting all the young (and not-so-young) men, so Johan is pretty much restricted to the house (and the hidey hole under the house whenever unexpected “company” shows up). However, like young men are wont, he seeks adventure, and he goes out after dark on the night the Nazis execute members of a resistance group. That’s how he comes to discover a lone survivor who is near death.

As you might guess from the book description, despite the setting of Nazi-occupied Netherlands, this is more of a slow, gentle romance than a thrilling adventure, and much of the conflict is internal. The book takes place over the course of several months, from February 1945 until the liberation of the Netherlands on May 5, 1945. Gerrit is a very injured (and wanted) man, so like Johan, he also spends a great deal of the book confined to Corrie’s house. Of course, the Nazis—realizing that they should have had one more body to bury—are looking for him, and they don’t have procedures for proper search and seizure in their legal codes. No, it’s not all slow and gentle.

However, it is mostly Corrie’s story, as her character has the furthest to go. Other than a love affair gone bad earlier in the war, Gerrit is pretty secure in who he is and what he believes. Corrie knows the Nazis are bad, but she’s afraid to do anything. I felt like this was perhaps the weakest part of the book. Corrie’s parents and husband are gone, she has no children, she has strong personal reasons to dislike the Nazis and wish to see their defeat, and she has a strong faith. Her brother is 20 and though in danger from discovery by the Nazis, he is old enough to take care of himself should something happen to her. She seems like she would be a great candidate to work for the Resistance (let's face it, we all know CJ likes feisty heroines who carry guns or commit treason), but like I said, this is primarily the story of Corrie learning to love again and trust God enough to become the woman she can be.

I read this on my Kindle, mostly because at $2.99, the cost was so much less. (Insert Dutch stinginess joke here.) At the time I’m writing this, the Kindle price is now $9.99, so I seem to have found it on sale. As my six-year-old would tell me, "Good job, Mama!" (Insert second Dutch stinginess joke here.) That said, the downside of a Kindle purchase is that you cannot pass the book along after you've finished, and I would dearly love to give this one to a friend who was born in Friesland. Ah, well. I suppose I could buy it for her as a gift, but I'm sure she'll understand if I just recommend it and tell her to get her own copy. (Insert final Dutch stinginess joke here.)

After leaving the corporate world to stay home with her children, C.J. Chase quickly learned she did not possess the housekeeping gene. She decided writing might provide the perfect excuse for letting the dust bunnies accumulate under the furniture. Her procrastination, er, hard work paid off in 2010 when she won the Golden Heart for Best Inspirational Manuscript and sold the novel to Love Inspired Historicals. Her current release, The Reluctant Earl, is now available  in online bookstores. You can visit C.J.'s cyber-home (where the floors are always clean) at www.cjchasebooks.com
Posted by C.J. Chase at January 17, 2014