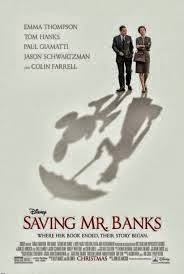 I don't see very many movies lately. Most of them just don't appeal to my "increasingly disenchanted with pop culture" self, but Saving Mr. Banks is one I looked forward to from the moment I first saw the trailer.
Saving Mr. Banks is the based-on-a-true-story story of how P. L. Travers' children's books came to the big screen. Walt Disney's daughters begged him to make their beloved Mary Poppins into a movie. He promised he would, and after twenty tumultuous years of trying, he finally got the uncooperative Travers to at least come talk to him about it.
Tom Hanks' Disney is just as warm and appealing as I remember him being when he hosted The Wonderful World of Disney on TV when I was a very little girl. And Emma Thompson is a wonder as Travers. You don't know whether to pity her, laugh at her or strangle her, though as an author, I can sympathize with her wanting to keep her characters true to her vision of them. (I don't think, though, should I ever have the opportunity of having a movie made from one of my books, that I would insist the color red not be used anywhere in it.)
Her sessions with the Sherman brothers, the ones who wrote the delightful music for the film, were great. In real life, she insisted on having them recorded, and it's interesting to listen to some of the original Travers recordings played during the closing credits of the film. It's really a miracle that they got anything done at all. But the brothers somehow take their nemesis with a good grace and even persuade her to dance to one of the songs.
But, sadly, she draws the line at the penguins. She doesn't mind that they dance (though she does wonder how one teaches live penguins to do so), but when she realizes they will be animated, that's the last straw. She absolutely refuses to have any animation in her film. None. So back she goes to England, refusing to give up the rights to her story and characters.
But Walt, determined to keep his promise to his daughters and because, I suspect, he has seen that this truly is important to Mrs. Travers, too, follows her across the Atlantic. He tells her of his own less-than-ideal childhood, and assures her that he understands what her story is about.  Not about saving the children, but about saving Mr. Banks.
"George Banks will be honored," he assures her in a scene that reduced me to tears. "George Banks will be redeemed. George Banks and all he stands for will be saved. Maybe not in life, but in imagination. Because that's what we storytellers do. We restore order with imagination. We instill hope again and again and again."
Those lines really resonated with me. As a writer who has often made her own life bearable by restoring order with imagination, I couldn't help but be touched. And I cried when, after finally giving Disney permission to do the film, Mrs. Travers eventually attended the premier of Mary Poppins, animated dancing penguins and all.  And I cried with her when she saw Mr. Banks and his wife and children go kite flying, a happy family at last.
Mr. Banks (and P. L. Travers' and Walt Disney's fathers to boot) saved.
Order restored.


Have you seen Saving Mr. Banks? What did you think of it? What's the best movie you've seen lately? 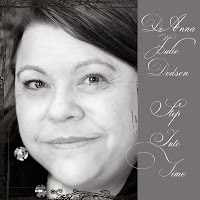 DeAnna Julie Dodson has always been an avid reader and a lover of storytelling, whether on the page, the screen or the stage. This, along with her keen interest in history and her Christian faith, shows in her tales of love, forgiveness and triumph over adversity. She is the author of In Honor Bound, By Love Redeemed and To Grace Surrendered, a trilogy of medieval romances, as well as Letters in the Attic, The Key in the Attic, The Diary in the Attic and The Legacy in the Attic, contemporary mysteries. Her new series of Drew Farthering Mysteries debuted in the Summer of 2013 with Rules of Murder, to be followed by Death by the Book and Murder at the Mikado in 2014 from Bethany House. A fifth-generation Texan, she makes her home north of Dallas with three spoiled cats
Posted by DeAnna Julie Dodson at May 28, 2014