It's one of America's greatest, most time-honored backyard cookout and fast-food chain traditions. Where did this delicious delight originate?Claimants have arisen over the decades since the hamburger entered our lexicon palate-icon, each with an energetic backing. Some with historical society stamps of approval. 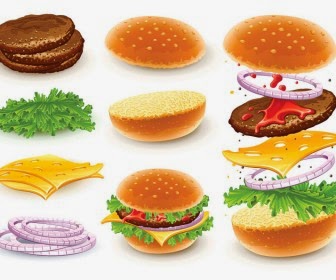 Claiments 1-4, according to history, served steak sandwiches (meat slapped between bread). Impressed with Mr. Fletcher Davis's lunch counter, folks funded his trip to the 1904 World's Fair in St. Louis. There Uncle Fletch, as he was known in Athens, set up a stand near the midway and sold his burgers. Impressed with this new delectable, New York Tribune reporter interviewed Uncle Fletch, who explained that his fried-potato recipe came from an old friend who lived in Paris (Texas, that is). The reporter, unfamiliar with Texas towns, dubbed the side dish "French fried potatoes."

McDonald's, the world largest hamburger vendor, embrace Uncle Fletch as the likely inventor. In 2006 the legislature of the great state of Texas passed a resolution recognizing Fletcher Davis, the originator of the hamburger.

Just goes to show one doesn't have to be a da Vinci, Einstein, Theresa, or Gandi to make the world a better place. Gina Welborn wrote public service announcements for a news radio station until she fell in love with writing romances. Her Barbour novellas can be found in HIGHLAND CROSSINGS, A CASCADES CHRISTMAS, and ECPA-bestselling MISTLETOE MEMORIES. The year 2014 ushers in the release of her novels: THE HEIRESS'S COURTSHIP, THE MARSHAL'S PURSUIT, and MASTERPIECE MARRIAGE. A moderately obsessive fan of Community, Teen Wolf, and Once Upon a Time, Gina lives in Oklahoma with her pastor husband, their five Okie-Hokie children, a box-lab, fifteen rabbits, three guinea pigs, and a fancy Russian dwarf hamster named Tom Bob Deucalion.

**Tonight Gina Welborn's family will be having meatloaf with a side of hash and grilled asparagus instead of hamburgers and fries.
Posted by Unknown at May 07, 2014