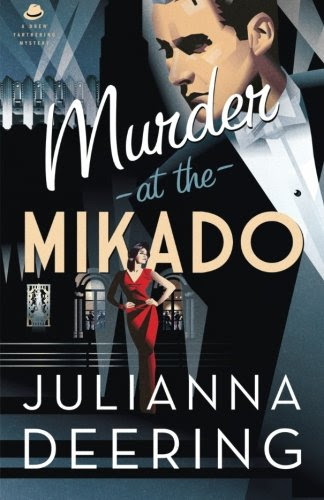 What makes a good mystery novel? A murder most foul, confusing clues, red herrings, danger and a seemingly impossible-to-solve puzzle unraveled by a likable sleuth (and his/her helpful assistants, of course). Julianna Deering's latest Drew Farthering Mystery, Murder at the Mikado, has all my criteria in spades, set on a grand estate in a charming English village during the swanky 1930's Art Deco period.

But before I get carried away, here's the blurb on the back of the book:

When a celebrated actor is found murdered in his dressing room, all signs point to Drew's old flame. But behind the curtains nothing is what it seems and this quickly becomes his most puzzling case yet.
Just as Drew Farthering thinks his life has calmed down some, Fleur Landis, a former girlfriend, reappears, in dire need of his help. She's married now, no longer an actress--but the lead actor in her former troupe's production of The Mikado has been murdered, and Fleur is the police's number one suspect.

Drew would rather focus on his fiancée, Madeline Parker, and their upcoming wedding, but he can't leave Fleur and her family in the lurch--even if she did break his heart once. As Drew, Nick, and Madeline begin investigating, they discover more going on behind the scenes of the theater troupe than could ever have been imagined. It seems nearly everyone had a motive, and alibis are few and far between.

Both the murder case and the presence of the beautiful, exotic Fleur put a heavy strain on Drew and Madeline's relationship. Will their still-young romance survive the pressure?

After reading the previous two Drew Farthering Mysteries, I expected Drew to be up for more investigating. I should have known this next investigation might cost him dearly. When the fabulously-named Fleur Landis shows up begging ex-flame Drew's help clearing her name, something about her raised my hackles (as it were)--and those of Drew's sweet fiancée, Madeleine. It's not pretty.

Neither is the murder, nor the ones that follow (should that have been a spoiler alert? One sort of expects more than one dead body in a murder mystery, doesn't one?).

Drew and Madeleine's relationship is put to the test. However, Drew is compelled to continue the investigation, despite the damage it's causing his relationship with Madeleine.

One of the threads in the novel's tapestry is the Gilbert & Sullivan productions put on by the theatre company, including musical comedy The Mikado.

There's nothing comic about the murder of the troupe's lead actor, however, nor in the secrets Drew uncovers as he investigates. There's a lot on the line, and not just for Drew and Madeleine. Drew, Madeleine, and Drew's faithful friend Nick struggle to solve the case, set to the tunes of Gilbert & Sullivan.

One of the things I loved most about this book is the growth of the characters. They aren't flat, two-dimensional sketches, but evolving, conflicted people with scars, flaws, and hard choices. The main characters rely on their Christian faith, which I appreciate.

Meanwhile, the plot is twisty and tricky, the setting fun, and the murders gruesome and in need of justice. Just what I look for in a good murder mystery--and just what Deering delivers yet again.

Note: I received a copy of this book from the publisher, Bethany House, in exchange for my honest review. A positive review was neither expected nor promised.

***
Susanne Dietze enjoys a good mystery but writes nice, bloodless romance novels. You can visit her on her website.
Posted by Susanne Dietze at July 04, 2014