Cherry Blossoms in the Storm

Today I'd like to welcome Bob and Gail Kaku, a husband and wife writing
duo, whose first historical novel, Cherry Blossoms in the Wind has
just released. I had the pleasure of participating in a critique group with
Bob and I can attest that this story is fascinating. The authors are close
enough to the subject matter that they bring an unmistakeable ring of
authenticity to the tale as they explore the different experiences of
Japanese Americans in World War II. 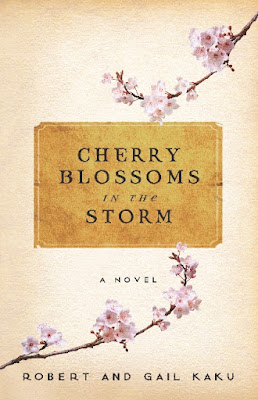 Here's a short synopsis of the story:

Caught in the cataclysm of World War II, three Japanese American
brothers find their lives turned upside down. Akira Omura, the eldest,
is trapped in Japan in the aftermath of Pearl Harbor and is later forced
to serve in the Japanese army. Complicating matters is a love triangle
between Akira, his beautiful fiancée, Emiko, and her former suitor,
Hiroshi Yamada.

In the United States, anti-Japanese hysteria runs rampant on the West
Coast, and the family is forced to evacuate from their home to a
temporary incarceration facility at Santa Anita Racetrack in Southern
California and then later imprisoned in an internment camp at Heart
Mountain, Wyoming. Life behind barbed wire is brutal and
de-humanizing conditions. Middle brother, Tad, believes the only
hope for freedom is to serve in the U.S. Army. Youngest
brother, Danny, fiercely protests against the government’s plan to
draft Japanese American men while their families are still imprisoned,
and ends up in a federal penitentiary.

All three brothers have their spiritual mettle tested. Akira in Japan
introduces his fiancée to Christianity, which is essentially illegal in
wartime Japan, and the Kempeitai (secret military police) persecute
Christians for their faith.  Tad prays for the wounded on the
battlefield and leads some men to the Lord. Danny drifts away from
his faith.  When he discovers the woman he loves is dying from
tuberculosis,  he desperately cries out to God. She receives a
miraculous healing and he rediscovers his faith.  The Omura brothers
traverse oceans and the even wider chasms of prejudice, hatred, and
separation from loved ones, risking their lives to seek freedom and
hope for the future.

Why I wrote this book?

World War II continues to be remembered as a significant epoch in
United States history. Seventy years later, the war continues to evoke
emotional responses from not only those who experienced it, but also
from succeeding generations who have studied and understood its
indelible imprint on humankind.

We’re proud of our heritage. We wrote this novel to honor the Nisei—
second generation—and Issei—first generation—Japanese Americans.
They lived through a time of extreme prejudice and discrimination,
even before World War II.  Unlike immigrants from Western and
Northern Europe, Issei were not allowed to become naturalized
American citizens. They were also prohibited from purchasing land
in California, although some got around this restriction by acquiring
land under the title of their American-born children.  Employment
opportunities were extremely limited as well. Bob knew an older
Japanese American man who had graduated with an engineering
degree from MIT in the 1930s. However, this man became a landscape
gardener. No company would offer him an engineering job, because he
was Japanese American.

While there are many nonfiction books about the lives of Japanese
Americans during WWII, there aren’t many novels. Recently, there
have been a few published, such as Bridge of Scarlet Leaves by
Kristina McMorris, whose mother is Japanese.

To my knowledge, we know of no other similar novels written from
a Christian perspective. Cherry Blossoms in the Storm is unique.  This
is important, because statistics show that less than 5% of Japanese
Americans are Christians. So, we thought why not deliver the Gospel
message by subtly wrapping it within an entertaining novel.

In addition, less than 1% of people in Japan are Christians.  I don’t
know whether this book will ever be translated into Japanese nor
whether it would be well received in Japan.  I’ll have to see how the
Lord leads in this area.

Writing a book with your spouse

Writing a book with your spouse is not for the faint-hearted. It’s
somewhat akin to trying teach your spouse how to drive, if you can
imagine that.  Cherry Blossoms in the Storm is the third book we’ve
written together. Giving and receiving critiques to and from your spouse
can be brutal. When you’re married to your coauthor, the veneer of
politeness quickly gets rubbed off, and there are some days when you’re
extremely upset with each other.  I’d like to say, “Don’t try this at home,”
but then, where else would you try it?

All you can do is to try to be honest without being too mean and try to
praise your spouse when he or she has written something particularly good.
And, of course, praying and praying together helps immensely. 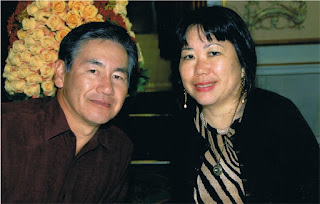