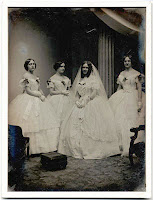 In 1852, Luke Longley must find a bride by the end of the month, or return East to explain to the mission board why he hasn't married. He hears a single female missionary is working a hundred and fifty miles downriver at Belle Prairie, so he sets out to convince her to marry him. When he arrives at Belle Prairie, he discovers there is not one--but four single ladies--and all of them are eager to marry and stay on the mission field. Now he only has a week to decide which one is right for him.

Four Brides and a Bachelor is inspired by a true story. Years ago I came across a letter written in 1852 by one of the single female missionaries, Miss Harriet Nichols. She wrote about the event and told her brother: "There was romance enough acted here to write as good a story as you will find in any novel." The story is set on Belle Prairie, in central Minnesota, and is named by the French for it's beauty. The actual location is now a county park, and it continues to draw visitors seeking a bit of respite. The land hugs the Mississippi River, and has a profusion of lovely flowers throughout the summer.

My hero is Luke Longley, a missionary who has been in Minnesota Territory for two years. He grew up in the Boston, the son of a prominent minister. His father's congregation kept a close eye on him, and he was chastised for any mistake he made. When he went to college, he rebelled, and his parents were called in to set him straight. He brought shame to his father, and swore he would follow all the rules from that day forward. Now, as a missionary, he's been instructed by the mission board to find a wife--or return east. There is no other option in his mind, but to follow the board's wishes--no matter the cost. His favorite hobby is fly-fishing, which he does on the river every day. He's much rather be fishing than courting four prospective brides! He travels from the Red Lake Indian Mission by birch bark canoe down the Mississippi a hundred and fifty miles to Belle Prairie. It's the only logical mode of transportation for him to reach his destination. If he can get in a little fly-fishing on the way, he considers himself lucky. 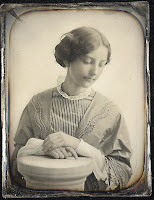 My heroine is Sarah Ellis, a brand new missionary at the Belle Prairie Mission in August of 1852. She has just come west, and has learned that she must marry by the end of the year, or she will be forced to return to Massachusetts, to a lonely, bitter father. Sarah is young, and full of zest for missionary life--but she tends to break rules and get herself into trouble. She doesn't set out to break the rules, but can't seem to do anything right. What she doesn't know is that the missionary directors advise Mr. Longley to consider the three other women over Sarah, because she's so young and inexperienced. Besides teaching, Sarah's main job at the mission is to sew, mend, and clean the clothing. Her favorite hobby is horseback riding along the river. She's riding her horse one day when she comes across Mr. Longley fly-fishing...
~*~*~ 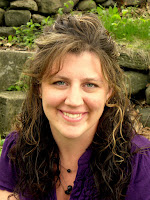 Gabrielle Meyer lives in central Minnesota on the banks of the Mississippi River with her husband and four young children. As an employee of the Minnesota Historical Society, she fell in love with the rich history of her state and enjoys writing fictional stories inspired by real people and events. Gabrielle can be found at www.gabriellemeyer.com where she writes about her passion for history, Minnesota, and her faith.

THE MOST ELIGIBLE BACHELOR ROMANCE COLLECTION

Meet nine men from bygone days who have all the qualities of a true hero and who all the single ladies wish to court—though some are unassuming and overlooked until their worth is revealed. The socialite, the architect, the doctor, the masked vigilante, the missionary, the postmaster, archaeologist, the wealthy widower, and the heir can have their pick of brides, but which one will they choose?


AMAZON - Print and Kindle
BARNES AND NOBLE - Print and Nook
Posted by Unknown at October 26, 2015