Sunday night, an era comes to a close when the final episode of Downton Abbey airs in the U.S. on PBS. (It has already been broadcast in the U.K., so no spoilers please, you lucky folks who have already seen it!) You remember your local Public Broadcasting Station, don’t you? You know, those fine folks who air documentaries and other shows for your elderly parents? In my house, PBS had pretty much become a kids-only network—a safe place for my youngins where the cartoons aren’t violent and the characters aren’t back-talking brats. We in the over-30 crowd got our entertainment elsewhere. At least, that was true until 2011 when a British period piece became a smashing success across the pond.

How did such a show become PBS’s most watched program in two decades? How about luscious costumes, witty lines, and delightful British accents for starters.

At its core, Downton Abbey is a soap opera, filled with drama, sparkling dialogue, and more drama. Don’t believe me? Just consider Lady Mary. The poor woman has had more affaires de coeur gone bad than a leopard has spots. And don’t get me started on unlucky Lady Edith! Her tragic love life is almost as depressing as the relentless calamities endured by the longsuffering John and Anna Bates.

Then add a large cast of characters and a glimpse of life in another time, both its good and bad, for both its rich and poor.

How big of a phenomenon is Downton? Well, there are the many “Which Downton Character are You?” quizzes such as those here, or here, or here. (All of which claim I’m either the dowager countess or the earl himself, so I guess I’m secretly nobility.) Of course, if you're not careful, you might end up being matched to one of Downton's many dead characters. This LA Times article lists them all. Or mostly all.

Then there were the many (and enormously funny) "If Downton were on Facebook" spoofs like this one: 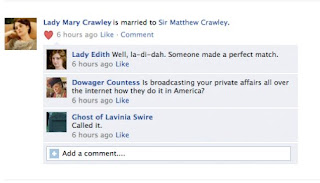 There were Downton spoofs for little tykes:

And their older siblings:

If you want to go "low brow" Downton:

There are Disney Downton spoofs:

And, of course, people around the world have created literally thousands of their own Downton spoofs, parodies, and tributes of varying quality, cleverness, and appropriateness. (The Downton theme song on an accordion? That's just so...wrong!)


So Downton, we bid you adieu. Sunday nights will never be the same without you.