Norfolk Harborfest was last weekend here, so I took my best camera (and the two boys who wanted to come along) to the "parade of sail." Five years ago, I put up some of my pictures from touring tall ships here at Inkwell when they were moored, but this time I hoped to catch the ships sailing. Unfortunately, we were too far upriver to get the full feel of the "Age of Sail" as the largest ships have to "shorten sail" (reduce the amount of sail so they catch less wind) when they get that far inland. If I'd known that, I'd have driven to a different vantage point. Still, I think I got some pretty good shots.

At certain points, the ships sailed in front of tall buildings on the other side of the Elizabeth River (in Portsmouth, Virginia). I'm going to put in pictures with the same buildings in the background, so you can use them as a reference point on the size of the various ships.

Are you ready to learn some cool nautical terms?

This is the Virginia, a replica of earlier ship that carried the same name. She (ships get a female pronoun in English) is a schooner. 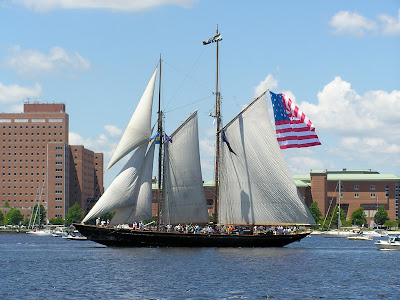 What is a schooner? Glad you asked. Schooners have two or more masts and "fore-and-aft" sails. Fore-and-aft is a description of the orientation of the sails. See how they are parallel with the length of the ship? The Virginia is 126' long and her mainmast (the tallest stick thing) is 108' high. Schooners were popular in the 19th century. The famous "Baltimore clippers" were schooners.


For some contrast, this is the USCGC Eagle. She is a barque. 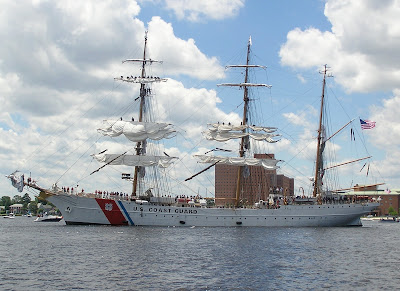 A barque is a ship with three or more masts and "square rig" sails. On a square rig ship, the "spars" (those cross bar things on the masts that the sails are attached to) are perpendicular to the keel. The keel is the long lower portion of the ship -- you know, the part you'd ride in if you were a passenger. The Eagle is operated as a training ship by the US Coast Guard, and she is 295' long. Her foremast (the tall stick thing by the bow, er, front) and mainmast (the tall stick thing in the middle) are 147' high. Can you see the sailors standing on the spars? They couldn't do that on the Virginia.


I zoomed in here to get a shot of sailors standing on the spars of the BAP Union. 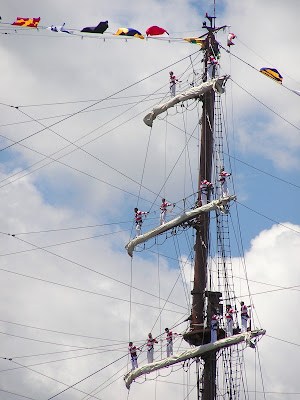 The BAP Union is a 379' long training ship operated by the Peruvian navy. I haven't been able to find a height for her tallest mast, other than that they must be over 200'. She is supposedly the second largest tall ship operating today. Here's a picture with the same building in the background and some other boats to give you an idea of her sheer size. 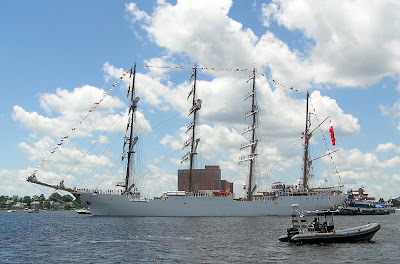 As you can tell from the building, I couldn't zoom in with the camera lens as I did for the Virginia. You can barely even see the sailors on the spars from this view.


Here's a smaller square rig ship. The Godspeed is a brigantine, a two-masted ship common in the 16th - 18th centuries. You may have read stories with brigantines as they were a favorite of pirates. 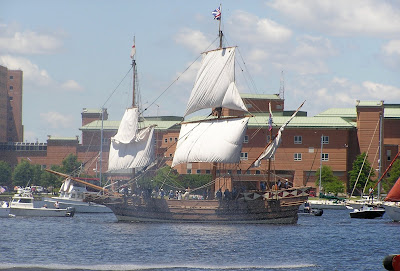 The original Susan Constant, Godspeed, and Discovery were the three ships that brought the original English settlers to Jamestown, Virginia in 1607. With a mere 88' length and a main mast less than 72' high, the Godspeed replica was the smallest of the tall ships, but her namesake has been on both a US postage stamp ($0.41 denomination in 2007) and US currency (on the reverse of the 2000 Virginia quarter).

Oh, and don't blame the photographer for the poorer picture quality. The fireboats were approaching when the Godspeed sailed by. There was no fire. They were just showing off, and they throw a lot of water into the air! (But the mist blowing in felt good on a sunny June day.) 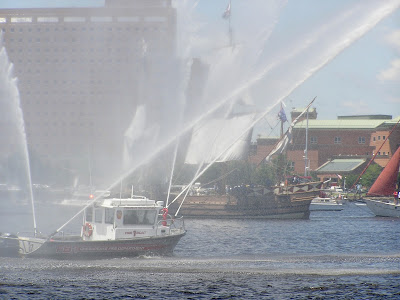 This is the Godspeed sailing the other direction after she had shortened sail. Her bow (forward part) is on the right side of the picture and her stern (rear) is on the left. (She also sailed closer to my side of the river, which is why the building in the background seems smaller.) 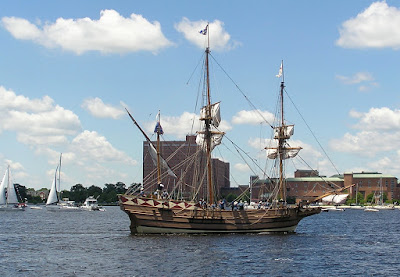 Flying the flag of Spain, El Galeon is a replica of another famous type of ship from the same era. 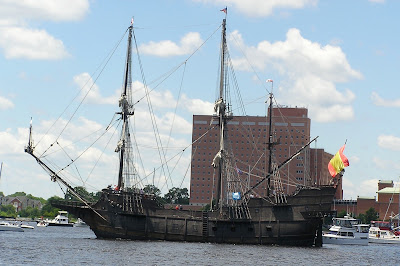 Galleons are square rig ships with three or four masts. Spanish galleons transported New World riches like gold and silver from the colonies to the mother country in the 16th and 17th centuries. They were more heavily armed than other ships of the time because they were a favorite target of pirates.


After a day watching tall ships. I have a terrible craving for a nautical-themed movie. But how to decide among Gregory Peck


You know, I shouldn't play favorites. I should just watch them all.