WRITTEN ON THE WIND by Elizabeth Camden, Reviewed by Paula, Winnie, and Rebecca #NewRelease 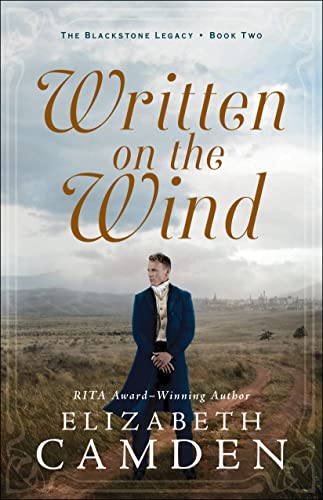 PAULA'S REVIEW:
Ms. Camden always manages to take privileged, socially prominent characters and give them substance, warmth and faith. This time the story is about Natalia Blackstone who oversees the construction project for the Trans Siberian Railway as she forges her way in the finance department of the bank her father owns.

There is so much history conveyed here. The author deftly weaves her story among real events, I still learn new things. I was curious about the Boxer Rebellion from a different perspective because my grandfather and his brother were missionaries to China and spent time as prisoners of war in Japan during this time.

My favorite character was Dimitri. A noble man who is loyal to his country, but won’t cover up an injustice, he is a mix of gentility and teasing little boy. He can be charming but when faced with adversity, he is resilient and incredibly strong willed. An unlikely match for the notable Natalie Blackstone, who is equally strong willed as she is establishing a foothold for women in the banking world. They find common ground as they fight for a worthy cause. “It takes two kinds of people to make businesses thrive. It takes dreamers and doers like you, and sensible people behind the scenes to make the dreams happen. That’s who we are. Romance and Reason. Fire and Ice.”

This is a sweeping saga that evokes many emotions. A worthy second book in The Blackstone Legacy. I cannot wait for the next book.
*I received a complimentary copy of this book from Bethany House on behalf of the author. I was not required to give a favorable review. All opinions are my own.* 5 Stars and an underpinning of faith


WINNIE'S REVIEW:
With dual settings in New York and Russia in 1900, Written on the Wind, the second book in The Blackstone Legacy series by Elizabeth Camden, is a masterpiece that solidifies Camden as one of my favorite historical fiction authors. Impeccable historical research is apparent throughout the story, and the historical notes in the back of the book add to an understanding of the events involved. I was vaguely aware of the Trans-Siberian Railway and the Boxer Rebellion, but I didn’t know much detail about them before I read this book.

Camden is a master at creating colorful, engaging, multi-layered characters and building a riveting tale around them. This story features Natalia Blackstone, a lead analyst in the Blackstone banking empire. She manages the bank’s investments in the Trans-Siberian Railway and strikes up a friendship through telegrams with Count Dimitri Sokolov who is overseeing the railway construction in Russia. When Dimitri witnesses a crime and ends up missing, Natalia steps in to find him. I loved the interaction between these two characters. Dimitri is so charming, humorous, endearing and courageous—a fantastic hero.

Suspense, intrigue, history, and romance combine with inspiration to make this book a captivating adventure and ensure its place on the list of my favorite books this year. It’s headed for my keeper shelf.
*I voluntarily reviewed a complimentary copy from Bethany House Publishing. All opinions are my own.

"That may be the most alluring statement since Cleopatra tempted Marc Antony to world domination."

After many months of transatlantic conversations, Natalia Blackstone and Count Dimitri Sokolov of Russia were finally going to meet face-to-face, unless the cryptic telegram that Natalia had received turned out to be a complete hoax. Half-starved and wearing the clothes of a thousand peasants, the elegance of Dimitri's persona seemed temporarily hidden, but a long way from dormancy. Being pampered was Dimitri's favorite past time and Natalia found that she loved showering the handsome, confident man with attention. After all, his harrowing experience would have completely destroyed a much weaker soul, but her count was nothing but strong in faith and character; after all he was still willing to lay down his life in order to influence a czar, if necessary; unfortunately, the repercussions of that intention might very well destroy everything that Natalia had worked so hard to accomplish.

Let me emphasize the fact that chivalry is alive and well! Dimitri's flamboyant pursuit of his "dearest Natalia" is a sight to behold, their chemistry practically pulsating off of every page. There's just this wee little problem, Dimitri's dream is to return to Russia and Natalia is just as determined to remain in New York. The question should be, what does God have in store for these equal opposites? Let's hope that Dimitri doesn't have to die in order to be heroic, for "what kind of symphony ends with lovers on the opposite side of the world"?

Brilliant contrasting characters, rich Russian history, and a story line that perfectly suits them both!
*I received a copy of this book from the publisher. I also purchased a copy. The opinions stated above are entirely my own. 4.5 stars

BackCover Blurb:
He carries a dangerous secret, but can he survive long enough to expose it?

Count Dimitri Sokolov has been charged with overseeing construction of the legendary Trans-Siberian Railway, but during this work, he witnesses an appalling crime, the truth of which threatens the Russian monarchy. In an effort to silence him, the czar has stripped Dimitri of his title, his lands, and his freedom . . . but Dimitri has one asset the czar knows nothing about: his deep and abiding friendship with Natalia Blackstone.

Natalia is the lead analyst for her father's New York banking empire and manages their investment in the Trans-Siberian Railway. Her bond with Dimitri has flourished despite the miles between them, but when Dimitri goes unexpectedly missing, she sets the wheels in motion to find him. Once they join forces, they embark on a dangerous quest in which one wrong move could destroy them both.

From the steppes of Russia to the corridors of power in Washington, Dimitri and Natalia will fight against all odds to save the railroad while exposing the truth. Can their newfound love survive the ordeal?