Research to a New Groove

“In 1806 Calcutta was at the height of its golden age. Known as the City of Palaces or the St. Petersburg of the East, the British bridgehead in Bengal was unquestionably the richest, largest and most elegant colonial city in India. Here a Nabob like Philip Francis could boast in the 1770’s that he was ‘master of the finest house in Bengal, with a hundred servants, a country house, spacious gardens, horses and carriages’. Francis’s ‘wine book’, which survives in the India Office Library, gives an indication of the style in which such men lived: in one typical month, chosen at random, Francis, his family and his guests drank…some 268 bottles in all… Nor was it just the British who did well and lived extravagantly: Bengal merchants also flourished. The Mullick family, for example had rambling baroque palaces strewn about the city, and used to drive around Calcutta in an ornate carriage pulled by two zebras.” P. 318, White Mughals, by William Dalrymple.


I love that image of a fancy carriage being pulled by zebras. So exotic!
Writers are often asked where we get the ideas for our stories. Well, a lot of things can spark a new idea. For those of us who write historicals that spark often comes when we are immersed in research. The internet is a fantastic research tool, but sometimes nothing serves the purpose but a book.
The world of history and biography has changed dramatically in the last decade. Many biographies read as well as a novel these days.
I’ve become enamored with using biographies to expand my understanding of time and place. The opening excerpt above is a jewel of description of a city in a moment of time that I had been having a great difficulty researching. The subjects of White Mughals are Major James Kirkpatrick, an official with the East India Company, and his Royal Indian bride Khair un-Nissa, in the late 18th and early 19th century. As the British Resident in Hyderabad, the largest free Indian state, at the time, he occupied a strategic diplomatic position. Unfortunately, my area of interest lay at the seat of company power, i.e. Calcutta. Still I obtained the book as a last resort, in the hopes of fleshing out my exceedingly meager image of the city circa 1800. I figured I might get a snippet or two of valuable info. 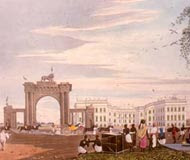 In the end I came away with way more than I expected. Did you know that the East India Company officials actually founded Calcutta and essentially built a European city in India? Did you know they were so concerned with the cleanliness of their city that they hired more than 700 ox teams and carts to go through the streets and clear away the debris each day. Yep, I found way more than I expected.
Writing historicals requires balance. We can overload a story with details until it reads more like a textbook. But they breathe life into a story if they are handled correctly. Does it matter that there were so many rubbish collectors in Calcutta? Probably not, but if I described a street scene that included lots of Indian style architecture, and dirty streets, I’d be wrong. Believe me, someone always knows when I’m wrong. And they love to point it out to me.
The thing about biographies is that they focus on people, whereas history books tend to focus on events. Author Laurie Alice Eakes recently shared this insight: “Writing a novel has to do with getting people right more than anything, and when you are writing about people in history, one has to understand that people thought and reacted differently two hundred years ago than they do now.”
I think she phrased that comment brilliantly. Human nature hasn’t changed, but the way people viewed themselves and the world certainly has. What was important to the people of a given time period and place? Many of those nuances are difficult to detect in a ‘regular’ history book, so where can we turn? In addition to biographies, Laurie Alice suggests trying to find primary

sources such as letters and diaries. They are often surprisingly easy to access nowadays
through http://www.gutenberg.com/ or Google Books. Such resources are invaluable for communicating a particular point of view through the writer’s own words.
And if I may put in a plug here? Laurie Alice’s next book The Glassblower will be coming out in December. One of the things I admire about Laurie Alice’s books is the way she writes strong heroines, without sacrificing their authenticity. She doesn’t just place a modern woman in a costume. She embraces the setting, including the social mores and mindset. Her characters are strong and relatable even when they don’t think and act as we would. That takes talent, my friend!
Since my discovery of White Mughals I have found several other biographies that have proven to be valuable resources. Think outside the box as you’re searching out that elusive bit of information that can make or break your scene. Just because a book doesn’t match the topic you are researching in every particular doesn’t mean you won’t find valuable information. So while we do have to keep our eyes on what we are working toward in our stories, don’t be afraid to explore a rabbit trail or two as well.
What is your favorite research tool? If you don’t write historicals what sort of research do you find most valuable?
Leave a comment on this post between now and 9/7/09 with your e-mail address included (include spaces or brackets around the "@" sign so Net spiders, etc, can't phish your address) and we'll enter you in two different drawings. One on 9/7 and also for one of the grand prizes which will be drawn on the first of November.
Posted by Lisa Karon Richardson at September 04, 2009