A young nun enters a convent, where she can only utter two words every ten years. 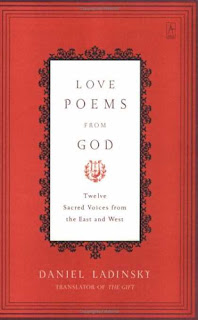 * * *
Hi, I'm Dina...but it's not about me...it's all about Jesus.
Queen Cleo of our thriving Inktropolis graciously allowed me to extend the boundaries of nonfiction to include “not fiction.” So, I’m very excited to share one of my favorite books: Love Poems from God. This collection of spiritual poetry by medieval writers centers around one of my favorite subjects: intimacy with God.
Now I realize not many people read poetry these days, but consider trying Love Poems from God. The medieval style is very straightforward and approachable, and the spiritual insights in this book will leave you amazed. Here are is an example:
Love is
the perfect stillness
and the greatest excitement, and most profound act,
and the word almost as complete
as His name.

Go ahead, read it again, two or three times, perhaps even out loud. All poems should be read several times to digest meaning on various levels. Think of the words, the sounds, the images, even the look on the page.

I should explain that only about half of the poets in this book are Christians. The Christian authors offer especially exquisite portraits of God, portraits that will be familiar yet leave you more passionately in love with God than ever before. Most of these poets are nuns and monks who were at some point tried for heresy but were later recognized as Catholic saints. It seems their seclusion and celibacy gave them special understanding into the true nature of intimacy with God. Take a moment to ponder these lines by St. Thomas Aquinas.
God then opened up and I entered Myself.
I entered Myself when I entered
Christ.

And having learned compassion I
allowed my soul
to stay.
Often we think of the medieval period as the “Dark Ages” and assume that Christianity was dead from the fall of the Roman Empire until the Reformation. This is far from true. Yes, there was much corruption in the church, but there were also amazing Christians who kept God’s Word alive for us in the convents and monasteries of Europe. While it’s unlikely that you will agree with all of their views, I think you will find much in this book that will bless you and expand your understanding of the divine.

However, I would encourage you to step out of your comfort zone and read the poems by the Eastern authors as well. I believe that our Father God graciously reveals Himself to all who seek Him, and you will find many fervent seekers among the poets in this book. The first poem above was written by Rabia of Basri, a Sufi Muslim.

When I read this book, I did it as a detective, searching for little clues that the true God, maker of heaven and earth, had revealed Himself to these people. For some authors I found none at all, for others I found excellent evidence. Rabia shares in one of her poems that she wept for years because God “did not enter my arms,” until one night He revealed that she had been calling Him by the wrong name. Although she kept His true name a secret, she ended the poem with the line, “All I can say is—it works.”

This was particularly meaningful to me because my husband is Middle Eastern, and I have heard numerous tales of entire Muslim villages coming to Christ through dreams and visions in recent years. It seems that God was equally active in pursuing Rabia of Basri over a millennium ago. Just remember as you read these poems that all “truth” must be evaluated by “The Truth” found in God’s Holy Word. If you stay in that mindset, I think you will be able to enjoy the lovely verses and find much that will speak to you. 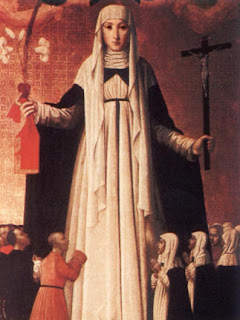 One common criticism of this collection is that the translator, Daniel Ladinsky, may have put too much of himself into the poems. I’m not sure if this is true, or if he just did an excellent job of translating the poems into our contemporary English for meaning rather than literally word for word. Either way, his are the most insightful versions of these poems I have ever found.


The authors and poems in this book provided much inspiration for my novel, Dance of the Dandelion, which is set in the medieval period. In fact, Love Poems from God includes poetry by one of my favorite women in history, St. Catherine of Siena, who I will be adopting as my alter ego here in “Inktropolis.” My fellow “Inkies” are looking forward with great anticipation to getting in a few good nun jokes on my behalf. It sounded like fun, so I thought I'd beat them to the punch.
On a more serious note, I leave you with this short poem written by St. Catherine.
“I won’t take no for an answer,”
God began to say
to me

when He opened His arms each night
wanting us to
dance.
Serious question of the day: What helps you to feel more intimate with God?
Non-serious question of the day: If Jesus was alive today, what kind of car do you think he would drive?
Also, feel free to share a favorite joke, nun or otherwise.
For a chance to win a copy of Beth Moore's Praying God's Word Day by Day please leave a comment on this blog. Be sure to include your email address so that we can contact the winner. Include spaces around the @ for your protection. Winner will be drawn at random on Septmber 18th. Everyone who leaves a comment and email will also be entered in our grand prize drawing on November 1st.
Dina L. Sleiman
http://dinasleiman.com/
Posted by Dina Sleiman at September 15, 2009