Every Christmas by around 11 AM, I look at the wrapping paper strewn over the family-room floor and I experience a little bit of letdown. All the planning, shopping, and decorating are over, and I feel a little, well, sad. I sometimes think it’s too bad we don’t keep Christmas a bit more like Jane Austen did. 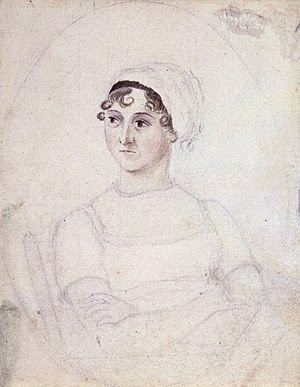 Image via Wikipedia
I’m not referring to donning empire-waist gowns and hunting for greenery in the snow with waistcoat- wearing gentlemen, although that would be lovely: Jane Austen (1775-1817) lived in Georgian England, an era I adore. But my interest in keeping Christmas like Jane Austen has nothing to do with a celebration of her novels, or my delight in her time period. It’s more that up until the Victorian period in England, the religious and festive celebrations of Christmas lasted twelve full days, from December 25 until January 5 – Twelfth Night, the eve of Epiphany, when the church remembers the magi’s visit to Bethlehem. Now that’s my kind of Christmas, long and lingering! No letdown for twelve days!

For Jane Austen, those twelve days were rich in parties and visits and merrymaking. For her fellow countrymen, the celebrations were sometimes made a bit more riotous by the Halloween-like theme of masquerading -- or reversing roles -- that was pervasive in Twelfth Night parties for centuries. In medieval and Tudor England, one lucky person (sometimes by design and sometimes selected by finding a bean baked into his slice of cake) earned the role of Lord of the Misrule (or Lord of the Bean, or Bean King), and he then presided over the festivities. Shakespeare’s play Twelfth Night follows the theme of role-reversals, as Viola dresses as a man and Malvolio, a servant, dreams of becoming a nobleman.

The idea of the world turning upside down for Twelfth Night endured through Jane Austen’s day. Children were included in Christmas balls, masques were fashionable, and role-playing games offered popular entertainment. Somewhat like a modern-day murder mystery party, guests at role-playing parties drew cards inscribed with names like “Signor Croakthroat” and “Madame Topnote.” Sometimes the names were paired, male and female, and the guests sought out their counterparts for the evening. Sir William Heathcote attended one such Twelfth Night party with Jane Austen when he was a boy, and he later recalled that she’d drawn the card for “Mrs. Candour,” fulfilling her role “with great appreciation and spirit.” I can just imagine her speaking about others in a stage whisper, remarking on their clothing or the behaviors she observed! 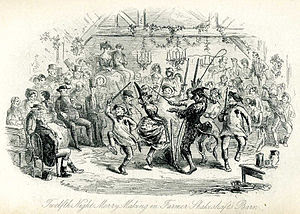 More intimate gatherings enjoyed Twelfth Night masquerades and frivolity, too. Jane Austen’s niece, Fanny, wrote to her old governess of her family’s Twelfth Night festivities, 1806, describing the roles taken on by each member of the family (Fanny was a Shepherd Queen that night). The family made merry in the orange-tree-decorated library, playing games like snapdragon, in which participants pluck raisins out of a bowl of flaming brandy, and bullet pudding, which involves a bowl of mounded flour topped by a bullet. Participants “cut” the "flour cake" and the person whose “slice” causes the bullet to fall from the top earns the disgusting-sounding job of retrieving the bullet with his mouth. But Fanny enjoyed it immensely, just like my kids probably would. Although I'm guessing Fanny wasn't the one who had to clean up the mess.

Festive foods were still consumed through Twelfth Night, including plumcake, warming soups, and Christmas puddings (according to her own recipe, Austen’s mother always prepared an extra pudding to have on hand for guests). And then there was the steady flow of alcohol. It’s interesting to note that many scholars believe the song “The Twelve Days of Christmas” was not, as some suggest, a coded ditty of Catholic theology, but rather a party game, testing the memory skills of the inebriated. There’s no conclusive proof either way, but no matter how the song came about, it’s been around for a few centuries, and today is “eleven pipers piping,” thank you very much.

By 1870, the practice of Twelfth Night was stopped and gradually, the festivities of Christmas ended for many at bedtime on Christmas Day. Those of us from liturgical churches still enjoy a twelve-day Christmas season with a bit of greenery and carol singing through the New Year, but for all intents and purposes, Christmas is over December 25.

Yet the message of Christmas – Jesus come to save sinners – isn’t limited to a day, or even December. And thanks to that realization, I’ve been inspired to keep Christmas going just a bit longer this year, in my heart and in my house. Jane Austen wouldn’t recognize my Nativity scene or my tree, but they’re both still up and being enjoyed until I pack them away on Twelfth Night.

So Merry Eleventh Day of Christmas, everyone!

My main source for this post was Jane Austen’s Christmas: The Festive Season in Georgian England, compiled by Maria Hubert, Sutton Publishing Ltd, 1996.

When did you take your Christmas decorations down?