That's my resolution for the new year. That's it.
The brevity of it terrifies me.

I entered 2011 in panic mode. This is the first time in decades I've started a new year without an arm's length list of resolutions. (Call 'em goals if you want, but it's the same basic idea.) This year, as I prayed and sought the Lord for His plan, asking Him what He wants me to do this year, I felt directed to the following verse:

Then they said to Him, "What shall we do, that we may work the works of God?"
Jesus answered and said to them,
"This is the work of God, that you believe in Him whom He sent."

What?
The disciples were looking for a to-do list, a checklist. They were Jews, and they were accustomed to lots of rules and regulations, lots of "dot the i's and cross the t's" religion. But Jesus turned that upside-down.
The work we're called to apply ourselves to is simple and straightforward: "believe in Him whom He sent." Believe in Jesus.
Believe in His work for us.
Believe in what He has accomplished, what He has entrusted to us.

Believe you are the person God has called to you to be - writer, musician, minister, mother, photographer, designer, administrator, teacher, athlete - and then act accordingly.

It sounds suspiciously like playing pretend, doesn't it? At least that's what our "rational" minds tell us. But faith says something else: 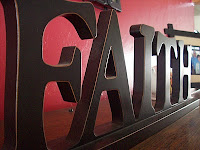 So, how can you apply "acting accordingly" to what you believe Jesus has done for you (or is doing in you and through you)?
Posted by Niki Turner at January 06, 2011