by Anita Mae Draper
When Debby Giusti and I were discussing her Author Memories blogpost, I suggested she post with us here at the Inkwell, as well. I was pleased when she chose the Faith day because I like to know about this aspect of the authors I choose to read.  Debby didn't disappoint and I'm blessed every time I read this post. I hope you are blessed as well. 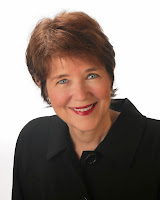 I carry a portable radio with me from room to room when I’m doing housework. Reception is good, and I’m able to listen to the music or news as I complete my chores. However, if I inadvertently place the radio near my cell phone or other electronic devices, static fills the airwaves and makes the program impossible to hear.
Long ago, televisions had the same problem. Growing up, I remember all too well the snow that clouded the TV screen when an electrical appliance—a razor, a mixer, a vacuum cleaner—was in operation nearby. Either the appliance causing the interference had to be turned off or an adjustment needed to be made to the television to bring the picture back into focus.
As writers, we know our writing clouds when we get off track. A secondary character takes over a saggy middle, the plot turns in a direction that doesn’t fit the storyline or our own writer ramblings and information dumps muddy the work’s clear creative flow. The solution is to refocus on the initial vision for the work, cut the parts that have strayed off course and rewrite until the story returns to the path it was originally meant to follow.
The same applies to our faith. The world around us clamors for attention and can interfere with our journey to the Lord. Busy schedules, troubled relationships, past hurts, financial concerns or worries about the future blur our focus and throw us off track. We need to keep our eyes on Jesus, but to do so requires clear vision.
Psalm 46:10 says, “Be still and know that I am God.” When my life seems hectic and the demands of the world pull me away from the Lord, I need to made adjustments. For me, sitting in His presence, whether at church or a quiet corner of my house, and tuning into His kingship over my life, clears the snow and stops the static. Once again, I can see through eyes of faith. I hear His voice and am ready to move forward on the path He has chosen for my life.
Can’t see the picture? Interference getting in the way? Turn off the distractions and focus only on Him.
How do you tune in Christ and tune out the world? What kind of static clouds your relationship with the Lord?
I’m giving away a copy of The Captain’s Mission, the second book in my Military Investigations Series. Leave a comment before midnight, Sunday, Nov 6th to be entered in the drawing.
Wishing you abundant blessings,
Debby Giusti
~~~~~~~~~~~~~~~~~~~~~~~~~~~~~~~~~~~
THE CAPTAIN’S MISSION, Love Inspired Suspense,
By Debby Giusti 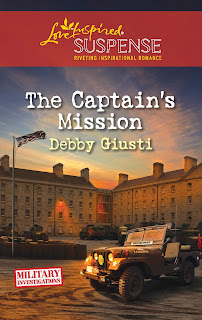 A DEMONSTRATION TURNED DEADLY.
When one of his soldiers is killed by live ammunition during what was supposed to be a simple training exercise, Captain Phil Thibodeaux wants answers. Even if it means working with the Criminal Investigation Division that seems certain to pin the blame on him. But after CID agent Kelly McQueen defends his conduct, Phil realizes that there’s more to the dedicated agent than meets the eye. Maybe she’s someone he can trust, after all. And he’ll need someone to rely on as investigations lead him to doubt everyone else—even his own soldiers.
Military Investigations Series
Book 1: THE OFFICER’S SECRET, May 2011, still available
Book 2: THE CAPTAIN’S MISSION, Oct 2011
Book 3: THE COLONEL’S DAUGHTER,Aug 2012
(Each story stands alone so the books can be read in any order.)
~~~~~~~~~~~~~~~~~
Debby Giusti is a medical technologist who loves working with test tubes and petri dishes almost as much as she loves to write.  Growing up as an Army Brat, Debby met and married her husband--then a Captain in the Army--at .  Together they traveled the world, raised three Army Brats of their own and have now settled in Atlanta, Georgia, where Debby spins tales of suspense that touch the heart and soul.
http://www.debbygiusti.com/
http://www.seekerville.blogspot.com/
http://www.craftieladiesofromance.blogspot.com/
Anita Mae says: If you want another chance to win Debby's book, head over to Debby's Author Memories blogpost about growing up at Fort Knox, Kentucky.
Posted by Anita Mae Draper at November 03, 2011