The Enchantress of Numbers

Forget this world and all its troubles and if

possible its multitudinous Charlatans – every thing

in short but the Enchantress of Numbers. 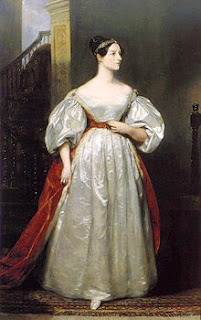 Just a month ago the world celebrated—perhaps celebrated is too strong a word—the world recognized—um, probably still too strong—a small portion of the world acknowledged or even realized that Ada Lovelace Day was underway.

In fact, when I found out my reaction was a very profound, “Who?”

Born Augusta Ada Byron, she was the only legitimate child of Lord Byron, the poet. She was a frail child, subject to headaches that disturbed her vision. When she was 13 she experienced a bout of measles that left her paralyzed. After two years she was walking with crutches.

Despite her frequent illnesses she kept up with her education—unusual in a girl of that time period. Her mother feared that Ada would go mad (something she suspected her father of having done long ago.) As a means of thwarting this tendency, she insisted that Ada have lessons in mathematics and science. Ada excelled at both.

When she was 16 she met Charles Babbage, the famed English mathematician, inventor and mechanical engineer. It was he that wrote the poem about her and coined the term Enchantress of Numbers. (And can I say, I just love that nickname. It would make a perfect book title!)

Ada married at the age of 19 and became Baroness King. Later her husband was elevated to Earl and she to Countess of Lovelace.

Between 1842 and 1843, Ada was asked to translate a memoir written by an Italian about Charles Babbage's newest mechanical design, the Analytical Engine. Ada agreed, and Charles also asked her to add some notes of her own. Once more she agreed and in doing so she wrote some algorithms for use of the new device. In other words, he designed the first computer, but she designed the first software.

How’s that for a blow to the stereotypical picture of a grubby little guy with poor hygiene working from his mother’s basement? The first computer programmer was an elegant and beautiful young woman. I love it! Her notes anticipated not just a tabulating function to the machine, but far ranging developments—even computer generated music. She saw vastly more potential in the machine than even it’s creator. And for that she is remembered as a visionary.

She died of cancer at just 36 years of age, or who knows what other contributions she might have made. Perhaps the computer age would have swept the world hundreds of years sooner.

All I know is that she is definitely going in the steampunk novel I’m writing! Just too good a character to pass up.

Oh, and Ada Lovelace day was supposed to celebrate women and their achievements in the fields of mathematics and science.

What “real-life” character would you love to see make a cameo appearance in a novel? 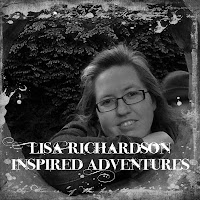 Influenced by books like The Secret Garden and The Little Princess, Lisa Karon Richardson’s early books were heavy on boarding schools and creepy houses. Now that she’s (mostly) all grown-up she still loves a healthy dash of adventure and excitement in any story she creates, even her real-life story. She’s been a missionary to the Seychelles and Gabon and now that she and her husband are back in America, they are tackling a brand new adventure, starting a daughter-work church in a new city. Her first novella, Impressed by Love, part of the Colonial Courtships collection, is coming in May, 2012.
Posted by Lisa Karon Richardson at November 08, 2011